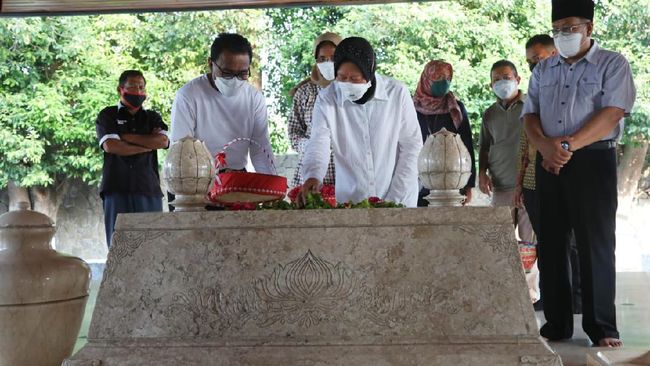 Minister of Social Affairs Tri Rismaharini say the President’s grave Sukarno it has not received any maintenance or repair since it was first inaugurated in 1979.

Risma admitted that she would carry out maintenance on the grave of the first president of Indonesia. This step, according to Risma, is also in accordance with the main task of the Ministry of Social Affairs in the field of heroism.

“Since it was inaugurated in 1979, Bung Karno’s grave has never received care and maintenance. That’s why we at the Ministry of Social Affairs who have links in heroism carry out maintenance with the local government,” Risma said in a written statement, Saturday (23/10).

Risma is known to have visited President Sukarno’s grave for two days on Saturday-Sunday, October 23-24, during her activities in Blitar, East Java. In addition to pilgrimages, he also went around inspecting the facilities around Bung Karno’s tomb complex.

In addition to Bung Karno’s grave complex, Risma also said that he would provide assistance to the region to carry out the maintenance and care of the hero’s grave.

“We will assist the region in maintaining and structuring the hero’s grave garden so it will not be too burdensome for the local government. So that the graves for the heroes are expected to be better and well-maintained,” he said.

During his visit, Risma also met with the Governor of Central Java, Ganjar Pranowo. The two cadres of the Indonesian Democratic Party of Struggle (PDIP) briefly spoke before saying goodbye.

Previously, it was reported that Risma had visited the graves of other heroes, including the Bung Hatta National Hero Cemetery at the Tanah Kusir Public Cemetery, Jakarta, and the national hero Tjut Nyak Dhien’s grave in Sumedang, West Java.