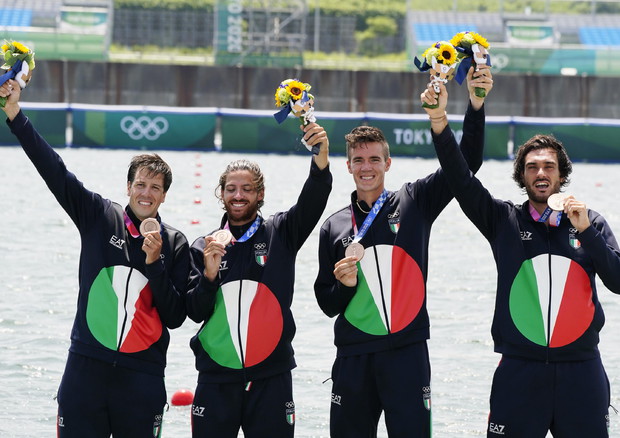 Italy wins bronze in the four without rowing at Tokyo 2020 Olympics but the final is tinged with yellow: one hour before the race Bruno Rosetti is found positive for Coronavirus and replaced. The athlete was vaccinated with two doses of Moderna. He had arrived in Japan on 12 July last. He is currently asymptomatic and is isolated in a Covid Hotel. Meanwhile, the Azzurri team finished third: the Azzurri Matteo Castaldo, Marco Di Costanzo (who took the place of Rosetti at the last moment), Matteo Lodo and Giuseppe Vicino finished with a time of 5’43 ″ 60 behind Australia , gold with 5’42 “76, and to Romania, silver with 5’43” 13.

Before the race, the blue crew received the news of Rosetti’s Covid-19 positivity, a situation that forced the technical director Francesco Cattaneo to review the formation, inserting Di Costanzo, coming from the two without, in his place. And the final was also complicated: the blue team remained behind after Australia took the lead, then in the last 500 meters they started the comeback. But in the last part of the race his lane, the 5, was invaded by Great Britain and the two teams risked ramming. So Italy had to say goodbye to silver. “They came upon us on purpose”, shouted Matteo Lodo according to what the Corriere della Sera. The blue, furious, was barely held back by his teammates. “They almost rammed us while we were going to win.” The Federation evaluates the complaint but with little chance of success. An official protest could at most lead to the disqualification of the British. “We are disappointed and happy at the same time,” said Lodo. “Everything has happened to us, never has a crew change happened so suddenly. Bruno had two vaccines, they tell us that they do everything to keep us in a protected environment and then it ends up like this. I don’t really understand how it could have happened ».