The Russian Foreign Ministry commented on the entry in the White House account, which refers to the “victory of the United States and Great Britain over Nazism,” but does not mention the contribution of the Soviet Union. The department pointed to attempts to distort history, which “do not stop even during the celebration of the 75th anniversary of the Victory over fascism.” Diplomats emphasized that the publication is contrary to the recent joint statement by Vladimir Putin and Donald Trump on the anniversary of the historic meeting of American and Soviet soldiers on the Elbe.

The Russian Ministry of Foreign Affairs has responded to a post posted May 8 on White House accounts on social networks.

The post, dedicated to the anniversary of the surrender of Nazi Germany, refers to the “victory of the United States and Great Britain over Nazism”, while the contribution of the Soviet Union is not mentioned.

“The attempts to distort the results of the defeat of Nazism and the decisive contribution of our country, which do not stop in Washington even on the solemn days of the general celebration of the 75th anniversary of the Victory, are extremely indignant,” the foreign ministry emphasized.

The Foreign Ministry noted that on the eve of Victory Day, officials in the United States did not have the courage and desire “to at least half-pay the tribute to the undeniable role and the colossal, incomparable victims that the Red Army and the Soviet people suffered in the name of all mankind.”

Russian diplomats drew attention to the fact that the relationship shown in the recording was in disagreement with the statement adopted on April 25 by Presidents Vladimir Putin and Donald Trump on the occasion of the anniversary of the historic meeting of Soviet and American soldiers in Elba in 1945, in which the emphasis was placed on the joint efforts of the two countries.

“We proceed from the fact that the real facts of history cannot be ignored, regardless of the likes or dislikes that arise both in relation to the Soviet Union, which freed the world from the brown plague in those years, and as applied to our country today,” the Russian Foreign Ministry said.

On May 8, 1945, America and Great Britain had victory over the Nazis!

“America’s spirit will always win. In the end, that’s what happens.” pic.twitter.com/umCOwRXWlB

The foreign ministry also drew attention to the fact that the record received an extensive negative response from other users of social networks. The Foreign Ministry indicated that the authors of the publication in the White House’s account delete such critical comments.

Among the comments under the recording there is often a photograph of the “Victory Banner over the Reichstag” by Yevgeny Chaldey, options for its artistic processing, as well as other images of Berlin, which was taken by Soviet troops in May 1945. Some of these publications are accompanied by ironic signatures.

“American soldiers hoist the banner on the Reichstag after they captured Berlin,” reads a comic comment by one of the users in response to a publication in the White House account.

“I don’t know if this is ignorance, arrogance, or both. This is extremely disrespectful. Whatever anyone thinks of the former Soviet Union, the fact is that it was the Soviet people who took Berlin, and that they lost more compatriots than any other country, ”says another comment. 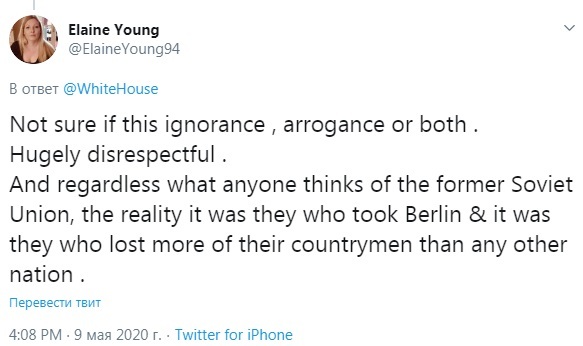 In turn, journalist Ben Norton called the publication of the White House “a complete lie.”

“Nazi Germany was defeated by the Soviet Union, not the United States and Great Britain. For most of World War II, America and Britain dealt in total with ten German divisions. The USSR alone fought with more than 200 divisions. The White House is trying to rewrite history, ”he said.

In conclusion, the Foreign Ministry called on not to turn the topic of the feat of the older generation in the war into “another problem in bilateral relations, which are already experiencing difficult times.”

“Russia and the United States, despite differences, can, based on trust, mutual respect and consideration of each other’s interests, give a joint rebuff to the growing challenges of our time,” the Foreign Ministry concluded, promising to “have a serious conversation” with American officials.

The situation was also expressed by the official representative of the Russian Foreign Ministry, Maria Zakharova. According to her, you can’t put up with such behavior.

“Call it what you want: falsification, mockery of common sense, rewriting of history. But when the authorities of such a country admit such a comment, calling themselves the leader of the free world and the defender of democracy, an implacable fighter against fakes, you cannot put up with this, ”Zakharova wrote on her Facebook page.

“Other participants will be erased from history”

Even before the publication of the White House on social networks, the Pentagon posted a presentation on its website listing the main milestones of World War II. In this document, the role of the USSR in the defeat of the Third Reich is presented mainly in a negative context. 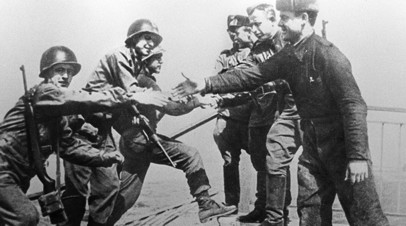 “Inadequate and narcissistic approach”: how the US is reviewing the role of the USSR in the victory over Nazi Germany

In anticipation of the celebration of the 75th anniversary of the victory over Nazi Germany, the Pentagon posted on its website a presentation in which …

In particular, according to the US defense department, the mission of the Red Army in Europe led to devastating consequences for the region. The Pentagon also believes that Moscow “occupied” the Eastern European republics.

Commenting on the publications of the American departments on the war, Vladimir Shapovalov, deputy director of the Institute of History and Politics of the Moscow State Pedagogical University, recalled the “standard sense of exclusivity for the United States.”

“It must be borne in mind that this statement is offensive not only to our people and the peoples of the former USSR, which made the main contribution to the defeat of Nazi Germany, but also to countries such as China and France, which together with Great Britain, the USA and the USSR in the creation of the UN as the leading members of the anti-Hitler coalition, and dozens of other states that at different stages of the war fought against Nazi Germany, ”the expert noted.

He suggested that in this way a modern understanding of the history of Western countries is formed.

“We already see data from sociological studies, including among schoolchildren and young people, which indicate that a significant part of the population of Europe and the USA is absolutely sure that only Americans won,” Shapovalov said.

In turn, the head of the expert council of the Strategic Development Fund, Igor Shatrov, noted that the United States serves history based on the political situation. According to him, the United States wants to write its own history of the 20th century, in which they are the winners in the Second World War.

“They expect that gradually other participants in these events will be erased from history, and history according to the US will become universal. Some little thing can have far-reaching consequences, American propaganda consists of such little things, ”the expert concluded.

Much has been said about the decision "politics" who took the administration of Donald Trump...
Read more

Hospital Manuel Elkin Patarroyo de Inírida, Guainía, was left without doctors, because some quit and others got COVID -...
Read more

Activity closes on Wednesday, September 23 on day 4 of the Copa Libertadores 2020, when the Guaraní seek to...
Read more

Ashley Tisdale She hits the web by sporting a...
Read more

Mini, standard, Pro and Pro Max, this is what the iPhone 12 models will be called according to L0vetodream

Now that we know most of the details about the next iPhone 12 Thanks to all the...
Read more

It is important to explain that cryptocurrencies are clearly an intangible and decentralized means of payment, that is, they...
Read more

Much has been said about...
Read more
World

With the participation of Macri, Rodríguez Larreta and Vidal, the Fundación Pensar subsidiary was launched in Córdoba

The new subsidiary will be commanded by the...
Read more
World

Former President Santos affirms that there are many reasons to protest

In the midst of the social mobilizations that have...
Read more

Because 60 seniors have Covid-19, healthy residents are now being transferred to...
Read more

The harsh of well-being in home – Women – Life