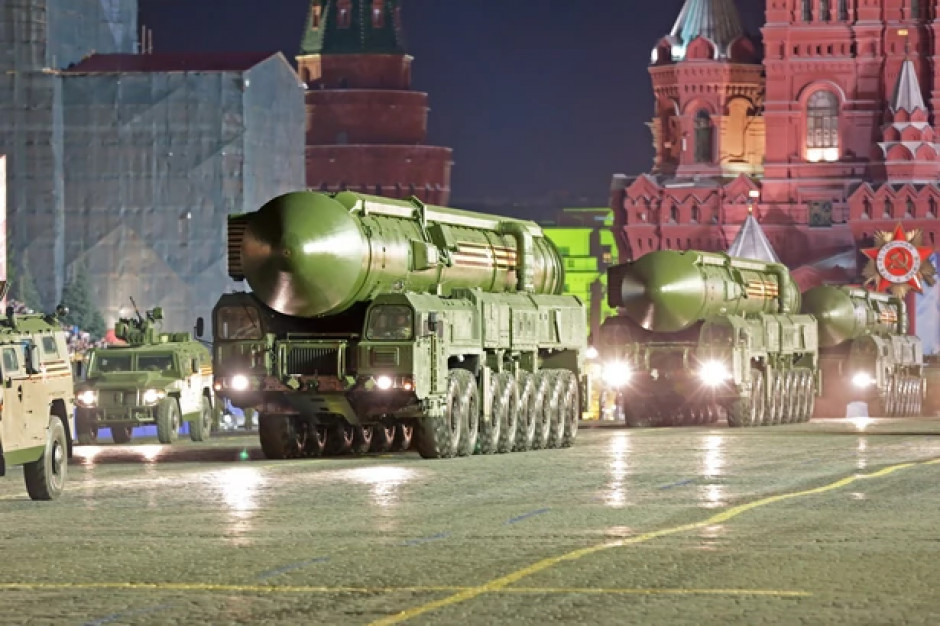 The pseudo-referenda in the areas occupied by the Russian army has ended. Their result was predictable. The West did not buy this farce, but it is focusing on the Russian nuclear threats that have been made by the way. A possible nuclear impact is now more likely.

We invite you to Katowice for the International Trade Fair of Machine Tools, Tools and Processing Technology TOOLEX. The fair under the patronage of WNP.PL will be held on October 4-6, 2022 – as part of it, we invite you to an interesting conference, New Industry 4.0. Registration is ongoing!

NATO and Western democracies are always nervous to the Russian threats to use the nuclear arsenal. Until now, however, commentators have argued that the use of weapons by the Russians is impossible. After all, there would be retaliation. Both sides would be annihilated.

However, when the Russians began to suffer humiliating failures in the war with Ukraine, and protests and chaos over the mobilization announcement began in the country, these fears increased significantly.

Russia has long been threatening the West with its nuclear potential. Recently, however, the Kremlin’s nuclear blackmail has reached a higher level. Putin scared the world with tactical nuclear weapons.

– I would like to remind (…) that our country has various means of destruction, some of which are more modern than those at the disposal of NATO. If the territorial integrity of our country is threatened, we will certainly use all means at our disposal to defend Russia and our citizens, Putin said.

Is it possible? Analysts’ conclusions are still divided, but a large number of them admit that in the current situation these threats are becoming more and more real. Does this mean that it is enough for a desperate Putin to press the red button in the suitcase with which he is not parting, and ballistic missiles with enormous venom warheads will fly into the sky?

Experts reassure that when it comes to launching strategic missiles from Russia’s nuclear arsenal, it is not that simple. Admittedly, the Russian nuclear doctrine provides for the use of nuclear weapons even in a conventional war, in the event of losing them, which would jeopardize important strategic interests of the state, but only in two cases.

The first is when Russia is attacked with nuclear weapons or other weapons of mass destruction, such as hypersonic weapons or other non-nuclear strategic weapons. The second is when the existence and survival of the Russian state is at stake. Hence, Putin is playing to include the previously occupied territories of Ukraine in Russia and thus be able to use tactical nuclear weapons as a warning.

The president of Russia cannot, however, initiate the starting procedure alone. The ballistic missile launch codes are available from the General Staff. It can only notify the staff members of the decision. It is from there that orders are sent to military districts and commands of the Armed Forces, which issue the order to launch intercontinental missiles.

There is an emergency procedure that allows the president to make such a decision, but only when the command and communication channels are hijacked or destroyed as a result of the use of nuclear weapons against Russia. First, however, someone would have to attack Russia with this weapon.

So much theory, and what does the practice look like? In the West, some pundits still believe Putin is bluffing and threatening to use nuclear weapons. Even if it considers the territories of a previously attacked state to be Russian, it has no basis in international law. But is the Kremlin abiding by conventions and international law?

How is strategic nuclear weapons different from tactical weapons, and what are their arsenals?

More optimistic is the fact that the Russian procedures for the use of ballistic missiles with nuclear warheads are so complex that the launch of such a rocket at the whim or by accident is practically impossible.

See also  Instagram: a native application for iPad should not arrive anytime soon - All the Senegalese news in real time | All the news in Senegal of the day: sport, Senegalese politics, people and various facts in Senegal

It is different with the use of tactical nuclear weapons. The decision-making process in this case is more flattened, and the use of low-powered nuclear missiles could even be decided by a desperate commander of a classical or missile artillery sub-unit, if of course he would receive such missiles. They differ from the conventional ones only in color.

Marek Menkiszak from the Center for Eastern Studies believes that Putin is still bluffing. The president of Ukraine, Volodymyr Zelensky, sees it differently, because he does not think Vladimir Putin is bluffing when he talked about the possibility of using nuclear weapons to defend Russia.

Also, General Stanisław Koziej, the former head of the National Security Bureau, believes that the risk that Russia will lose in Ukraine is using weapons of mass destruction. He emphasizes, like Menkiszak, that it is primarily tactical nuclear weapons that are at stake.

Strategic weapons are long-range intercontinental missiles that can carry nuclear warheads at a distance of 5 thousand. km and more. These missiles have warheads with great destructive force, amounting to hundreds of kilotons. The Little Boy bomb that destroyed Hiroshima had a power of about 16 kilotons.

The largest number of systems capable of carrying nuclear warheads is in the Kaliningrad, Leningrad and Murmansk Oblasts.

The Federation of American Scientist indicates that in 2022 there were 12.7 thousand people worldwide. nuclear warheads, of which almost 91 percent. (11,807 warheads) in the possession of two countries: the USA and the Russian Federation.

See also  Griselda: Sofia Vergara will be the queen of Colombian drugs - All the Senegalese news in real time | All the news in Senegal today: sport, Senegalese politics, people and miscellaneous facts in Senegal

However, these are not exact data, because information about this weapon is kept secret. In addition, there are tactical nuclear weapons, short and medium range from 500 to 5.5 thousand. km.

In the case of this weapon, the Russians are a power. It is estimated that they have from 2,000 up to 6,000 such heads. The American arsenal has 500 to 1,000 of them, including about 200 deployed in the bases of NATO countries in Europe.

It is estimated that an explosion of a ten-kiloton atomic bomb would create a 20 m deep crater, and over 50,000 people would die within 1.5 km. people. People outside of this range would be irradiated and burned.

The largest number of systems capable of carrying warheads is located in the Kaliningrad, Leningrad and Murmansk Oblasts.

As for US tactical nuclear weapons in Europe, these are practically the bombs stored in Germany, which will be made available to allies in the event of a conflict, but will have to be carried and dropped from their own planes.

Some analysts are wondering what would be the point of Russia using tactical nuclear weapons in a situation where Ukraine has as many as 15 nuclear reactors in four locations. Attacking them, even with conventional weapons, could create a radioactive hazard.

The nuclear weapons that the powers had amassed would be enough to destroy life on Earth several times. That is why both sides are so afraid of its use. They know the retaliation has been devastating.

So maybe Wolfgang Richter, a German security expert who doubts that any nuclear strike could actually happen, is right.

In his opinion, if Russia broke the nuclear taboo existing since 1945, the country would be isolated and condemned all over the world. Putin would lose all his allies with incalculable consequences for Russia’s political, economic and social survival.

Let us hope this is not an exaggeration optimism.