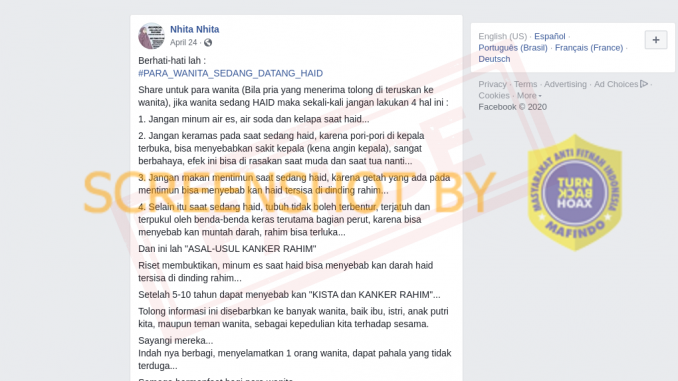 Based on the results of a search by the AFP Indonesia Fact Check Team, the claim that if women are menstruating then don’t drink ice water, soda water, coconut, don’t wash your hair, don’t eat cucumbers and should not be hit, dropped and hit by hard objects, especially the abdomen is a claim wrong.

In fact, the claim has no scientific basis. Cancer of the uterus and cysts is completely unrelated to ice water, soda water, coconut, do not wash, do not eat cucumbers and should not be hit, fell and hit by hard objects when women are menstruating.

The following is the full explanation as reported by AFP Indonesia:

“One thing has nothing to do with another,” said Anais Reyes Navarro, a gynecologist from Mexico and a member of Doctoralia, an online site for medical experts from around the world. “Eating or not eating / drinking food and drink does not change the hormone cycle and also does not affect the body against any diseases related to the female reproductive system.”

“There is no relationship between consuming coconut or drinking ice water with these diseases: both infertility and cancer,” said Kiyoshi Macotela Nakagaki, a reproductive specialist from Mexico.

“This statement has no scientific basis,” he said.

Incorrect – “Do not wash your hair during menstruation, because the pores in the head open, can cause headaches (subject to head wind), very dangerous, this effect can be felt when young and old later.”

According to Reyes Navarro, headaches during menstruation are associated with what is called pre-menstrual syndrome, which is “a set of symptoms that occur during menstruation related to variations in hormone levels.” Besides headaches, other symptoms include sensitive breasts, rapid changes in emotions and cramps.

Incorrect – “Don’t eat cucumbers while menstruating, because the sap that is in cucumbers can cause menstruation left in the uterine wall …”

“This also has nothing to do,” Reyes Navarro said, referring to the alleged effect of cucumber sap on the uterine wall.

Obstetrics and gynecology specialist at Siloam Hospital, Christofani Ekapatria, said: “I did not find the basis of science.” She added that menstruation “isn’t left [di dinding rahim] but there is thickening because the hormone progesterone does not go down because there is no ovulation. “

Inappropriate – “In addition, when menstruating, the body should not be knocked, dropped and hit by hard objects, especially the abdomen, because it can cause vomiting of blood, the uterus can hurt …”

The uterus is not in the stomach but in the pelvic chamber (under the stomach), said Macotela Nakagaki. So a punch or attack by hard objects in pregnant women must be strong enough to break bones.

Reyes Navarro said that the uterus is “surrounded by intestine, fat, muscle and skin”, so “the only way it can be affected is if he receives a deep stab, there will be a wound.”

“If you are beaten, you can vomit menstrual blood or not. There is no significance. A ruptured blood vessel in the stomach can also cause vomiting of blood, “Ekapatria said.

He also believes the same as Macotela Nakagaki that if the pelvic bone does not crack or break, the uterus remains safe.

Does drinking ice water cause cysts and cancer?

Research shows, drinking ice during menstruation can cause menstrual blood residual in the uterine wall, after 5-10 years can cause “KISTA and CANCER RAHIM,” according to claims in upload misleading.

This claim “has no scientific basis”, said Macotela Nakagaki. “There’s nothing a woman can do or stop doing to damage the uterine wall.”

The post “seems to be trying to promote disinformation, and that indispensable practices such as pap smears should not be practiced because the woman can say, ‘I don’t drink ice water anymore,’ or ‘I don’t drink cold water so I have no more risks and I no need to do a pap smear, ‘”added Macotela Nakagaki.

Endometrium is tissue that forms in the uterus every month and, when there is no pregnancy, the tissue is removed through menstruation.

“There is a belief,” he said, that in the absence of menstruation, “blood remains in the womb.” But this does not happen because the lack of bleeding can be caused by problems in endometrial development.

Meanwhile, Ekapatria said that drinking ice water “does not cause cervical cancer. Not a cyst either. “

The two Mexican gynecologists also said the term “uterine cancer” wasn’t quite right. In the area of ​​the female reproductive system, the two most common types of cancer are: endometrial cancer and cervical cancer (cervical cancer), and can occur in patients of different ages.

Although the cause of endometrial cancer is unknown, several factors including obesity, diabetes and things that affect hormone levels can affect the risk of the cancer, according to the American Cancer Society.

Macotela Nakagaki said most women with endometrial cancer were more than 40 years old and had entered menopause. Symptoms include unusual vaginal bleeding and pelvic pain.

According to the International Agency for Research on Cancer (IARC), the most common types of cancer among women in Indonesia are breast cancer, cervical cancer, ovarian cancer, colorectal cancer and thyroid cancer.

The Pan American Health Organization (PAHO) says Human Papillomavirus (HPV) is a leading cause of cervical cancer. A Pap smear is a test that women must do regularly to find out, among other things, whether they carry the virus or not.

The claim has no scientific basis. Cervical cancer and cysts are completely unrelated to shampooing, eating cucumbers, drinking ice, and impacting when women are menstruating.