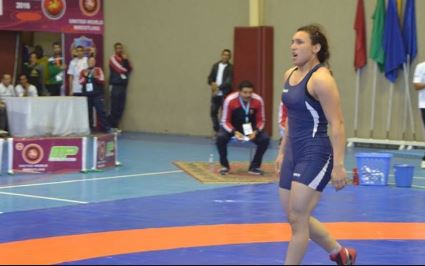 Egyptian wrestling champion Samar Hamza announced her retirement from the game after bidding farewell to the Olympic Games “Tokyo 2020”, after losing to Russian Natalia Frobyeva, in the freestyle wrestling competitions in the weight of 76 kg, by a score of 16-12.

And Samar Hamza wrote through her personal account on “Instagram”: “Let’s talk about his story. Originally in women’s wrestling, a girl constantly takes first, especially in the 76kg scale, she participated in international tournaments and achieved continuous results, the first Mediterranean Sea 2015 followed by the Grand Prize 2016 Fifth Polish Open Championship fourth Islamic Solidarity Tournament 2017 She was chosen from the continent of Africa and participated in a professional league in India, the first sea Average 2018 followed by the Mediterranean cycle 2018.

And she continued: “Until I reached a semi-final in an adult world championship and the first Egyptian girl to reach and achieve the fifth senior world position in the U-23 World Championship. Until here, it was a personal effort with the coach, we were afraid of the virtuous part. Sponsorship was held by Rawabet Company from 2019 I participated In the Giza Championship, I won bronze in the third African Games 2020 with a blank search, there is no other than Africa 2021.”

She noted: “The second world ranking championship ranked first in the qualifying tournament and qualified for the Olympics, the bronze medal in the Dunkloof Championship, the gold medal in the Grand Prix championship, the gold medal in the Sarsari Italy Championship. How old is Samar camp, from 2013 until now, 4 camps? What is the duration of the camp? Ten days.. we will see the rest of them playing with us!!!!!!!! And their age in the game, thought and spirit of the system??? As Samar Hamza, I am very proud of women’s wrestling in Egypt.”

And she concluded: “I am happy that women’s wrestling has become on the world map. I started wrestling 8 years ago. I saw the achievements of Captain Karam Jaber, and from that time I decided to be a wrestling player like him when I played 8 years ago and with limited capabilities, and I was fascinated by the thought of making an Olympic champion, and I was able to deliver To be ranked first in Africa, fifth in senior world and international and ranked championships. This is an achievement for every girl who thinks of playing wrestling in Egypt. I played wrestling by chance and dreamed of being an Olympic champion. I was confused about the culture of winning, but I failed and took advantage of every opportunity that was given to me. They encouraged women’s wrestling in order to raise a generation of young girls with new ideas, better capabilities, and a different culture. Sports is not just a medal. This is many years of struggle, hardship and fatigue. It is not the role of the people responsible for his sporting career. Thank you to everyone who stood up for me. Thank you, my great coach. Thank you, my colleague.