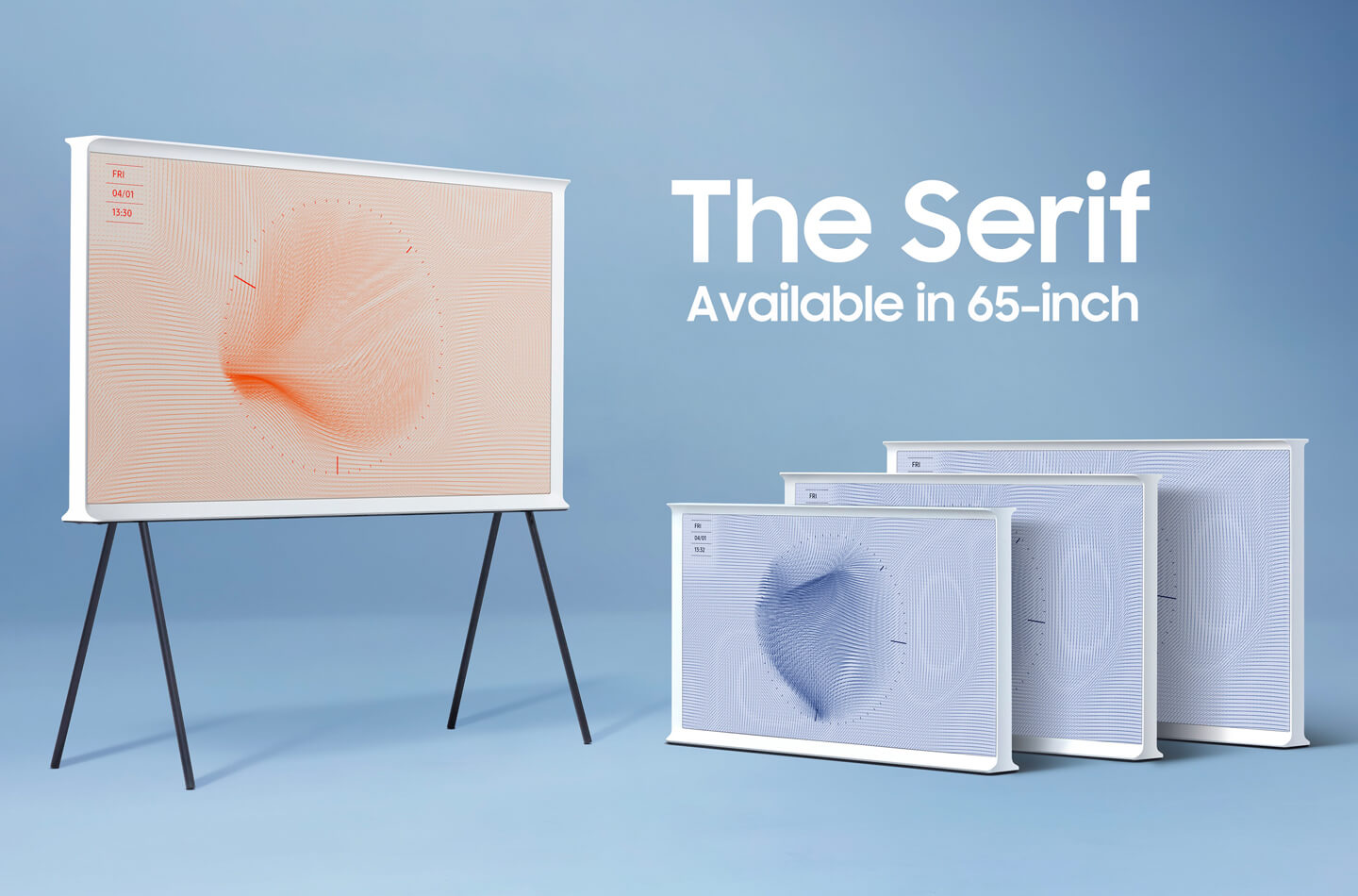 Samsung introduces two new large screen televisions in its lifestyle TV range, a 65” The Serif model and an 85” The Frame model.

Samsung annually introduces a large arsenal of televisions. Earlier this year, the South Korean manufacturer launched the first Neo QLED TV met Quantum Mini LED display presented. Also in the field of lifestyle TV’s Samsung knows how to offer a lot of diversity. Many know by now Samsung The Frame, a television that turns into a work of art the moment the television set is turned off. Samsung is now launching an extra-large 85-inch model of this model. In addition, it becomes The Serif range expanded with a 65-inch model.

A large TV, that is what many people opt for when buying a new TV these days. As a result, television manufacturers have drastically increased the screen size in recent years. This trend is also visible in lifestyle televisions. The Serif, with removable floor stand, was already available in 43”, 49” and 55” sizes. An extra large 65” model will be added in mid-August, with a choice of the colors Cloud White and Cotton Blue.

The Frame will also be made available in an even larger format. This TV was available in six different sizes; 32”, 43”, 50”, 55”, 65” and 75”. Those who would like to buy an even larger screen can opt for the new 85” model from media October. Samsung The Frame is available in the Netherlands in a range of different border colors; from traditional black to an oak wood look, walnut wood look, porcelain blue, burgundy red, clay beige or white.

The Serif is a design that focuses on form and function, inspired by the letter ‘I’ in the Serif font. It blurs the line between furniture and TV. The television was designed in 2015 in collaboration with Ronan and Erwan Bouroullec, world-renowned French furniture designers.

The aim was to design a television set that connects to the space around it and at the same time merges into the interior as an extra space. The television screen also resembles an easel. The new 65-inch screen provides an even better viewing experience.

While most TVs are designed to be mounted on a wall or stand, The Serif is built to be placed anywhere. The television is beautifully finished at the rear, so that it can also be placed in the middle of the room. Its I-shaped design allows it to be placed on any flat surface. Samsung supplies a metal stand that fits well with the TV. With the help of this floor stand, the lifestyle TV can stand on its own, you can also remove the stand if you want to place the TV elsewhere, such as a TV cabinet.

The 65-inch model of Samsung The Serif will be available in the Netherlands from mid-August for a suggested retail price of €2,000. 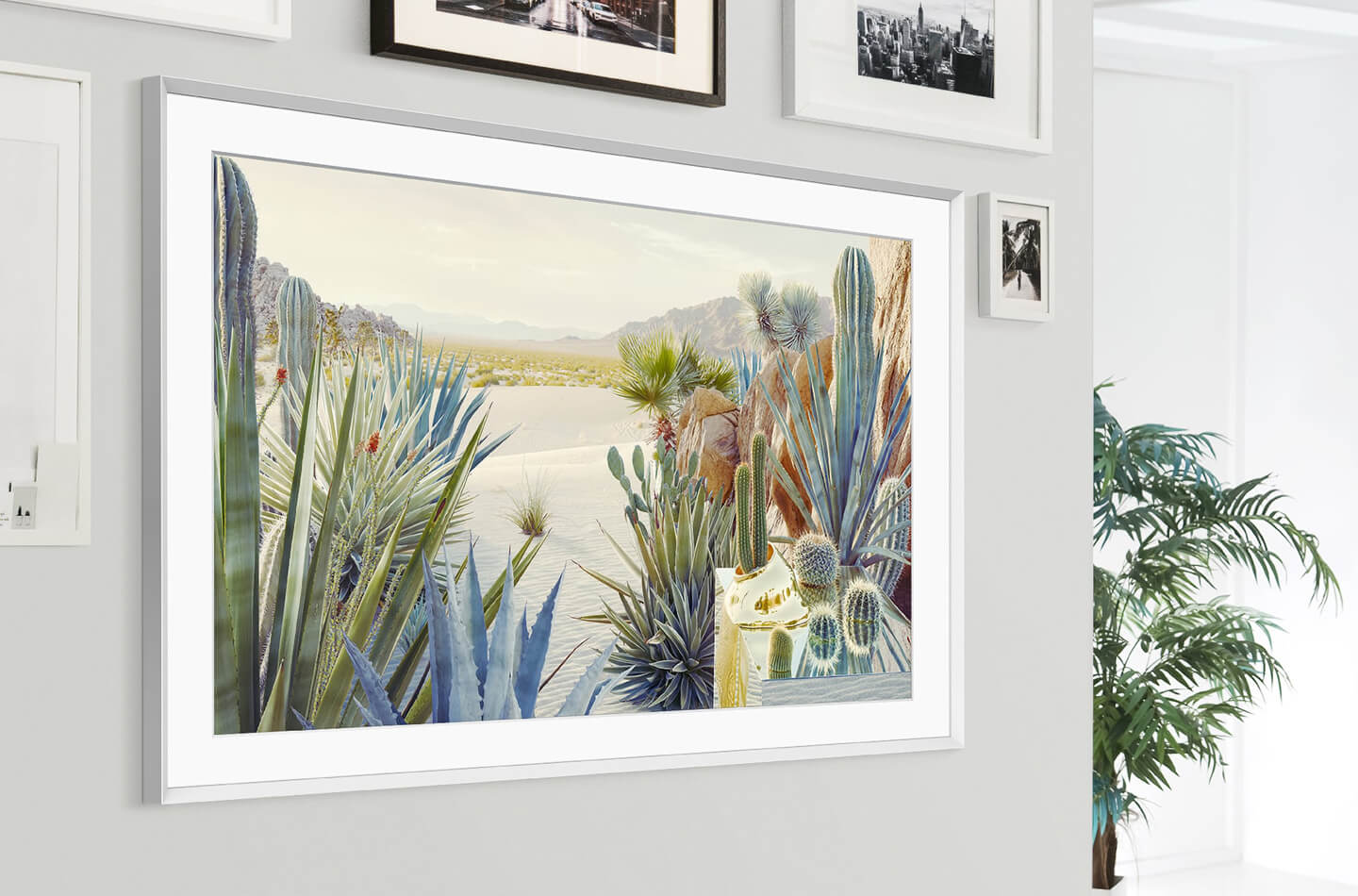 The Frame is also provided with an update in 2021. The line-up can be personalized better this year than before. The Frame is also thinner than ever, at just 25mm thick. With the included Slim Wall-Mount, you can hang the TV flat against the wall, just like a photo frame.

The television can be placed on flat surfaces with height-adjustable legs. On the Studio Stand, The Frame can be moved from room to room. The frames of The Frame are magnetic and available in different colors, so the design fits into any interior.

Users of The Frame have access to 1,500 works of art from 40 famous museums through the Art Store. The collection is still being expanded. The 85-inch model of The Frame will be available in the Netherlands from mid-October for a suggested retail price of € 4,600.

In addition to the unique designs, the new large screen TVs also offer Samsung QLED picture quality, with 100% color volume for a rich and realistic picture. In addition, consumers can enjoy a comprehensive Smart TV experience powered by Tizen OS with an extensive library and enhanced and smart features.

Via NFC technology, the new models of The Serif and The Frame support Tap View, which allows users to play content from a smartphone on the TV. This is easily done by tapping the device on the side of the TV. Users can also easily connect to a mobile device, for example via Apple AirPlay. That opens up even more ways to view content.