It could have been better because he deserved it and was close to winning it, but in the end he had to settle for equality. In a match full of intensity, River equaled against San Pablo by 2 to 2, in a match corresponding to group D of the 2020 Copa Libertadores, which meant the return to competition for Marcelo Gallardo’s team. So, both march in the second location, with four points, while Liga Universitaria de Quito leads with six units.

He started losing, he was able to recover and turn it around, but finally San Pablo tied it and with a particularity: the two goals of the paulista team were against, through Enzo Pérez (0-1) and Fabrizio Angileri (2-2 definitive). In favor, Rafael Borré and Julián Álvarez scored.

Long pass from Angileri. Borré’s pivoting head. Suárez’s filtered pass. Center behind Álvarez. Definition of Borré. In five touches, and exactly eight minutes after suffering a goal, River displayed in Morumbi in front of San Pablo all the DNA of Marcelo Gallardo’s cycle as if it were in the Monumental. The temperance, authority, courage and sacrifice of always in a moment that he never thought to live. After 190 days without football, he dominated the game to his liking and turned the score around, but finished 2-2 for those two goals against. He could have won it, but the point has a special flavor and opens up an interesting prospect for the future.

Only during the first 10 minutes it seemed that River was not going to be able to set foot in Brazil after more than six months of stand by the coronavirus pandemic. But the concerns and unknowns faded very quickly. There was no room for fear, mistrust or anxiety. Everything settled after the lucky slap of the São Paulo team: a shot from Reinaldo that was deflected by Enzo Pérez made it 1-0 after eight minutes. But the word decay appears very little in the dictionary of this team.

The coup seemed to accommodate the Millionaire’s ideas. Far from bending him, he made him stronger. Other trademark: To knock River out, several blows are needed, even if he is against the ropes and doesn’t seem to have answers. Giving him up for dead ahead of time is taking an unnecessary risk, to the point that it seemed that he was taking the victory when Álvarez scored a deserved 2-1 at 35 minutes of the complement. But, three minutes later, another unfortunate goal against (Angileri) prevented him from adding all three points. Two accidents that did not overshadow the overall performance.

Gone was the 3-3-2-2 at the beginning of the year: Gallardo raised a 4-3-3 to counteract the same scheme of San Pablo. He bet on incessant pressure at the start to drown the rival. He associated his lines with precise connections whenever he could. He advanced to the centrals to play close to the only central midfielder Enzo Pérez. And he sustained a great physical rhythm with intensity, vertiginousness, recovery and mobility. Thus, the Doll team recovered and squashed all the initial questions with the usual ideas. His soccer style is already a classic, but it does not seem to have a short-term expiration date. 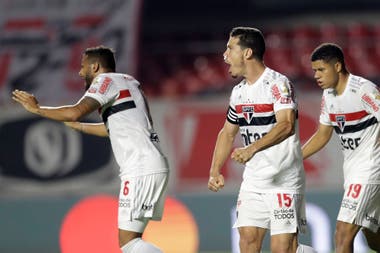 Three minutes after the 0-1, Álvarez had already demanded goalkeeper Tiago Volpi with a good shot from mid-range. Then, the play of Borré’s goal for 1-1 at 17 minutes did nothing more than confirm what was already beginning to emerge on the pitch: at no time was it noticed that River had not played since March and that San Pablo had 13 games on the road since July and he is fighting for the top positions of the Brasileirao. Another maxim of the cycle: there seems to be no terrain, rival or context that makes it smaller. He always comes out determined to do his part. Play and fight. Until the end.

Not even the injury of Lucas Pratto and the games of Juanfer Quintero and Ignacio Scocco were a limitation against a squad without much replacement in attack. On the contrary, the presence of the youthful Julián Álvarez was fundamental in the collective gear and in the result. In addition to assisting Borré at 1-0, the 20-year-old forward scored 2-1 after a great pass from Martínez Quarta on a ball that floated in the area.

There was also no lack of place for the fundamental appearances of Franco Armani, another fundamental link. In the beginning, he drowned the goal to Hernanes. In the end, he held the 2-2 with a safe save against Igor Vinicius. And although Javier Pinola was able to win it headlong in the closing, River left a very positive image on his express excursion to Brazil. He made the cut, brought out all the credentials that sustain him at the top of South American football and showed that he is still intact to fight. Even when he doesn’t play a game for more than six months.

The goals of the match