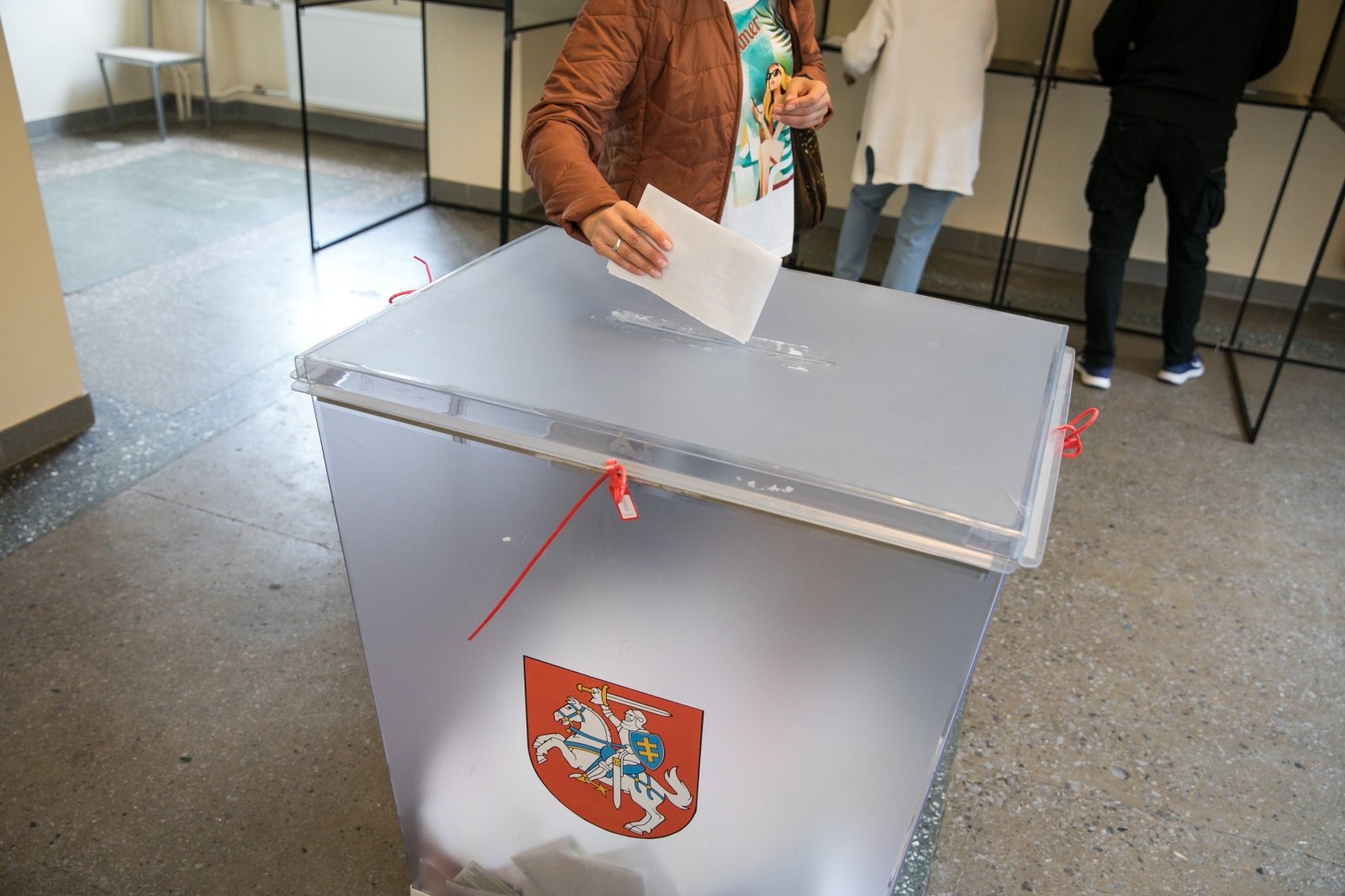 The second round will take place in two weeks, on October 24th.

The third place in the elections was taken by the representative of the Social Democrats Dainius Narkevičius with 13.98 percent. Conservative candidate Jonas Kietavičius was fourth with 12.29 percent. votes.

Less than 10 percent voted for the remaining two candidates. voters.

Slightly more than a third of all eligible voters voted in Trakai – 34.21 percent.

New elections were held in this municipality after the former mayor, the representative of the Liberal Movement Edita Rudeliene, became a member of the Seimas. She replaced Kęstutis Glaveckas, a signatory to the March 11 Act, who died in parliament at the end of April.

A special educator who has become a politician

A. Šatevičius, born in Lentvaris, obtained his higher education in 2017, having received the specialty of a special pedagogue at Šiauliai University.

He has worked as a social worker at Lentvaris Children’s Care Home, as a special pedagogue at Lentvaris Motiejus Šimelionis Gymnasium.

A. Šatevičius was employed as a youth affairs coordinator in the municipality in 2015 and spent two years in this position.

Later, he temporarily headed the pedagogical psychological service of Trakai district municipality for another two years until he was elected to the municipal council.

A. Šatevičius declares that he has more than 13 thousand. EUR 9.5 thousand of assets subject to registration and 9.5 thousand. euro.

In the questionnaire submitted to the Central Electoral Commission, the candidate indicates that he likes to actively spend his free time in nature, contact sports, and subject literature. He is married and has a son.

J. Narkevičius, born in Trakai, has already worked in a local municipality, but is more widely known as a participant in national politics.

J. Narkevičius has been elected to the Seimas since 2008, has served as the Deputy Speaker of the Parliament, and in 2019-2020 he was the Minister of Transport and Communications.

In 2020, without joining the Seimas of the current term, he was employed as an adviser to the party parliamentarian Česlav Olševskis.

J. Narkevičius started his career as a teacher, he got a job at the Šklėriiai school in Trakai district in 1983, after graduating from the Vilnius State Pedagogical Institute.

See also  Adviser to the Prime Minister: Unvaccinated people could be treated at home

Four years later, he became the principal of this school and held this position until 2001.

In 2001-2007, J. Narkevičius worked as the Head of the Education Department in Vilnius District Municipality, then for one year he was the Deputy Director of the Vilnius City Municipality Administration.

The politician was also a member of the Trakai District Municipal Council for several terms.

J. Narkevičius has almost 327 thousand. EUR 61 thousand worth of assets subject to registration. euros in cash, has borrowed for almost 37 thousand. euros.

The candidate states that he likes to play sports and spend free time in nature. He is married and has two daughters.

In the second round of Kelmė district mayoral elections – I. Petkevičius and S. Jokubauskas

In the second round of the Kelmė district mayor’s election, Ildefonsas Petkevičius, who stood up, and Stasys Jokubauskas, nominated by the Social Democrats, entered the second round.

The second round will take place in two weeks, on October 24th.

Lithuanian Green Party candidate Lina Samulytė took the third place in the elections with 12.76 percent. Dalia Viliūnienė, a representative of the Liberal Movement, with 10.81 percent. votes.

Less than 10 percent voted for the remaining three candidates. voters.

In the elections in Kelmė, slightly more than a third of all eligible voters – 34.24 percent.

Elections in this municipality were convened in June after the termination of the mandate of Mayor Vaclovas Andrulis, who was convicted for corruption.

I. Petkevičius, 63, who entered the second round and was born in the local village of Kušleikiai, is currently a member of the Kelmė District Municipal Council. He has been elected to the district council since the restoration of independence.

After graduating from the Academy of Agriculture in 1981, he worked as an engineer in the Kelmė District Agricultural Board and Stulgiai collective farm.

The politician also states that he is a member of various public, business organizations.

He declares to have more than 294 thousand. EUR 78 thousand worth of assets subject to registration. EUR worth of securities, works of art, jewelery and almost 41 thousand. euro.

In the questionnaire submitted to the Central Electoral Commission, I. Petkevičius states that he likes to travel and play sports, is married and has a son.

A school principal who turned to politics

S. Jokubauskas, 59, has been managing the Kelmė District Municipality Administration since 2019.

Six years later, in 1990, he became the principal of this school, and in 1992 he became the head of another school, Kelmė’s Kražantė Progymnasium. He worked here for 13 years.

In 2015-2019, S. Jokubauskas worked in the municipality as the head of the Education, Culture and Sports Department.

He declares to have more than 41 thousand. EUR worth of assets subject to registration, almost 5 thousand. has taken a loan of a thousand euros.

The candidate for mayor says he likes to spend time in nature, reading, traveling, driving, interested in motorcycles. He is also married and has a son.

Police: Elections in Kelmė and Trakai went smoothly, no violations were recorded

The elections in Kelmė and Trakai districts went smoothly, no violations were recorded, the police announced on Sunday.

“Today, I can say that no violations of the law related to the elections were recorded during the whole week,” Sigitas Šemis, the head of the Trakai Police, said at a press conference.

According to him, the police received only one report on election day, it was promptly checked, but the information about the violation was not confirmed.

According to S. Šemis, reinforced forces, including unformed officers, worked in Trakai district for a whole week.

“We have to state that we are aware, honest and transparent,” said the Chief of Trakai Police.

Ričardas Bracevičius, an official of the Kelmė District Police Commissariat, claimed that the police not only did not record any violations, but also did not receive any reports.

“The first such election is probably,” the official said.

Laimonas Petreikis, a representative of the White Gloves observing the elections, stated that the organization recorded about 15 minor violations in both municipalities, mostly related to the work of the election commissions.

According to him, the violations were related to the incorrect sealing of ballot boxes or violations of political agitation.

However, L. Petreikis claimed that the district commissions cooperated with the observers and took the comments into account.

“Baltosios glštinės” believes that the elections of both Kelmė and Trakai mayors went smoothly and transparently enough, “said the non-governmental organization.

The first round of elections of the mayors of Trakai and Kelmė districts took place until Sunday at 8 p.m.

The overall turnout was 34.22 percent and was similar in both municipalities.

“Voter turnout today was quite high in both municipalities,” said Jolanta Petkevičienė, Chairwoman of the Central Electoral Commission.

According to her, the votes should be counted by midnight.

New elections were held in Trakai after the former mayor, the representative of the Liberal Movement Edita Rudelienė, became a member of the Seimas. She replaced Kęstutis Glaveckas, a signatory to the March 11 Act, who died in parliament at the end of April.