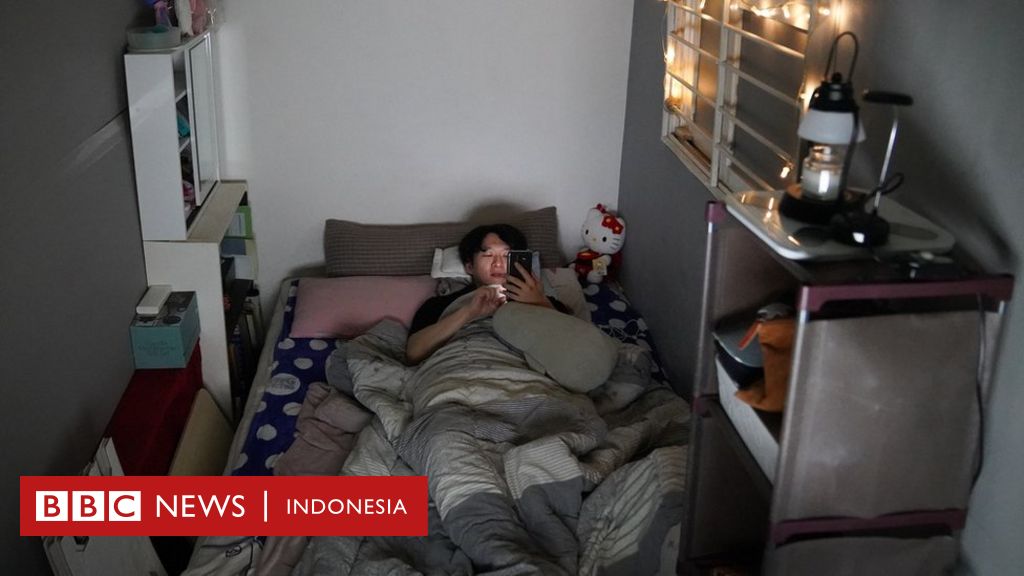 Film “Parasite“, which in 2019 and 2020 took the box office by surprise, tells the story of a poor family in South Korea who lives in a small semi-underground apartment, and a rich family who lives in a luxurious mansion in Seoul.

Although the story in the Oscar-winning film is pure fiction, that’s not the case for his apartment. They call it a banjiha and thousands of people, in the capital city of Seoul, live there.

Now, the Seoul government has announced it will abolish the semi-underground apartments, after two women and a teenager died in floods that occurred earlier this week. The cramped living quarters are usually rented by people with low incomes.

Julie Yoon from BBC Korea met some of the people living in banjiha in 2020, to find out what life was like there.

There is only a small amount of light coming in. Even his little succulents, plants that could store more water, couldn’t survive.

One could peek into his apartment through the window. Sometimes the teenagers smoked outside his apartment or spit on the ground.

In the summer, he is tormented by unbearable humidity and has to struggle with rapidly growing mold.

The tiny bathroom had no tub and was half a meter above the floor. The bathroom ceiling is very low. He had to stand with his legs spread wide to avoid hitting his head on the ceiling.

But now, he admits that he’s used to it.

“Now I know where I can get hit and where there’s light.”

Parasiteby the legendary director Bong Joon-ho, tells the story of the very different lives of the rich and the poor.

The extreme differences between the two families – the rich Park family and the poor Kim family – can be seen from their homes. One is a mansion on a hill in Seoul, while the other is a dingy semi-underground house.

In real-life Seoul, the banjiha is home to thousands of young people, while they work hard and hope for a better future.

Banjiha is not only part of Seoul’s architectural quirks, it is also a product of history. This tiny place actually takes us back to a time several decades ago, when the conflict between South and North Korea occurred.

The attack was thwarted, but tensions between the two countries grew stronger. In the same year, North Korea also attacked and seized the US Navy spy ship, the USS Pueblo.

North Korean armed agents infiltrated South Korea and at that time there were several incidents of terrorism.

Fearing an escalation, in 1970 the South Korean government changed the building construction regulations. All new low-rise apartment buildings must have a basement that can be used as a bunker in the event of a national emergency.

At first, renting out banjiha was illegal. However, during the housing crisis of the 1980s, when space in the capital was scarce, the government had to legalize the underground space for habitation.

In 2018, the United Nations noted that, despite being included in the list of the 11 countries with the largest economies in the world, South Korea had a problem with a lack of affordable housing. This is a big obstacle, especially for the younger generation and people who can’t afford it.

For people under 35 years of age, the ratio of rent to income has remained at 50% for the past few decades. That is why semi-basement apartments have become the answer amid rapidly rising housing prices.

However, some banjiha residents struggle to deal with social stigma. But not all.

“I’m totally fine with the condition of my apartment,” Oh said.

“I chose this place so I could earn and save a lot because of it. But I realized I couldn’t stop people from feeling sorry for me.

“In Korea, people think having a nice car or house is important. In my opinion, the banjiha is a symbol of poverty.

“Maybe that’s why where I live defines who I am.”

When Kim Ki-taek, trying to get rid of the smell, his daughter spoke coldly: “This is the smell of the basement. The smell will not go away, unless we leave this place.

Park Young-jun, a 26-year-old photographer, watched Parasite moments after moving into his banji apartment. Initially, the reason Park chose banjiha was because it was affordable and as long as there was space.

After watching the movie, he became constantly thinking about the smell of the basement. “I don’t want to smell like the Kim family,” he said.

In the summer, he burned he burned countless incense and continued to use the dehumidifier. In some ways, he says the film motivated him to repair his apartment and decorate it.

“I don’t want people to pity me just because I live underground,” he explained. Park and his girlfriend, Shim Min, make a vlog about their makeover of their banjiha apartment.

Park and his girlfriend, Shim Min, make a vlog about their makeover of their banjiha apartment.

They were very happy with the place, but it took months to get to that point.

“When my parents saw my apartment for the first time, they were worried. The previous tenant was a heavy smoker and my mother couldn’t get over the smell,” Park said.

Shim, a 24-year-old YouTuber, initially strongly disagreed with Park when he decided to live in the banjiha apartment.

“I once had a very negative perception of banjihas because they didn’t look safe. It reminded me of the dark side of the city. I grew up in high-rise apartment complexes my whole life, so I was worried about my boyfriend.”

Their house changing video received a positive response from the viewers. Some onlookers even envied the style of their apartment.

“We love our home and are proud of the work we’ve done here,” said Min. But, he stressed, that doesn’t mean they want to stay in the banjiha forever. “We’re going to class.”

Oh also saved up to buy my own place to live. By living in a semi-basement apartment, he hopes to realize his dream more quickly.

“My only regret is that my cat, April, can’t enjoy the sunshine through the window.”

All photos by Julie Yoon