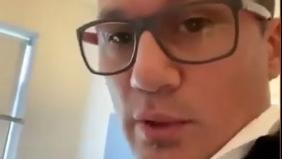 He had Covid but an Italian no vax convinced him to leave the hospital and the patient died after a few days. The case that is being discussed in Ireland concerns the 75-year-old Joe McCarron and the Sardinian activist Antonio Mureddu, a restaurateur from County Galway already known, according to the local press, for his conspiratorial and far-right activism and who had joined the groups that they oppose medical treatment and coronavirus vaccinations.

In a video posted on the internet, he is seen helping McCarron out of the Covid ward of Letterkenny University Hospital while doctors try to persuade the patient not to leave. “If you stay here they will kill you,” Mureddu says, claiming to be there to save him.

The 75-year-old was hospitalized again a few days later, this time urgently, due to the worsening of his condition. Pulmonary ventilator therapy was not enough.

For the Irish Times Mureddu, who is said to be a former soldier and supporter of the League, made the gesture with the assistance of the Common Law Information Center to which he is affiliated: the group promotes application of the law only on the basis of the consent of individuals individuals. For the activist, it was the old man himself who requested his intervention. Garda, the Irish police, has launched an investigation into the fact to determine if the code has been violated.