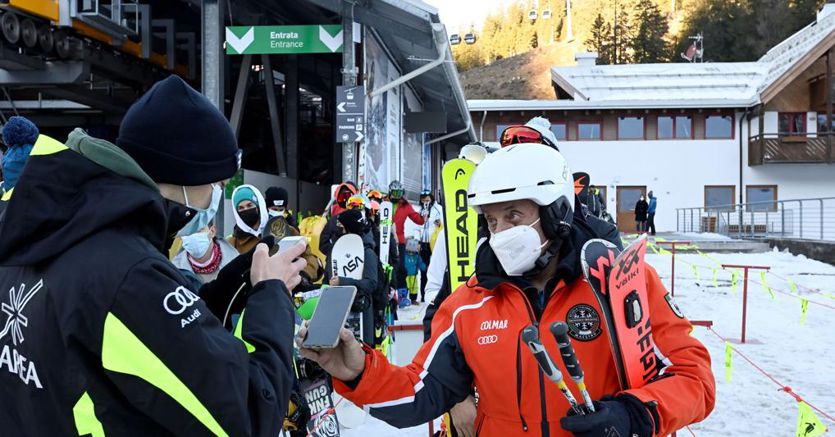 The wave of infections in Europe casts a shadow on the start of the ski season, which is now approaching, and on the Christmas holidays, put at risk by the effects of any new restrictive measures. «We are worried about the mountain, which was massacred last year: we cannot propose zero this year too, it just doesn’t seem the case. They are organizing themselves with accesses with the green pass and must be protected », warns the president of Veneto Luca Zaia. With the advancement of the infections, the rest periods on the snow of a potential audience of 3.8 million Italians who went on holiday in the mountains during the end of year holidays before the pandemic are threatened, according to a Coldiretti / Ixè analysis in reference to hypothesis of a reinforced Green pass. Before the pandemic, the mountains were the preferred destination for over 10 million Italians traveling on Christmas and New Year’s Eve, for a total cost of 4.1 billion euros, one third of which went to the table.

Impacts feared on the related industries

The feared effects do not concern only the sports facilities but the entire induced nature of the holidays in the mountains, from the activity of the mountain huts to the farmhouses, already severely affected by the limitations of Christmas and New Year last year. And according to the operators, the higher price of the resumption of infections would fatally fall on the structures engaged in accommodation, food, transport, entertainment, shopping and souvenirs due to the limitations that could be triggered in the event of a change of color from yellow to ‘ orange in the most popular regions of winter tourist destinations.

There were 35 million estimates on the departures of fellow countrymen a month ago: 10 million for the “bridge” of the Immaculate Conception, 12 for Christmas and 13 for the New Year. When there are fifteen days to the first event and a month to Christmas, of those 35 million estimated there are still 11 million missing, while the cancellations arrived on bookings made amount to 2.5 million. The data comes from the survey on the propensity of Italians to travel, conducted, between 15 and 19 November, by Confturismo-Confcommercio in collaboration with Swg. «Uncertainty prevails, not fear, and for this we need clear and immediate indications from the competent Authorities on the possible rules to be adopted in order to face the upcoming holidays in safety; especially for the vaccinated people, the most inclined and ready to leave, ”says the president of Confturismo-Confcommercio Luca Patanè.

It is the “freezer” effect of uncertainty that is reflected on a winter season that was to definitively close the crisis and instead promises to be still very uncertain. Another 8.5 million cases are added in which respondents declare that they have changed their holiday destination, choosing a closer one, or have reduced the days of vacation, which were already on average well below the corresponding figure in 2019. Resists a hard core of 35.5% – more than 12 million – made up of those who, in any case, do not change their minds for any of the planned vacation periods, and declare that they will leave anyway. However, in half of the cases, these are holidays with family members or friends, whose impact of spending on real tourist services is in any case reduced compared to the average.

First events in the name of maximum precaution

With Germany and Austria moving to important forms of lockdown in an anti-contagion key, those who have cause for concern are the North East Regions. From Friuli Venezia Giulia and Alto Adige (where the councilor for health, Thomas Widmann, said it was certain that “The situation will continue to worsen” urging the rush to the vaccine) in Trentino with infections and hospitalizations on the rise but not so much as to foreshadow imminent closures. The winter season has to be saved. The hoteliers, returning from the summer recovery, are aiming for the white circuit to continue to heal the pandemic wounds. The mayors of Levico, Trento and Rovereto invoke it and from Monday 22 November they host the Christmas markets with limited numbers, green passes and mandatory masks. Same protection measures also for the squares of Bolzano, Merano, Bressanone, Brunico and Vipiteno which will open on 25 November.