Enyaq is the first Škoda production car based on the Volkswagen Group’s modular platform for electric cars (MEB). At the same time, it is the only concern car on this platform manufactured in Europe outside Germany. The car with a length of 4.65 meters will be supplied with electric motors with power from 132 to 225 kW and rear or all-wheel drive.

“With the introduction of the Enyaq iV, Škoda Auto is entering a new era. It is the first purely electric Škoda car based on a modular platform for electric cars, “said Chairman of the Board Thomas Schäfer. 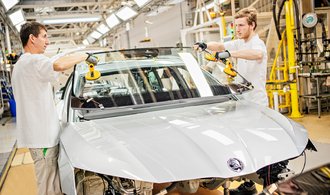 Purely battery electric cars in Europe are attracting subsidies. For example, the French can apply for up to 12,000 euros, which is close to half the price of cheaper models, the Dutch are entitled to 4,000 euros. Germany has recently increased its subsidies for the purchase of an electric car to twice 6,000 euros and will receive up to a further 3,000 euros from the manufacturer itself. In the Czech Republic, only purchases of electric cars for companies and organizations are subsidized, not for private individuals. Businesses can get up to about 40 percent of the price of a car. With electric cars in the Czech Republic, it is possible to park for free in the blue zones.