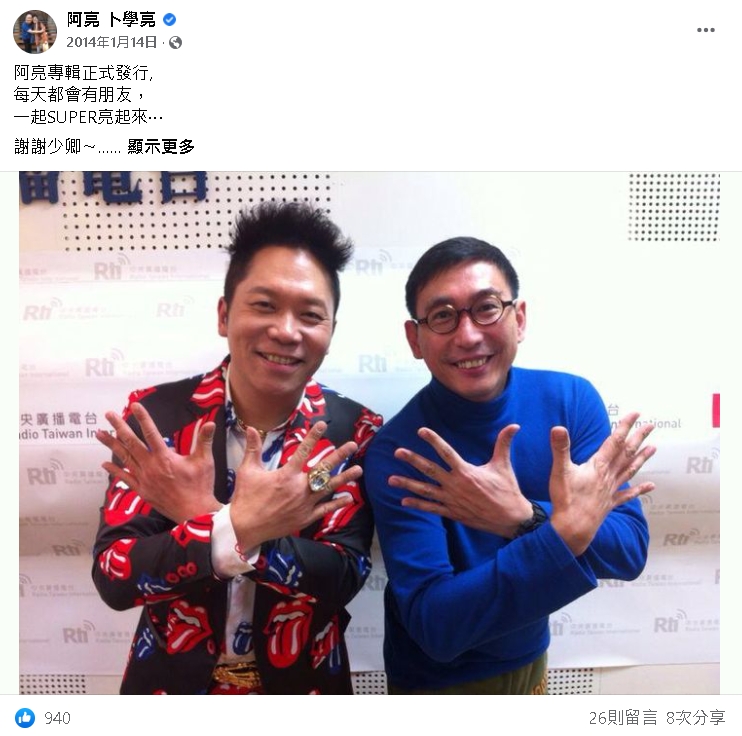 Artist Song Shaoqing accidentally crashed into a taxi while drunk driving last month. His exaggerated behavior of repeated drunk driving arrests and repeated offenders has attracted public criticism. He was only cut by Feng Yigang, his 10-year partner and head of the comic strip, and his friend Bu Xueliang Jin (14) ) in the early morning of Sunday, and suddenly responded to the photo of the two of them 8 years ago on Facebook, sighing and writing “The driver’s license is torn up ~ don’t open it again for the rest of your life!”.

Bu Xueliang uploaded a photo with Song Shaoqing on Facebook in January 2014. At that time, he was releasing the new song “Super Running Lover’s Dream”. After 8 years, he seemed to have seen the dynamic review of Facebook. He couldn’t help but post on the post The following message exclaimed, “Please grow up! Your driver’s license is torn ~ don’t open it again for the rest of your life!”, attracting more than 300 people to like it, and some fans responded “It’s really a good friend!”, “Brother Liang is really a friend! In the middle of the night Get up and write a cautionary tale.”

Song Shaoqing accidentally ran into a taxi in the early morning of December 28 last year. When the police arrived at the scene, they smelled alcohol on his body. After a drink test, it was found that his alcohol level was as high as 0.95mg/L. He was transferred for the crime of public danger. The New North District Prosecutor’s Office investigated and finally paid 30,000 yuan on bail. The four previous cases of drunk driving were also dug up one by one.

In fact, Song Shaoqing had cases of drunk driving in 2003, 2004 and 2018. In 2003, he ran into a parked vehicle and fled, and could not obtain his alcohol test value in time. However, he disappeared 30 hours before showing up to the owner’s house. The apology, the reconciliation, and the denial of drinking. In 2004, he crashed into two cars, and both cars leaked oil and smoked. He was still lying in the car and slumbering. Finally, the firefighters forcibly dragged him out of the car. At that time, the alcohol test value reached 0.81mg/L.

In addition, in 2018 and 2020, the media broke the news that Song Shaoqing said that he did not want the chauffeur to know his home address, so he only let the chauffeur drive near his house and then drive home by himself. Don’t drive, don’t drink while driving”. In addition, this time he was drunk and chasing a taxi, and it was already his “5-degree drunk driving”, which aroused public disgust.

“Minshi News Network” reminds you: Don’t drive when you drink, don’t drink when you drive!

Do not drink underage, excessive drinking is harmful to health!