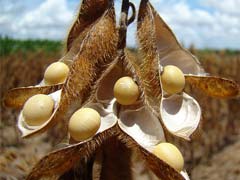 The soybean market follows its upward trajectory this Tuesday (27) on the Chicago Stock Exchange. After some lows, oilseed futures rose, around 11:50 am (Brasilia), between 13.25 and 14.50 points in the main contracts, taking August to US$14.26 and November to US$13.71 per bushel. The advance in prices continues to reflect adverse weather conditions in the US, which has already resulted in a downward correction in the indexes of crops in good or excellent conditions by the USDA (United States Department of Agriculture) in its report released at the end of afternoon of this Monday (26).

According to the bulletin, the index of soybean crops in good or excellent condition dropped from 60% to 58% during the week. A year ago it was 72%. 30% of the fields are in fair condition and 12% in bad or very bad condition, against 29% and 11% in the previous week of last week.

“The productive areas in the north and some areas in the center continue to be stressed by the high temperatures and predominantly dry weather in recent weeks, which is reflected in the classifications”, explains the general director of Grupo Labhoro, Ginaldo Sousa.

And the updated maps continue to show poorly distributed rains, which are still limited in the west of the country, and high temperatures, which could continue to harm crops if the scenario remains that way.

What still hangs in doubt about the CBOT soybean market is the news from the demand front. With tight crushing margins and also for pig farming in the country, the Asian nation has been making only occasional purchases, “from hand to mouth”, and still concentrated in South America.

“Now that Brazil has run out of soy, will China go back to buying soy from the US? The Paraná River in Argentina is at its lowest level in 77 years. The river is so low that ships cannot cross it. , which makes logistical expenses even more expensive. And this is the same window of time that China took advantage of to start aggressively buying American soybeans a year ago,” says Al Kluis, American consultant at Kluis Advisors, to Successful Farming portal.