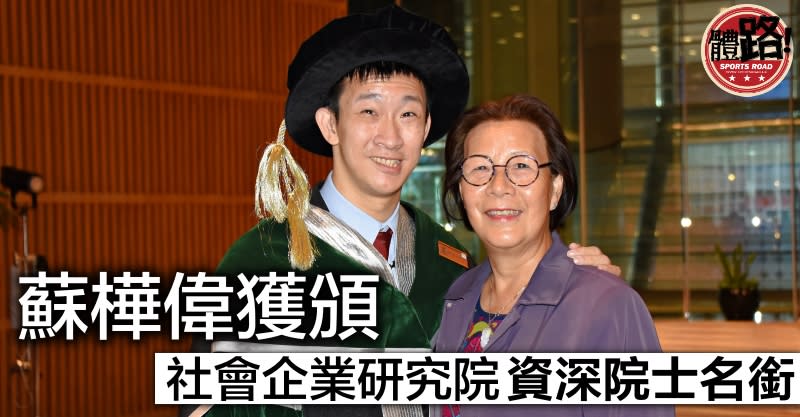 [Tilu News]Su Huawei adds another title! The six-time Paralympic Olympic track and field gold medalist attended the Honorary Qualification and Award Presentation Ceremony of the Academy of Social Enterprise today (22nd) and was awarded the title of senior academician in recognition of his contribution to society. “Wei Tsai” is pleased to see that he is recognized and supported, and hopes that through his new identity, the society will pay more attention to the disability movement.

Su Huawei won 6 gold medals in the 4 Paralympic Games from 1996 to 2008, making this former Hong Kong disabled sprinter the title of “Wonder Kid”. The Tokyo Paralympic Games will be held this year, and the live-action film “Mama’s Wonder Boy”, which records the struggle of Su Huawei and his mother “Su Ma”, is also released this year, allowing the community to have more awareness and attention on the disability movement.

“Wei Tsai”‘s contribution to the disability movement and contribution to society was affirmed by the Institute of Social Enterprise and was nominated as a senior academician for the year 2020/21. “Wei Tsai”, who attended the award ceremony with “Su Ma” today, said with a smile: “So happy, the graduation ceremony was relatively simple in the past. I didn’t have the opportunity to wear graduation gowns. This is the first time! I am so happy to get the Institute of Social Enterprise. Support and affirmation.”

“Wei Tsai”, who won the new title, also hopes to encourage the people of Hong Kong through his own experience and through the movie “Mom’s Wonder Boy”: “I am so happy that the movie is recognized in the society. I hope everyone can be inspired by the movie and learn to persevere. The spirit of not giving up. Like me, maybe I started slowly, but I can catch up later.” He pointed out that the society’s attention to the disability movement has increased compared to the past. There is more support for sports, and more people with disabilities can participate in sports at the same time.

Photo and text: He Ziyuan