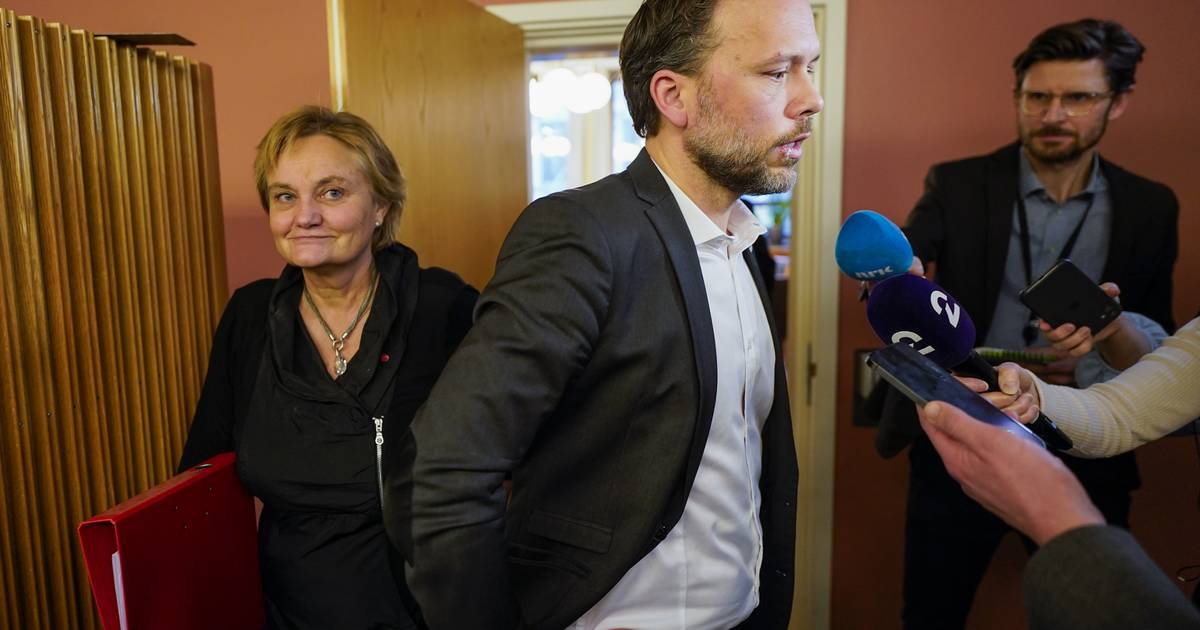 On Monday, Prime Minister Jonas Gahr Støre was actually supposed to visit Sweden. After Stefan Löfven resigned as leader of the Swedish Social Democratic Party earlier this autumn, it has been expected that his successor Magdalena Andersson would become Sweden’s first female prime minister. It should actually have happened already last week. But now everything is uncertain in Sweden, and Støre’s journey is postponed indefinitely. The reason is that the Social Democrats and SV’s Swedish sister party Vänsterpartiet do not agree on a political agreement that can ensure Andersson the necessary support in the Riksdag.

At the same time, in Oslo, the negotiations between SV and the Labor / SP government were about to stall. On Monday, Aps and Sp’s parliamentary leaders Rigmor Aasrud ​​and Marit Arnstad SV leader Audun Lysbakken called in for a meeting. The two felt it was necessary to raise the negotiations to the level of parliamentary leaders. Lysbakken did not agree, but still met. After the meeting he was in a slightly better mood. But SV is not to be misunderstood: The level of changes in the budget that the government uses as a measure, a couple of three billion, is nowhere near something SV can accept. They need a lot more.

The government parties believe that what the Liberal Party and KrF were able to move in 2013, when they reached an agreement with the Conservative / FRP government on the state budget for 2014, is a good indication of what SV can hope for. Lysbakken rejects this. After the meeting with Arnstad and Aasrud ​​on Monday, he said that there are two completely different situations. The Liberal Party and KrF had a comprehensive co-operation agreement with the government in addition to the state budget, where they had had several important breakthroughs. SV has no such thing. Then they have to get far more in the budget.

See also  The happy ending story of Matilda, the sow who escaped from a farm to give birth to her ten pigs in a wood

The parallels between Norway and Sweden are interesting for several reasons. In Stockholm, it is now expected that the Riksdag will go to the polls for a new prime minister on Wednesday without any agreement with the Left Party. Magdalena Andersson already has 174 votes against her. Only one more is missing, so she has a negative majority of 175 votes and can not become prime minister. The Center Party has agreed to abstain, in exchange for a few points. But it seems that the Left Party demands far more, especially on pensions, than the government has the opportunity to give them so that they too cast their votes. It may end up that the Left Party does not get anything, but still refrains from voting against Andersson, so that she becomes prime minister. Or it could end up with the left-wing socialists joining the right, including the far-right party the Sweden Democrats, and overthrowing the social democrats. Possibly that the Social Democrats give way at the last minute, and that the Left Party can collect a large, political gain.

Det norske SV closely monitors the Left Party in general and party leader Nooshi Dadgostar in particular. SV’s party secretary Audun Herning has stated to Swedish Radio that his party is inspired by the clear communication to the Left Party, not least that they put their feet on the ground and refuse to be taken for granted. Nooshi Dadgostar was a guest on SV’s election vigil earlier this autumn, and on top of SV, her frequent Facebook updates are read with great interest. There, Dadgostar continues to emphasize how important it is for the Left Party to make a big impact for them to be willing to give any support. There are no hints of relaxing the requirements or getting down. On the contrary, one can get the impression that the fall height is increased. On Monday afternoon, the message was clear from Dadgostar: “If we have no agreement, we will vote no.”

There is still time left for the Labor Party, the Socialist People’s Party and the Socialist People’s Party to find a solution to the budget negotiations in Norway. But if they are too steep, SV risks the governing parties giving up on getting an agreement, and rather put forward loose proposals based on how far they got in the negotiations. Then SV can vote in the alternative for the government’s proposal – or drop it. In such a situation, we are in a high game where it can all end with a government crisis already at the first crossroads for Jonas Gahr Støre.

Most likely we will not get there. But it is very difficult to understand how SV’s demands for stronger greenhouse gas cuts than what the Solberg government proposed, can be met without increases in taxes on petrol and diesel. The Center Party denies this. It is also difficult to see how there can be any agreement without raising the tax level, or possibly using more oil money.

The fact that the government chose to spend three billion on a reduced electricity tax, but did not find 1.6 billion to fulfill the Labor Party’s important promise of holiday pay for the laid off, or the money needed to remove more antisocial cuts, indicates that the Center Party has a firmer grip on the budget process than the Labor Party has had until now. Trygve Slagsvold Vedum is also now much closer to the process than Støre is. It is not unnatural, given that he is Minister of Finance, but it is still interesting to see how often he appears in the Storting.

See also  Conflict over wages and working conditions in the emergency room of Marche-en-Famenne: serial resignation of doctors

On Wednesday, we will probably find out how the game about Sweden’s prime minister ends. This may give an indication of what is happening in the Storting until the financial debate on 2 December.