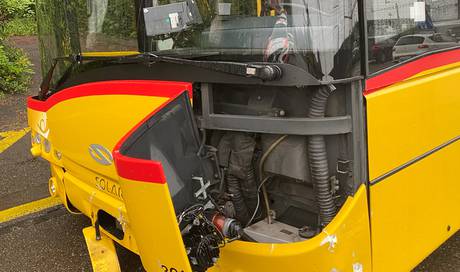 The accidents occurred on Thursday morning traffic. Shortly before 6:30 a.m., a third party reported a collision with a public bus. The regular bus continued without taking care of the damage. A short time later, a 65-year-old bus driver reported that he was at Muri station and was waiting for the police there, as the … Read more

A postbus accident occurred at Birr station on Friday morning. Shortly after seven o’clock the bus of line 364 (Brugg-Birr) crashed into a wall next to a pedestrian underpass. There were no passengers on the bus, as a Postbus media spokeswoman says. The driver had let her get out at the station beforehand and then … Read more

There was a fatal traffic accident between Oberrüti and Sins on Friday afternoon. In the out-of-town area, a truck and a Toyota collided head-on at 2:50 p.m. The driver succumbed to his serious injuries at the scene of the accident, the cantonal police wrote in a message on Saturday morning. The identity of the victim … Read more

A patrol of the Bremgarten regional police wanted to stop a driver in Bremgarten on Zugerstrasse on Saturday evening to check on him. The Aargau Cantonal Police reported in a media release on Sunday afternoon. The driver ignored the police stop sign, fled and lost control of his vehicle in Rottenschwil at the Reuss Bridge. … Read more