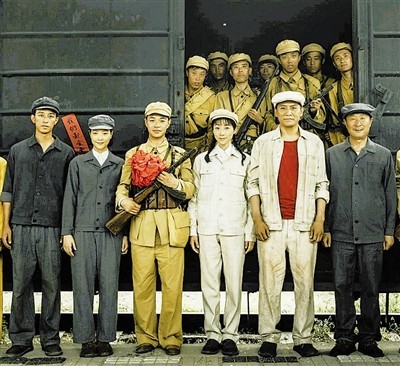 Tonight’s News (Reporter Ding Xiaochen) “Iron Will”, directed by Ning Haiqiang and starring Liu Ye, Han Xue, Zhang Guoqiang, Lin Yongjian (first from the right), etc., released the first official trailer a few days ago. The film tells the story of the early days of liberation, when the Communist Party of China united and led Ansteel employees to overcome many obstacles and resume production in the shortest possible time, producing the first batch of molten iron and smelting the first batch of steel to support the fight against U.S. aggression and aid Korea.

The director of the film, Ning Haiqiang, said: “The grand historical narrative, the reappearance of the fiery era, the symphony of contribution and sacrifice, the passionate collision of steel and sweat, are the steel will of the new republic that the film wants to present, and it is also the greatness of forging ahead in national rejuvenation today. The steel willpower that China on the journey needs.”

The deeds of the old Ansteel model workers, such as the old hero Meng Tai and “the man who walks ahead of time” Wang Chonglun, are almost household names, and they are also presented in literary and artistic works, but this is the first time they have appeared on the big screen. The actor Lin Yongjian, who plays Meng Tai, has done a lot of homework. Every day in the crew, no matter inside or outside the camera, he always speaks the authentic Tangshan dialect, which is the hometown dialect of Meng Tai who came to Northeast China from Fengrun, Hebei. In his gestures, Lin Yongjian is completely the image of an old worker who is not good at words and who is full of love for the new China. He said, “Let Meng Tai grow on himself.”

Original title: Telling about the birth of the first molten iron in New China, Lin Yongjian’s “Iron Will” as a hero