In this Nov. 7, 2019 file photo, Luis Fernando Camacho, opposition leader and president of the Pro Santa Cruz Civic Committee, attends a rally with coca leaf producers in La Paz, Bolivia. Camacho is one of eight presidential candidates running for the May 3 elections. (AP Photo / Juan Karita)

“If you show yourself to genuflect and submit to the MAS and do not fulfill your Constitutional mission of giving security to Bolivians, and do not order the lifting of the blockades and the release of the hostages, you announced that I will be forced to summon the people to reject Masist violence and caring for democracy and the lives of Bolivians ”, warned Luis Camacho in his open letter to Jeanine Añez.

“The people have the right to defend life when the negligence and complicity of the rulers abandon their responsibility,” he added.

For the leader of the Civic Committee for Santa Cruz and presidential candidate, “criminal masism continues to generate violence and deaths. There are dozens of Bolivians killed due to lack of oxygen, citizens are kidnapped and tortured at the hands of the MAS, a priest has been beaten and dragged away, ambulances do not pass and the sick die on the roads “ 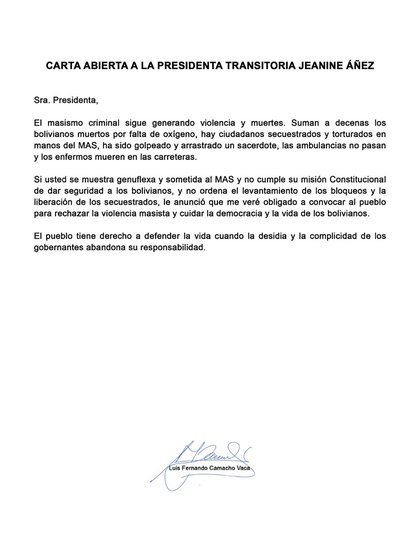 Groups related to Morales started roadblocks last Monday in rejection of the decision of the Supreme Electoral Tribunal (TSE) to postpone the elections to October 18, invoking health reasons.

Last night, in some areas of Santa Cruz (east) there were clashes between those who blocked the roads and rival groups. The government also denounced that opponents who maintain the cuts looted trucks that transported food. 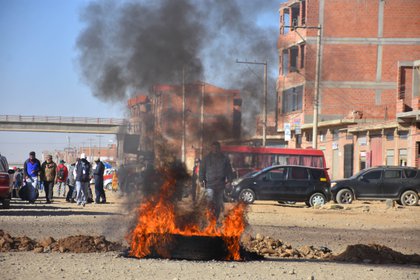 A group of people block a road during a protest due to the new postponement of the Bolivian elections, on August 3, in El Alto (Bolivia). EFE / Stringer


Faced with rising tensions, Bolivian authorities warned about the use of security forces to put an end to roadblocks.

The blockades are causing large economic losses and serious health risks, as they prevent the passage of tanks with vital medicinal oxygen to care for patients with coronavirus and other pathologies. With 11 million inhabitants, Bolivia registers almost 88,000 coronavirus infections and more than 3,500 deaths.

Last Friday, the Bolivian Foreign Minister, Karen Longaric, denounced before the Permanent Council of the OAS “violent and inhuman actions” in protest at the rescheduling of the elections, including attacks on ambulances and “dynamite attacks” and “fires” that she said they blocked the passage of essential medical supplies.

“In recent days we have to mourn the death of people due to lack of oxygen due to the blockade of roads and attacks on the transport of supplies,” said the national chief of Epidemiology of Bolivia, Virgilio Prieto. For this reason, 23 patients died in La Paz, three in Cochabamba and five in Oruro, he said, warning about a trend of “excessive expansion” of the new coronavirus in the country.

“Faced with this alarming situation, the government requests that international organizations censor these flagrant violations of human rights,” Longaric urged, during an extraordinary session of the OAS executive body requested by La Paz and held virtually.

“The demonstrations and blockades promoted by groups related to former President Morales are putting the lives of thousands of Bolivians in danger, and this cannot be consented to by the international community,” Longaric told the OAS. “Morales sows chaos,” he said about the ex-president, asylee in Argentina since December after 14 years in power (2006-2019).

After the presentation, the members of the OAS, except Argentina and Mexico, expressed their support for the interim government of Bolivia. “It is low to pretend to obtain political revenues from the suffering of the people before COVID-19. It is immoral and unworthy to play politics with life, and it is infamous that groups of miserable and petty interests violate human rights, ”said General Secretary Luis Almagro, in a virtual session.

The OAS supported the Bolivian government against the roadblocks of followers of Evo Morales: “It is immoral and unworthy”