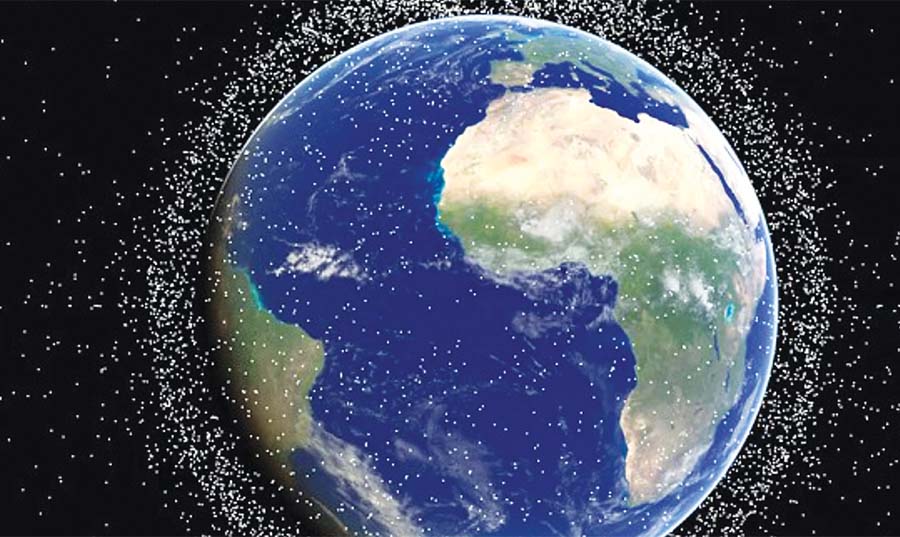 London – Al-Quds Al-Arabi: A university professor and one of the specialized space scientists issued an unprecedented warning about the space waste that has become swimming in the universe far from the globe, but it has become so huge that it may pose a danger to the planet.

A professor at the University of Utah, America, warned that among the hundreds of millions of pieces of debris floating in space, a large part of them could end up forming a “ring” around the Earth, similar to the gas giants in the solar system. In a recent interview with the Salt Lake Tribune, University of Utah researcher Jake Abbott said the debris likely gave Earth its own “rings” made of “space junk.”
However, Abbott and his team are working on a way to clean up the debris, placing a magnet attached to the end of a robotic arm and using the magnet’s eddy currents to collect space junk, the Daily Mail reports.
NASA estimates that there are at least 23,000 pieces of debris in Low Earth Orbit (LEO) larger than a softball in orbit, but there are likely to be more than 500,000 pieces between 0.4 inches and four inches.
The European Space Agency says there are likely to be 170 million pieces of space debris smaller than 0.4 inches.
More than 27,000 pieces of orbital debris are tracked by the sensors of the Department of Defense’s Global Space Monitoring Network.
Scientists say that four planets in the solar system have already rings, and they are Jupiter, Saturn, Neptune and Uranus.
According to research, Saturn’s rings are made of ice and rocks of varying size, and they could be the remains of ancient comets, asteroids or satellites, says NASA.
The rings around Jupiter and Neptune are fainter and consist mainly of dust.
It is possible that the rings of Jupiter were caused by a number of meteor strikes that struck the planet’s 79 moons, according to Britain’s Royal Greenwich Museum.
NASA explains that LEO is now viewed as the “world’s largest landfill,” adding that removing space debris is expensive due to the sheer scale of the problem, as there can be up to 6,000 tons of material in LEO.
Much space debris can reach extremely high speeds (in some cases 18,000 miles per hour or seven times the speed of a bullet) and even a small piece of orbital debris hitting a spacecraft or hitting Earth can cause major problems.
American researcher Abbott and his team are working on a way to clean more than 6,000 tons of material in low Earth orbit, most of it flying at 15,700 miles per hour.
“Most of this junk is going around,” Abbott said. Stretch out your hand to stop it with a robotic arm, it will break your arm and create more debris.”
In order to clean it up, Abbott and his team are working on a way to use magnets to clean LEO of all debris using eddy currents.
“We basically built the world’s first tractor beam,” Abbott explained. It’s just a matter of engineering now. We have to build it and launch it.”
In a study published on Nature last month, Abbott and his team noted that there should be a magnet attached to the end of a robotic arm.
As the magnets rotate, they activate eddy currents (electric currents that form like eddies) that create their own magnetic field.
Finally, using the currents’ magnetic field, space debris can be collected.
“Using dimensional analysis, combined with multi-physics numerical simulation and experimental validation, we characterize the forces and torques generated on a conducting sphere in a rotating dipole magnetic field,” the authors wrote in the study abstract.
Other groups are also easing the burden caused by the huge amounts of debris, which is mostly made up of satellites and spacecraft.
The Space Startup Privateer said it is trying to track space junk in orbit and predict how it will work and where it will travel, to make space safer for all countries, according to the Daily Mail.
“The idea is to make the space more transparent, and make it more predictable, by knowing where space junk is located over the next few minutes and hours,” said the company’s chief scientific advisor, Mauriba Gah.
“We will be able to predict how two things from two different governments will act before there is cause for concern,” he added.
Earlier this month, Russia blew up one of its satellites and the resulting debris nearly hit the International Space Station.
Some analysts have said that the space debris left by the explosion will wreak havoc on spacecraft for years and possibly decades to come.
The satellite was orbiting about 300 miles from Earth’s surface at the time, creating a debris field between 270 miles and 320 miles from the surface.
The International Space Station orbits about 260 miles from the Earth’s surface, although at the time of the accident, it was just under 250 miles from the surface, meaning debris only passed over it about 20 miles when crossing its orbits.
The astronauts aboard the International Space Station were ordered to take refuge in safe places inside the escape rooms on the ship, while none of the seven astronauts who were aboard the International Space Station were harmed.