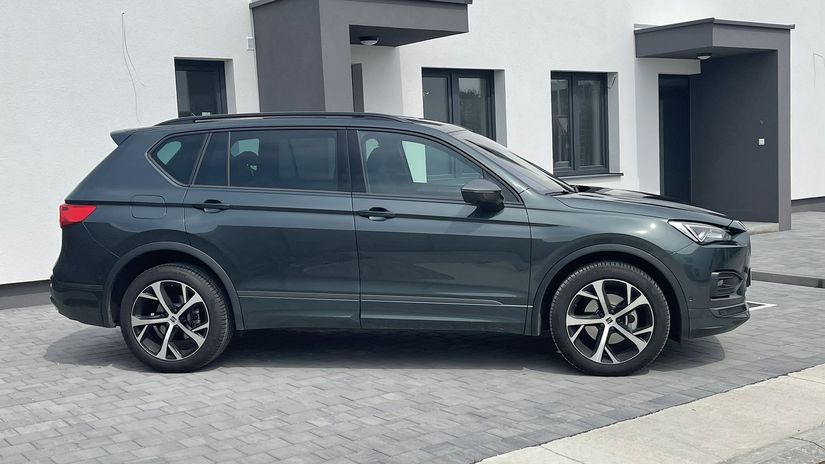 SEAT Tarraco FR 2,0 TDI (2022) In the FR equipment, the front mask and both bumpers have been changed, it has more pronounced wheel rims and there is also a rear spoiler.

SEAT Tarraco is really a decent “piece of car” – at least in terms of dimensions. It is 4.74 meters long, 1.84 meters wide and with a wheelbase of 2.79 meters it can boast of a really generous space in the cabin – even on the back seats. And a huge trunk with a volume of 760 liters. However, it drops to “only” 700 if you have the 7-seater version, and if you use all seven seats, it shrinks to 230 liters.

However, we had the standard 5-seater version and under the hood the weaker of the offered two-liter diesels with an output of 110 kW, or 150 horses. The advantage of this engine is that it has really low consumption, the disadvantage is that it cannot be combined with a 4×4 drive. A large SUV with front axle drive, low consumption and a large trunk is a candidate for a practical family car, especially if it has a relatively decent price.

SEAT Tarraco FR 2,0 TDI (2022) The interior looks simple and elegant, it has exemplary ergonomics. We had to get used to the touch control of the air conditioning for a while.

The Tarraco currently starts with a 1.5 TSI gasoline engine with a power of 110 kW and a manual 6-speed gearbox at a price of 31,240 euros, and the two-liter diesel we tested with the same power and a 7-speed automatic dual-clutch transmission DSG starts at 36,800 euros.

Just for interest – a price comparison with its biggest competitor, which in our region is the Škoda Kodiaq with almost identical dimensions, built on the same platform. The modernized Kodiaq in the same basic version as the Tarraco starts at a price of 30,000 euros, and “our” two-liter with DSG costs 35,640, so the Škoda comes out a little cheaper.

If we look at sales, the comparison here is complicated. Škoda tried to secure as many Kodiaq units as possible in Slovakia, which as an SUV has a relatively higher price and, of course, a margin. In our region, SEAT enjoyed less support from the group and came to Slovakia in minimal numbers, and even now things do not look ideal with its deliveries. In the first 8 months, 945 units of the Kodiaq were sold, but only 135 units of the Tarraca. If the Slovak importer had enough cars, the numbers would be completely different. And with Tarrac, it’s really a shame.

From our, obviously subjective, point of view, the prices are very similar, but we like the Tarraco more, it would probably be our first choice in a direct comparison of both models.

The four-wheel drive is missing

But with one fundamental difference. As we wrote above, we drove with front-wheel drive, because the tested 110 kW diesel two-liter is not offered with 4×4 drive. However, the Kodiaq does, in this combination it costs 39,800 euros. The absence of a quad bike with a tested engine is one of the two important handicaps of the Tarrac. The second is that we found the Kodiaq a bit more comfortable.

However, SEAT is considered a sportier brand than Škoda, so the chassis is tuned as well. Driving over larger bumps in it will sometimes feel more than you like. But again, it’s not extreme, the Tarraco definitely won’t try to shake your soul when driving over bumps and potholes, it just doesn’t go through them as smoothly as some competing models.

On the other hand, if you step on the gas pedal a little more outside the city, the Tarraco will be a little more confident in more dynamic driving. Every pro simply has its cons. Driving comfort can be significantly increased with an adaptive chassis, available for approximately 850 euros. We would recommend at least considering this additional element with Tarrac.

And speaking of the equipment, it is really strong, because we tested the FR version, which is the highest of the three offered equipment levels. It is pleasant that in terms of safety, you already have the same powerful equipment as in the FR version we tested, including emergency braking, monitoring of the situation in front of the car, an assistant for driving control in the selected lane, full LED lights and a light and rain sensor.

See also  Lab Test Results, The Death of Sparrow Colonies in Bali Due to Natural Phenomena

The FR equipment, which the tested car in the photos also had, has, for example, a modified front mask and both bumpers, extended fender edges, a rear spoiler, rear-view mirrors in a specific gray color and the lower part of the doors painted in the body color. The cabin has sports seats with integrated armrests. The green color that the tested one had is an extra charge, it’s called Dark Camouflage and we mention it because it really gives the car a special look.

The strength of this model is economy. If you are looking for a large and really spacious SUV and you do not need a 4×4 drive, then we can really recommend the 150-horsepower two-liter. We drove almost 1,000 kilometers with it (per tank), while the average consumption after the test was just below the 6-liter mark. We drove approximately half of the kilometers on the highway, mostly just below the permitted speed limit, a quarter in the city and a quarter in the districts.

Cooperation with the dual-clutch DSG transmission is good for a family car, the transmission shifts smoothly, but due to consumption, it tries to keep the revolutions relatively low in the standard driving mode, so sometimes the engine takes a while to react more significantly to the gas pedal. But the dynamics are good, the car accelerates very decently even at lower revs. In addition, you have various driving modes available, including sports.

It is sometimes worth trying, because the Tarraco even with front-wheel drive drives famously, thanks to the stiffer chassis, which is especially felt by the passengers in the back, it has excellent directional stability, and behaves neutrally and predictably in corners even during sharper driving. The ride in it is refined and the cabin is very well soundproofed.

From our point of view, the Tarraco’s strengths are its attractive design, large interior space and an economical engine that has sufficient dynamics. And we mustn’t forget about the relatively strong basic equipment.

SEAT Tarraco FR 2,0 TDI (2022) At the back, there are fashionable connected lights. In the FR equipment, the Tarraco also has a rear spoiler.

The shortcomings of the tested version include the absence of the option to choose a 4×4 drive. It is necessary to consider where you are driving. If you go skiing several times in the winter and have, for example, a cabin with more complicated access, it is definitely worth it, we absolutely did not miss it during normal driving. The tested car had surprisingly good traction even without it. What we would probably consider earlier is the already mentioned adaptive chassis, which will significantly increase travel comfort, especially during longer journeys.

We believe that in the case of this model, SEAT will manage to solve the logistical problems as soon as possible and bring it to the Slovak market in sufficient quantity. It is a really interesting alternative to the dominant Kodiaq, from our point of view it certainly brings a more attractive design, and if you look at the price list and compare the equipment and equipment packages in more detail, this car is a really capable rival to the model from Mladá Boleslav.

*_includes the weight of the vehicle with fuel tanks filled to at least 90% of their volume (fuel, water, etc.), the driver (75 kg) and any additional equipment