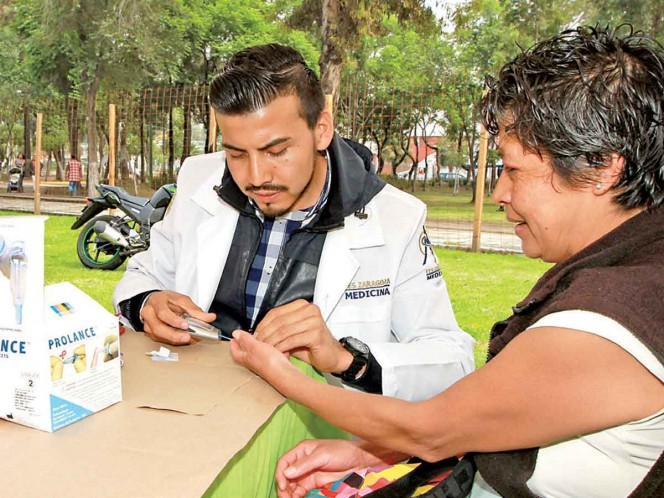 The test to detect diabetes fell from 23.7% to 15.3 percent, despite being one of the main causes of death in Mexico. Photo: Notimex / Archive

The tests to detect early three of the evils that kill the most Mexicans plummeted in the last six years.

Fewer women and men underwent a medical study to diagnose early cancer, diabetes and high blood pressure, as well as overweight and obesity.

According to the National Health and Nutrition Survey (Ensanut 2018-2019), released last week, only three out of 10 women aged 20 years or more (28.9%) went to a medical service to have a Pap test for the cervical cancer detection, unlike the almost five out of ten women (44.3%) who reported having undergone such an examination in the 2012 Ensanut.

It is, in fact, the lowest level of testing reported since 2000, when 29.4% of women went to a medical service for a Pap smear.

The cervico-uterine is the second most frequent cancer among Mexican women. Every year between 7,000 and 8,000 new cases and 4,000 deaths are diagnosed.

According to Ensanut 2018-2019, other tests that suffered a drop were those related to the timely detection of breast cancer.

In the case of clinical breast examination, the survey indicates that 21.5% of women aged 20 years or older reported having performed such an examination, while, in 2012, 36.31% of women said they had done it.

Breast cancer is the leading cause of death from malignant tumors among women aged 25 years and older. Annually around 7 thousand Mexican women die from this cause.

In both breast and cervical-uterine cancer, timely detection is key to saving the lives of patients, since both neoplasms are considered curable, as long as they are diagnosed in time.

The detection of diabetes mellitus, one of the main causes of death in the country, also fell, going from 23.7% to 15.3 percent.

For the detection of overweight and obesity, conditions that trigger other conditions, only 8.4% of Mexicans over 20 years of age attended in 2018, while in 2012 the reported figure was 20.7 percent.

Copyright law strictly prohibits copying all or part of Excelsior materials without first obtaining written permission and without including the link to the original text.