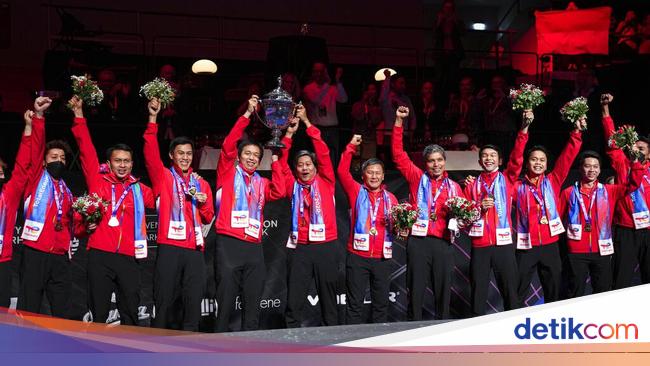 Indonesia is successful in becoming the champion Thomas Cup 2020. The supremacy trophy was even more proud because it was won after almost two or two decades of failure to win it.

The badminton team led by Hendra Setiawan won Thomas Cup by beating China 3-0 in the final.

For this golden record, PT Bank Negara Indonesia (Persero) Tbk (BNI) is the official sponsor Indonesian Badminton Association (PBSI) has even given his appreciation by handing over a coaching fund of IDR 5 billion.

So what about the appreciation from the government?

When confirmed, Mohammad Ahsan admitted that there had been no discussions regarding the awarding of the award.

“There has been no talk,” said Ahsan about the government having promised bonuses to the champions Thomas Cup 2021.

Including when President Joko Widodo visited the Indonesia Badminton Festival tournament series in Bali on Thursday (2/12/2021) and expressed his appreciation for the success of the Thomas Cup team.

“Nothing has been said yet,” he asserted.

Confirming this, Menpora Zainudin Amali said that there was no suggestion from his side regarding the award.

According to the rules, bonuses are only given to medal winners in multi-events such as the SEA Games, ASEAN Paragames, Asian Games, Asian Para Games, to the Olympics and Paralympics.

“For the single event, there is no (bonus). But if there is a single event that is considered important, prestigious, etc., I will ask for direction from the President. But for the Thomas and Uber Cups, nothing promises,” said Menpora when confirmed by detikSport, Friday (12/3/2021).

“Yesterday when I was in Bali, I stopped by to meet the General Chairperson of PBSI, but the Thomas Cup children did not meet. Because I was reviewing the progress there. As long as I sat with the Chairman of PBSI (Agung Firman Sampurna), Mr. Alex Tirta, no one was there. talk about it (a bonus),” he revealed.

“But later I will ask, yesterday Mr. President was there (Bali) and even met with the team (Thomas Cup) I will ask first who accompanied Mr. President, was there a talk (bonus) or not? But for sure our rule is multi-event ( who received appreciation). But if Thomas and Uber are considered a single event that is prestigious and becomes our pride, I will ask the President for directions first, “he said.

The Minister of Youth and Sports from Gorontalo also emphasized that since Indonesia won the Thomas Cup there has been no direct direction from the President regarding the bonus. In fact, it is usually his party who proposes it like during the Olympics and Paralympics.

“In fact, my plan is that the Thomas Cup team will be received at the Palace. (Even so) I will try, hopefully there will be appreciation from the government. I will try to do that,” said the Menpora.

“But I will ask first. For me, because this is state money, the management must be neat. I must be accountable. I don’t want to be random,” he said.