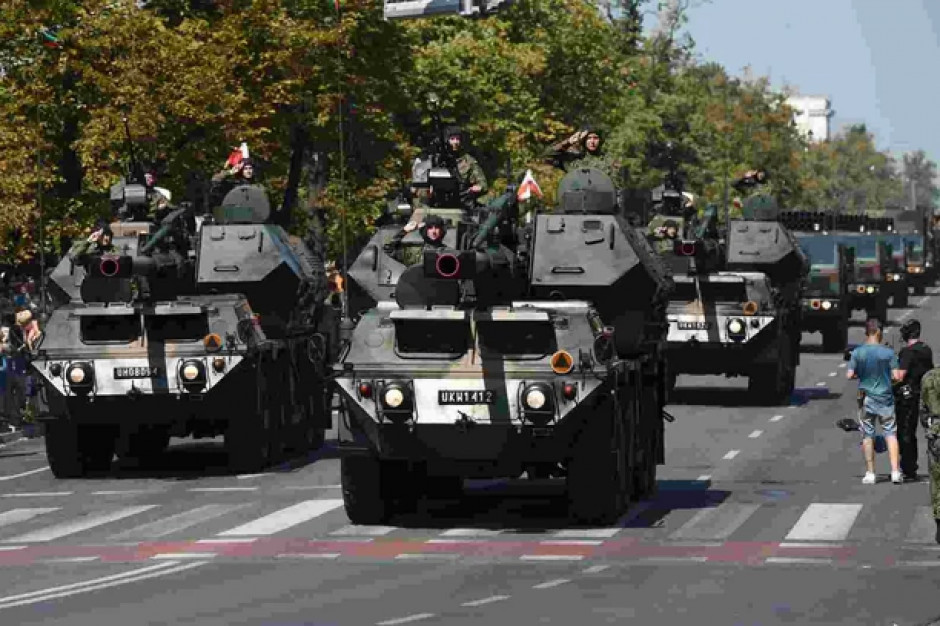 This year there will be no great parade on the occasion of the Polish Army Day celebrated on August 15 and commemorating the victorious Battle of Warsaw in 1920. The Ministry of National Defense decided that the time of war just beyond our borders is not conducive to organizing parades. However, the celebrations will last as long as 3 days. There will be a lot going on …

This year, instead of a parade, during which the army would have practically nothing new to show it, military picnics will take place in 48 places. In addition to military pea soup, there will also be recruitment points for the army …

By the way, those who dream of a uniform will be able to join voluntary basic military service. The army, which is expected to double in the coming years, urgently needs them.

In fact, this year’s Polish Army Day could as well be held under the slogan of the largest plans to build armed forces in history and the largest – so far – purchases of weapons (for astronomical money).

Jarosław Kaczyński, who was still the deputy prime minister for security (he was replaced in this position by the head of the Ministry of National Defense, Mariusz Błaszczak), announced that we should have the strongest land forces among all European NATO member states.

The army is more numerous and better armed

The army is to have at least 300,000. soldiers, have the strongest artillery in Europe and at the same time be a tank power. We are to have 6-7 quadruple divisions under arms, 500 HIMARS rocket launchers, a large number of Krabs, Korean tanks, planes, reconnaissance and combat drones and circulating ammunition …

After these plans are implemented, there will be more tanks than today Germany, France and Great Britain have together. There is also no army in Europe with 650 modern self-propelled howitzers. For example, Germany has less than 120 guns at its disposal. France cannon-howitzer Cesar – about 70 pieces.

See also  "I went back to Afghanistan, I saw little girls carrying beams on their heads ..."

We have recently concluded wholesale and billions worth of armaments contracts, approved by Mariusz Błaszczak, and have promoted us to a leader in global arms purchases. Although the scale of the equipment that we want to obtain (not to mention the horrendous money for their purchase) is shocking, it fits in with this optimistic vision of the Polish army in the near future.

Only the last Korean contracts under the framework agreement for the purchase of tanks, self-propelled guns and training and combat aircraft, which the Koreans themselves have already hailed as the greatest export success of their defense industry, are valued at at least PLN 90 billion.

We will pay over PLN 47 billion for the contracts concluded in the first half of 2022 (without the Korean package). The largest of them was a contract for PLN 24.5 billion for 250 Abrams tanks in the latest version. We also bought 32 AW-149 helicopters, which will be manufactured in Poland by PZL Świdnik (the owner of these plants is Italian Leonardo).

When it comes to contracts for the highest money abroad, the purchases of the Ministry of National Defense in the Polish defense industry are considered to be a further item. The contract concluded with Mesko plants for 3.5 thousand. Piorun anti-aircraft missiles and 600 launchers were valued at PLN 3.5 billion. Let us emphasize: these are systems that work great in Ukraine.

Even lower is the contract for several hundred unmanned search and strike systems, i.e. long-range kamikaze drones, purchased by the military from the WB Group as part of the Gladius program – for almost PLN 3 billion.

What the military will get in the near future

What are the most important weapons for Polish soldiers in the near future? Will the Polish army have sufficient strength, will it be so numerous and strong that its very existence will scare the aggressor away?

This year, our army will receive 28 tanks of the older SEPv2 variant – for training purposes.

In addition, there will be 180 K2 tanks purchased in South Korea, which will be delivered between 2022 and 2025. The second, more numerous batch of these tanks, 820 vehicles in the K2PL standard, will start (deliveries) in 2026. From that year they are to be produced in Poland.

The Polish Navy will receive 4 AW101 helicopters, purchased in 2019 – along with a training and logistics package and medical equipment. These machines are retrofitted. They should go to seafarers this year as planned, but the pandemic has postponed the deadline by a year.

The army will also receive 32 AW149 helicopters acquired this year from PZL Świdnik for PLN 8.25 billion. Deliveries of the first machines – in a year, the remaining ones until 2029.

This year, the first of the 24 sets of Bayraktar TB2 drones, purchased in 2021 from Turkey for PLN 1 billion, are also to be delivered to Poland, which wreak havoc on Russian tanks and armored vehicles.

Sky Saber systems with CAMM anti-aircraft missiles, produced by MBDA UK for the Narew short-range anti-aircraft system, are capable of striking air targets at a distance of up to 25 km. The contract for their deliveries was signed in April 2022. The deliveries will be made this and next year.

Gladius drones, ordered from the Polish company of the WB Group, use F-5 Łoś unmanned reconnaissance aircraft and circulating ammunition. Out of several hundred ordered, the first copies are to be in the army this year.

MQ-9 Reaper drones – we do not know how many we purchased. This American MALE class drone can carry out combat missions, operating in the air for up to 27 hours without interruption – at an altitude of over 1.5 km. Its range is 726 km and it can accelerate to a maximum speed of 217 km / h.

M142 HIMARS rocket launchers: we bought one squadron – 18 launchers plus two training ones for $ 414 million. with delivery later this year. Another 500 (80 batteries) are declared, but the Americans do not have that many HIMARS … Lockheed Martin reports that it is able to produce 72 systems per year. Apparently, the fact that the American weapons have to be waited for a long time, directed Poland towards Korea … July 2021. This largest order in history for the domestic defense industry was valued at PLN 8 billion. We will be building here with the British concern Babcock International – on the foundation of the Arrowhead 140 frigate.

Patriot anti-aircraft sets: the first sets of two batteries (16 launchers) purchased in April 2018 in the first phase of the Wisła program for 4.75 billion dollars. we are going to get it later this year. We also contracted another 6 batteries – in the second phase of Wisła.

There is also an order for 120 Krabs, the delivery of which will be completed by the end of 2026 – the remaining 42 cannons are to be handed over. This year, a contract is also to be signed for another 48 Krab systems. In the future, however, a decision will be made on the serial production of Borsuk, if after the trials there are no significant additional comments from the military.

This year, deliveries of 48 Korean FA-50 training and combat aircraft (the price of one machine approx. PLN 85 million) will begin. We requested the same amount of K9 howitzers – with deliveries this and next year – and deliveries of the remaining 624 K9PL howitzers will start in 2026.

It is good that after years of stagnation, suspending programs, abandoning the Technical Modernization Plan and purchasing equipment in small pools, the Ministry of Defense changed its purchasing policy after the outbreak of the war in Ukraine.

Big purchases for the Polish army are needed, because its needs are also huge. It is important that they are reasonable and not taken with a pre-election parade in mind.

However, if we manage to overcome the risks associated with these purchases and at least the first stage of the purchasing plans proves successful, the Polish army will simply be immeasurably stronger than today.