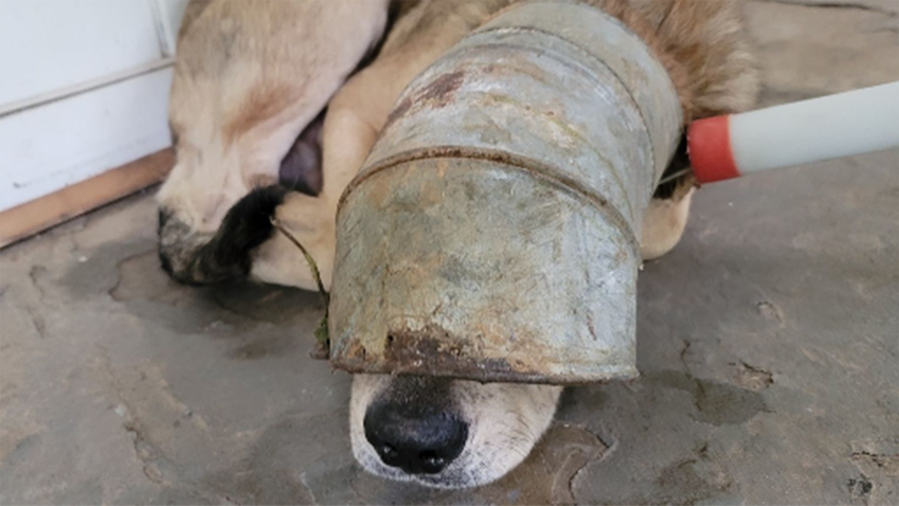 With a metal tube stuck in the head, as if it were a helmet. It is not known exactly how, but the most likely hypothesis is that it was not an accident if Cletus found himself in this anything but funny situation.

According to his rescuers, it was a cruel person who put him in there. So, out of sadism. Perhaps without knowing that he could die. Cletus was stuck in there for weeks, so much so that the skin was baked and torn, and the wounds became infected.

“The world hasn’t been kind to Cletus. At just one year old, he knew nothing but fear and despair – they write from Coco’s House Senior Sanctuary and Rescue in Terry, Mississippi, the center that has been taking care of him since he was hitched on the street. He is not afraid, he is not nervous, nothing that we would expect from a wild or stray dog. He is kind and not once has he shown aggression despite the situation ».

Cletus has infected wounds on his neck, head, ears and eyes. “It’s impossible to imagine why anyone did something so cruel to this one-year-old puppy. The pain he suffered for weeks must have been unbearable. ‘

Worst of all, “a whole neighborhood saw this poor puppy wandering around in this situation and deliberately chose to ignore him. Now he deserves people who cheer for him, to get back to having a happy and pain-free life ».

His wounds are cleaned and treated twice a day. He has to take medications that are helping him fight off infections, but veterinarians say he will be able to heal even though he will probably wear the scars of this horror forever.