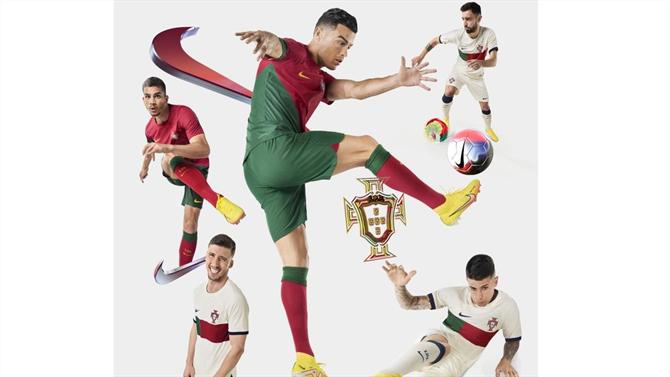 The Portuguese Football Federation (FPF) revealed, this Thursday, the new equipment of the National Team, which will already be used in the double round of the League of Nations against the Czech Republic and Spain.

According to the FPF, «the main equipment of the Equipe das Quinas, with a contrast between deep and vivid tones of red and green, refers to the national flag, which represents the country and the Portuguese people. The presence of the diagonal line that crosses the chest and the back wants to portray a Portuguese flag that surrounds the athletes’ bodies, an idea that served as the basis for the new concept “Veste a Bandeira” and which will mark the communication of the National Teams. The green shorts, much appreciated by fans, are again present, allowing the visual fluidity of this new collection. Another symbolic detail is the presence of the armillary sphere on the back collar».

The new alternative kit, “uses an off-white tone that stands out from the traditional white kits, featuring a strip with the same green and red tones of the main kit that extends to the back, keeping the same logic of the flag on the chest of the Portuguese athletes».

See also  Formula One news: Former Formula One manager: Hamilton is on his way to retire!