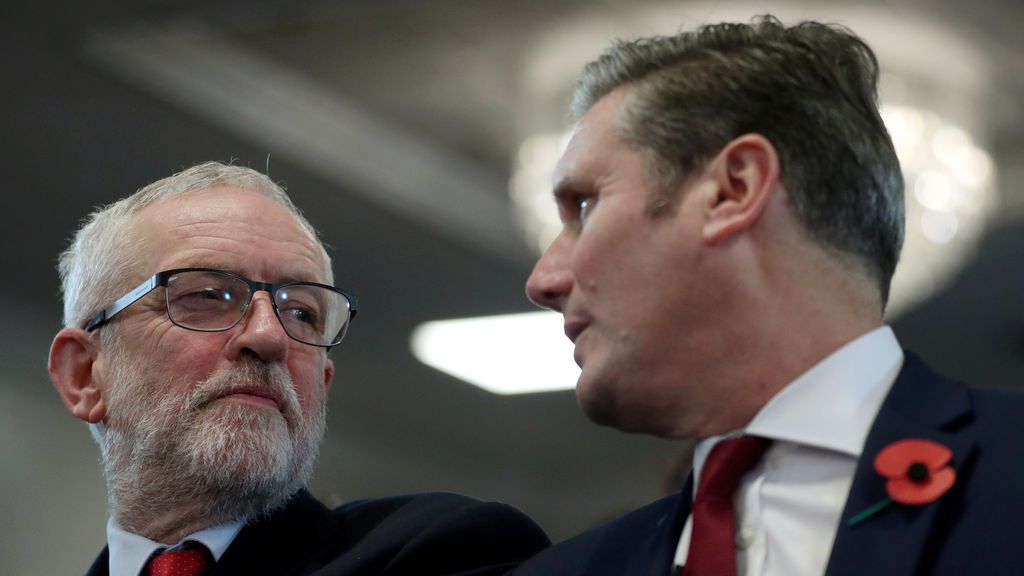 While the Prime Minister, Boris Johnson, tries unsuccessfully to reset the timer to start a new era, the main opposition party is engaged in a complicated battle: the one from the left wing of the party, representing Jeremy Corbyn, and one from the center, the current leader, Keir Starmer.

The allegations of anti-Semitism they keep the formation mired in a crisis that has worsened after this week Starmer decided to keep his former boss punished, refusing to reinstate him in the parliamentary group, to satisfy a part of the Jewish community.

What is really going on in the Labor Party? How did you get to this extraordinary situation? To understand it, you have to go back a few years and it is not enough to read the generalist press, but also specialized publications and social networks to understand the feelings of its members, including the unions and the different groups of Jews affiliated with the party.

The mandate of activist Corbyn

Jeremy Corbyn, 71, came by surprise to the leadership of the formation in 2015. His landing triggered a wave of affiliations and the party became the Western European political formation with the most members: 552,835. Some say that, thanks to him, they recovered “the illusion.” His message against austerity caught on and connected with activists who liked “his closeness” and the fact that he spoke “like a human being.”

He not only got the support of the young people but also of those who had left the party jaded by the behavior of Tony Blair (1997-2007) and his New Labor, but, especially embarrassed by the Iraq war, that Parliament had approved based on the lies of the then leader. Corbyn was precisely one of those who rebelled and voted against the decision of his party to intervene in that country.

Throughout his tenure, this leader with the heart of an activist had to constantly confront the moderate wing of his party, who made various unsuccessful maneuvers to get rid of him. He even forced new primaries in which he was re-elected again by an even greater margin. And is that a part of the formation was convinced that it would be impossible to win a general election while he was still in charge.

Corbyn’s farewell came precisely after the December elections of last year. This one could not with a Boris Johnson who exhibited his successful campaign slogan Get Brexit Done. He also received a great blow: electoral districts of the north of England, which had been traditionally Labor, ended up in the hands tories, in good part because of that promise of the conservatives to implement the country’s exit from the European Union.

During his tenure, one of the problems he faced was allegations of anti-Semitism within the party. An investigation was opened, more than 600 complaints were received On the part of its members, 96 affiliates were suspended and 12 expelled. former mayor of London Ken Livingstone, He had already left the party, after a disciplinary file was opened for some controversial statements.

Corbyn claimed he took the allegations seriously, but his detractors were not enough; they kept asking for his head. One of the people who was tougher is now former deputy Luciana Berger, who reported being intimidated, receiving threats on social networks and even appeared at a party congress with a police escort. He ended up resigning and creating, along with six other Labor MPs critical of Corbyn, the party Change UK, which lasted only 8 months.

Israel and the Palestinian people

A few years earlier, in 2016, a parliamentary committee concluded that “It is not anti-Semitic to criticize the Government of Israel”. However, some have used some Labor criticism of Benjamin Netanyahu’s regime to attack the party. A documentary from the television network al Jazeera denounced actions in this sense of the Israeli Embassy in London to discredit British politicians who defended the rights of the Palestinians, such as Corbyn.

‘The Lobby,’ aired in 2017, used hidden camera footage to expose a group of party members called ‘Labour Friends of Israel’, which promotes relations between both countries. This organization denounced the program, but the British regulator Ofcom agreed with the channel. This report also led to the expulsion from the UK of an Israeli diplomat that appeared in that documentary, Shai Masot.

Keir Starmer is leader since April, but not a stranger. He was responsible for Brexit in Jeremy Corbyn’s parliamentary group. This 58-year-old human rights lawyer was promoted during Labor Prime Minister Tony Blair to Director of the Prosecutor’s Office (2008-2015). Since 2015 he has been an MP for the Holborn and St Pancras district of London, the city where he was born.

When Boris Johnson declared confinement on March 23, his party had an advantage over Labor by more than 20 points. However, in November Starmer was hot on his heels and even during the summer some polls revealed that voters saw him as a better Prime Minister than the current one.

But nevertheless, Since its arrival to the management, the training has lost more than 56,000 members And this week the union that represents the country’s bakers has threatened to disengage from the party. The most left wing has always been suspicious of this politician who has the title of “sir”, granted by Queen Elizabeth II for his services to the Crown, although he prefers to be called simply Keir.

In May of last year, when Corbyn was still leading the lineup, the Commission for Equality and Human Rights launched an independent investigation. Your report, published a few days ago, concluded that during the Corbyn mandate there had been “acts of harassment and discrimination” and that “Not enough was done to prevent anti-Semitism”.

Starmer He responded by saying it was “an embarrassing day for the Labor Party.” He asked the Jewish community for forgiveness and promised to implement the recommendations, a “culture change” and “zero tolerance” towards anti-Semitism. What was not expected is that Jeremy Corbyn reacted to this report, but it considered it unfair and defended itself by saying that “The magnitude of the problem had been exaggerated for political reasons by our opponents inside and outside the party and by the media ”.

The one that was number 2 of the formation during the Corbyn era, Tom Watson, often very critical of him, assures that “he should have been more contrite and accept the conclusion, even if he did not agree with the magnitude of the problem.”

His words led to the party suspended him from membership and removed him from the parliamentary group. This week (only nine days later) the National Executive of the training decided to reinstate Corbyn, after hearing a rectification from the former Labor leader. However, Starmer, to the surprise of many, has decided to stay out of the group in the House of Commons for three months, which means that he will continue as an independent MP. Corbyn has been an MP for the London Borough of Islington North since 1983.

His followers have launched a request via Change.org to claim that he can serve again as a Labor MP. They denounce that Starmer is acting as a “dictator” and debate on whether to present motions against him or create a new political formation. Meanwhile, Corbyn has already turned the matter over to his attorney and the scuffle could spark a legal battle.

Jews for and against Corbyn

The organization Jewish Labour Movement, who leads the former Labor leader’s most recognized enemy, MP Margaret Hodge, has condemned the decision to return Corbyn’s membership card. But nevertheless, Jewish Voice for Labour defends it. This is the same entity that in July of last year published the document ‘The fifty times that Jeremy has been on the side of the Jewish people’.

Another of its defenders is Andrew Feinstein, a party member and former deputy from South Africa during the mandate of Nelson Mandela. “There is no evidence to say that it is anti-Semitic,” says this Jew who now lives in the UK and was the first MP in that country to introduce a motion on the Holocaust. His mother lost 39 members of her family in the Auschwitz concentration camp and gives talks on genocide prevention.

The Labor Activist Owen Jones he believes that “those who have to be expelled from the party are the anti-Semites. But I don’t think Corbyn is. Starmer was part of Jeremy’s team. If you campaigned for him to be an anti-Semitic prime minister in the last election and served in his shadow cabinet, that would be a moral disgrace. If that was the case, I would have resigned.

From doors to outside, the party seemed to be reviving with its new leader. In the Prime Minister’s control sessions in the House of Commons, Starmer, as if it were a trial, has managed to put Boris Johnson in check with his prosecutorial techniques. Y his strategy, in which he has combined criticism but also constructive opposition, has been widely applauded.

Inside, the party faces a deep crisis. Starmer had promised unify training and regain the trust of the Jewish community. However, prioritizing the second at the expense of the first could, according to analysts, generate a “civil war”.

Despite the decline in militants, the Labor Party still has some 495,000 members. It is the largest political formation in the United Kingdom, far ahead of Conservatives, who have 180,000. But since Gordon Brown lost the 2010 election to David Cameron, there has been no Labor Prime Minister in Downing Street.

Does Keir Starmer have a chance to do it? Boris Johnson is currently ruling with an absolute majority and the next elections are scheduled for May 2024. That date seems distant and there are many challenges ahead, such as overcoming the pandemic and the economic crisis that it has unleashed. In the short term, the current leader faces the challenge of regain the confidence of the most left wing of the formation and, in the long term, position yourself as a leader who appeals to voters who are not traditionally Labor. Meanwhile, the battle for the party’s soul continues. And it is not clear that Starmer will be the winner and, therefore, the one who leads the formation when the British return to the polls.