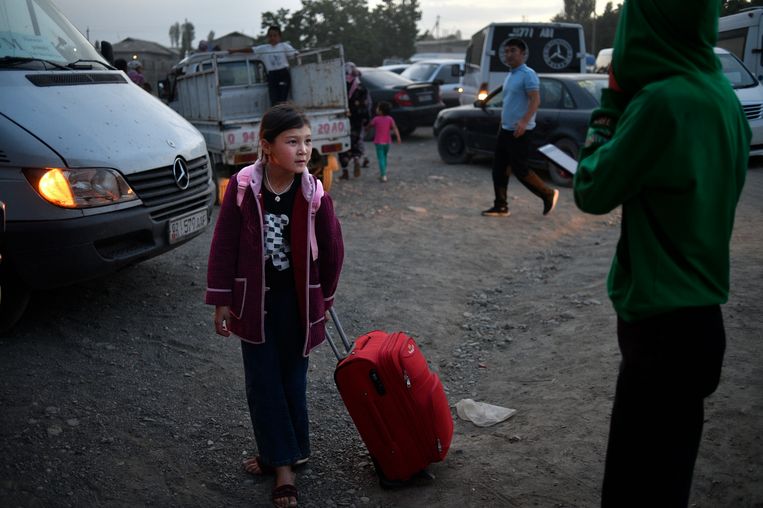 Kyrgyzstan and Tajikistan have been disagreeing over their common border for over thirty years. Only half of the thousand kilometer long border is clearly demarcated. The two countries have regular quarrels about the other half, but it has never turned into violence with so many victims as now.

More than 100,000 Kyrgyz have fled the violence. Kyrgyz President Japarov declared Monday a national day of mourning. He called for calm among men eager to go to the border area to fight. “We have courageous fighters and enough soldiers to repel the violators of our borders,” Japarov said.

Tajikistan accuses Kyrgyzstan of igniting the conflict. For example, Kyrgyzstan arrested many ethnic Tajiks, the Tajik Ministry of Foreign Affairs said on Monday.

The border conflict is a time bomb that the Soviet Union has planted in Central Asia. Moscow redrawed the borders of Soviet republics several times without taking into account the ethnicity of the inhabitants of the territories. That did not cause any great tensions at the time, because people could easily cross the border during socialism.

But after the dissolution of the Soviet Union, the soft borders suddenly became hard national borders. Livestock farmers could no longer access pastures where they and their families had worked for years as employees of collective farms. Farmers lost their access to water sources. Meanwhile, population growth put them under pressure to produce more food.

Tajik peasants, in particular, are at a loss because, according to the most recent Soviet borders, they are cut off from virtually all pastures in the border area. Tajikistan demands that the border be drawn on the basis of old Soviet maps. Kyrgyzstan sticks to maps from the 1950s.

Tensions led to the ‘Apricot War’ in 2004, in which angry Kyrgyz people pulled up apricot trees planted on disputed land by Tajik farmers. In another riot, in 2014, the two sides attacked each other with garden tools and stones. Last year saw the first serious firefights after a conflict over water. More than 50 people were killed in shelling from automatic rifles and mortar shells.

The artillery fighting of the past few days has brought a war closer. The leaders of both countries are only talking about a peaceful solution in international diplomacy. They screen their own people with populist promises to ‘secure’ the disputed areas, resulting in an arms race. Kyrgyz President Sadyr Japarov, for example, opened a drone base for border troops last week with Turkish Bayraktar TB2s in its arsenal. The armed drones played a decisive role in the war between Azerbaijan and Armenia in 2020 and are also deployed by Ukraine in defense against Russia. Tajik President Emomalii Rachmon, who has been in power since 1992, in turn opened a factory with Iranian combat drones.

Russia as a mediator

Kyrgyzstan and Tajikistan are not the only countries in Central Asia to have inherited a border conflict from the Soviet Union. Uzbekistan recently managed to peacefully dismantle such time bombs. Uzbek President Mirzijoyev, the successor to a nationalist dictator, signed agreements with Tajikistan and Kyrgyzstan after taking office in 2016 to end old border conflicts. Maps have been redrawn, mutual trade has increased.

The Kyrgyz and Tajiks are not that far yet. Since the Soviet Union, the role of mediator in their conflict has been played by Russia, which has good ties with both countries. But President Putin’s call for peace is less impressive after his own choice of violence and his defeats in Ukraine. A ceasefire announced Friday did not last. Putin called Rachmon and Japarov on Sunday to reach a ceasefire. No heavy fighting was reported on Monday.

Russian media blame the West for the unrest in what Moscow sees as its backyard. Regnum news agency says the West is fueling violence in Central Asia now that Russia has its hands full with the war in Ukraine. “It was foolish to expect our geopolitical adversaries to watch quietly.”

See also  A Russian MP threatened the American attaché. Then he crashed his motorcycle