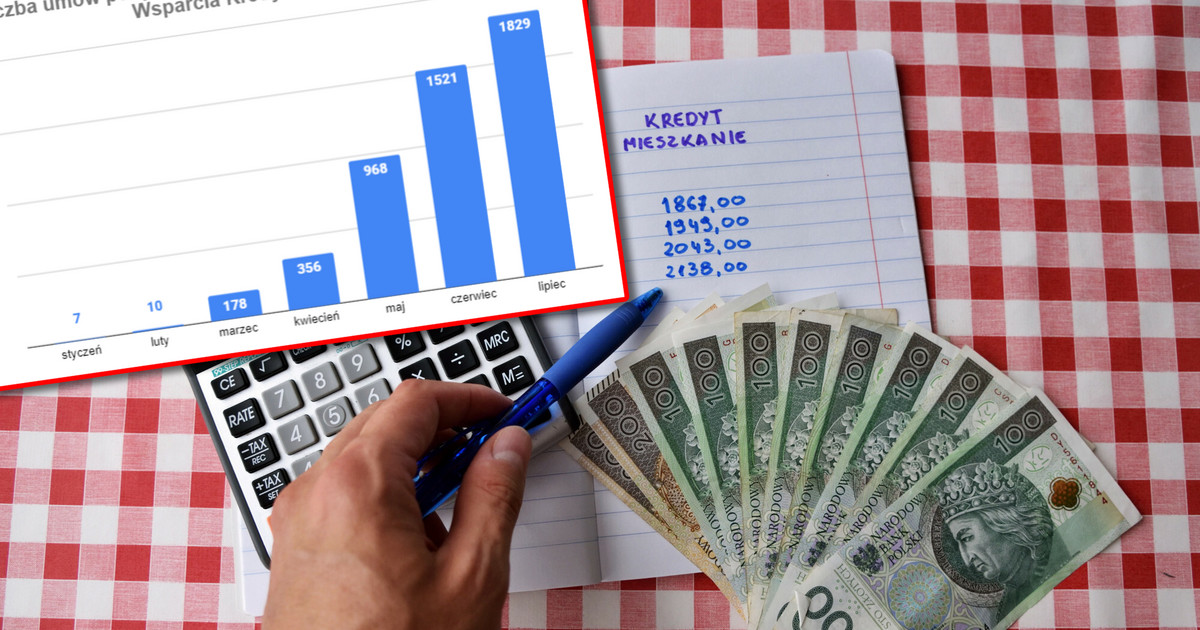 Credit holidays turned out to be a great hit at Polish banks. For only two days, customers have filed over 500 thousand applications for relief from installments, as announced on Tuesday by Prime Minister Mateusz Morawiecki.

However, the program announced by the government is an element that is intended to complement the already existing tool, i.e. the Borrowers Support Fund. At the beginning of the year, it amounted to PLN 600 million, but recently, interest in him has started to growbecause the installments of some housing borrowers are now twice as high as in the summer of 2021.

Banks are to pay an additional PLN 1.4 billion to this fund by the end of the year, and another PLN 2 billion next year. All this to meet the growing interest in the Fund.

However, only those who are in an extremely difficult financial situation can count on the money from the CEF. What does it mean? We explain later in the text what are the criteria for using this aid.

Quadruple increase in the number of contracts

The Borrowers Support Fund operates at Bank Gospodarstwa Krajowego. It is this institution that also collects data on the number of signed loan subsidy agreements.

At the beginning of the year, hardly anyone heard about the FWK. The statistics show it. In January, BGK signed only seven (!) Contracts with Poles. Their total amount is only 316 thousand. PLN, i.e. an average of 45 thousand. PLN per person.

February is just 10 consecutive contracts, and March has already 178 approved applications for support. The number of seriously troubled borrowers was then starting to increase.

Even in spring, the Fund was not very popular. In April, BGK signed only 356 contracts for a total amount of PLN 21 million 140 thousand. zloty. The average is therefore less than 60 thousand. PLN of support for one contract.

Since then, however, the interest has intensified. As reported by Business Insider Polska BGK, the number of contracts grew rapidly in the following months. In May, there were already 968 contracts for the amount of nearly PLN 60 million.

June and July are absolute records. In June, BGK signed 1,521 contracts for over PLN 95 million, and in July there are 1,829 contracts and over PLN 117 million of support. So almost five times thatwhat three months earlier and as much as 26 thousand percent more than in January. Here, however, we emphasize the drastically low base.

The interest in the Fund is also visible in banks. “At the end of 2021 we had several contracts, and at the end of June already 350. We had over 600 applications for support from this fund, so the number of contracts is likely to increase, “Santander Bank Polska representatives said during a recent press conference.

They see an increase in the number of applicants in Alior, especially in May and June. “Due to the credit holidays, we expect this interest to decline,” we hear from the bank.

Also mBank announced that it is observing an increase in interest in the Borrower Support Fund. In the first half of the year, it had about 200 customer requests in this matter, compared to single requests in the previous year.

Who can apply for help from the Borrowers Support Fund?

Support is intended for private individuals. The application should be submitted directly to the bank that granted the housing loan. To apply, you must meet at least one of the following three conditions:

– monthly income after deducting the loan installment does not exceed PLN 1,000 PLN 552 for a one-person household and 1 thous. PLN 200 per person in a multi-person household

See also: The state will pay even 72 thousand. PLN to your loan. Check the rules

What assistance does the Borrowers Support Fund offer?

Clients who find themselves in a difficult financial situation can count on help from FWK in the amount of up to 2,000 PLN per month for three years. It gives a maximum of 36 months and support up to 72,000. zloty.

However, this money will have to be returned. Part of them, at least. The reimbursement begins two years after the payment of the last installment of the support or loan from the CEF. So if someone signs a contract with BGK and receives subsidies, the first installments will have to be paid in 2027 (three years of subsidies + two years of waiting).

The co-financing from CEF is repaid in 144 equal installments in the amount of PLN 500. If 100 installments are repaid without delay, the remaining part of the granted support may be canceled. Information on the repayment schedule, the amount of installments and the account number to which the repaid support should be transferred is provided by the bank that granted the loan.

If the borrower makes timely repayments, then the amount to be repaid will not be subject to interest, that is, he returns the same amount that he received from the FWK.

However, if the borrower fails to make the payment within the deadline specified in the schedule, then the borrower is obliged to return the support together with statutory interest accrued from the maturity date of the first installment of the support or loan return. The only fee referred to in the Act is the fee for additional verification of the application in the amount of PLN 100.

More about the Borrowers Support Fund we write in a special guide in Business Insider Polska.

Our partner’s advertising link is included in the text