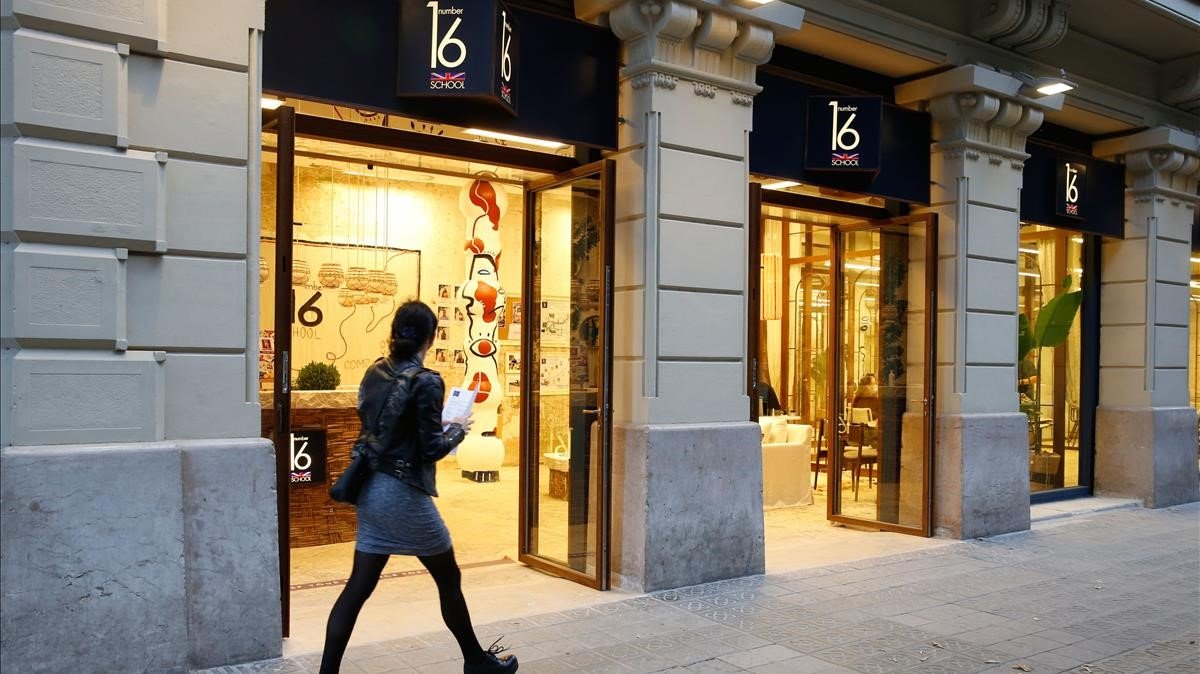 What do an English school, a specialty café, a clothing store and a suitcase store, a renovated kitchen and a ‘healthy’ restaurant have in common? The answer is simple, that all have opened in the middle of the pandemic and in Barcelona. Thus, Weekday, Number 16 School, Petit Travel, Syra Coffee, Kvik and Enlagloria can be called in these times as the brave of the coronavirus.

In the middle of the second wave with new restrictions, such as the curfew or the perimeter confinement of the weekend, are the shops and premises of Barcelona, ​​which now include the new residents of the city, with five premises in the Eixample and one in Gràcia. Despite the measures, everyone shares the satisfaction to open their new businesses and trust that everything will return to normal as soon as possible. To this is added that the flow of customers since its openings has not stopped. An example of this is Number 16 School Barcelona, ​​which has already had more than 500 students since the start of English classes or the Kvik kitchen and bathroom store, which had 90 customers last Saturday.

The hospitality sector has been one of the hardest hit by Covid-19 with many bars and restaurants on the brink of the abyss after the prohibition of opening to the public and with the service to take away as the only escape. Those who already had take away as one of the business lines have been able to adapt to the measures, but they do not have the same demand as before. Gloria Rodès from Enlagloria Salad House thanks her clients for their support: “There has been a lot of welcome from people for this type of service, especially in the place that we already had open from our long-time clients. If we continue every day it is for them&rdquor;.

The case of Syra Coffee, which has opened its fifth store in Barcelona, ​​is different because since its creation its format was already 100% to go. “Our premises do not have tables or stools, so it is not that it does not affect us, but the plan can continue at its own pace”, comments the CEO of the company Yassir Raïs. Both Enlagloria and Syra Coffee work with the concept of sustainability. In the first case all packaging that they use to make their salads is 100% biodegradable while in the second they offer the first free coffee with the purchase of one of their bamboo fiber glasses and a Discount of 20 cents of the following if the use of the glass is the same.

Most of the new stores had already planned to open before everything exploded, but they had to wait to be able to carry out the works. And for some of them it has not been easy at all. Hemi Roma of Kvik kitchens tells that they had to rethink the opening: “we we spent more than two months without billing almost nothing for the confinement and we had to take a mortgage to open the new business “. Others, like Jordi from Petit Travel, saw the opportunity walking through the streets and took advantage of it. With many businesses in liquidation or closed due to covid, there are traits of hope for some who take the risk.

Number 16 School Barcelona, located on Rambla de Catalunya 43, opened its doors on October 5. This English academy, which combines the system of face-to-face classes with telematics according to the client’s casuistry, has been affected by the new measures implemented by the Generalitat. The adaptation of the classrooms to the current situation has been strictly adhered to: “In addition to the obligation to wear a mask and the use of hydroalcoholic gel, we have structurally adapted the safety distance between students and we have added mechanical ventilation systems to guarantee air renewal ”, they explain from the entity. Due to the pandemic and with the learning of the first confinement in March, Number 16 already has an action plan to adapt the classes to the online system.

The idea of ​​opening a center in Barcelona has been around for a long time. With branches in Madrid, Valencia, Bilbao and Zaragoza, Number 16 had in mind the landing in Barcelona. Pablo Obis, Marketing Director of Number 16 School, comments that “a lot of people asked them for a long time to open a store in Barcelona through social networks ”. Since its opening the business already had 100 place reservations and, at present, “we already have about 500 students and growing”, says the same director.

Weekday, urban design for all audiences

The same success had Weekday on his first weekend in Barcelona. The Swedish firm, which is part of the H&M group, landed for the first time in Spain on October 16. The store, located in Passeig de Gràcia 33, is characterized by an urban and striking design. With the new capacity restrictions for shops, the flow of customers has been affected in recent days. Despite this, the organization states that they are happy with the new Weekday store: “We understand the current circumstances and we are very happy with the response we have received from customers.”

The Swedish brand was founded in 2002 and has been growing ever since. Combine the online service and creative markets with the existing market, acting in 97 countries online and in 16 countries in person. The rental of the premises of the last country to join the list was already planned before the pandemic, but for the same reason, opening procedures had to be delayed. Now, with the success it has had in the Catalan capital, Weekday plans to expand: “We always look for good business opportunities for the future, but we have to adapt to the existing global situation,” they assure from the brand.

Jordi Barberà Petit grew up with his grandfather as a reference and with a family business of more than 100 years, who, due to differences with his relatives, decided to start his own path and start a business when I was only 23 years old. Sixteen later and, in the midst of a health crisis, has decided to open its fifth store in the Catalan capital. The place, located in Plaça de la Llibertat in the Gràcia neighborhood, joins the two premises it had in Sabadell and two others located in Sant Cugat.

The trade, which was presented in society on July 3, was love at first sight for Jordi. During the de-escalation in June, the owner of Petit Travel comments that he was walking through the streets of Gràcia: “I was walking with my family during the de-escalation and I came across the real estate ad. I called the same Friday and on Monday I had already made the transfer to rent it ”.

The store specializes in travel equipment, both suitcases and backpacks. All in all, one of the star products are masks. Now, Jordi has to adapt day by day: “I have to think like a thermometer, I can’t think what I need in three weeks, but see what I need for this week.” He is also aware of the current situation, but remains positive. “Before I sold 40 suitcases a week and now I have sold 40 suitcases in three months; I prefer to earn less, but do something “, sentence the owner.

Syra Coffee, the specialty coffee at a good price

Yassir Raïs, founder and CEO of Syra Coffee, opened in 2015 the first coffee shop in Gràcia, on Siracusa Street, which gave the brand its name. Since then, the expansion of the coffee shop network has continued and now has 5 stores for coffee lovers. The last one on Calle Diputació 163, in the heart of Barcelona. What Yassir has in mind is to follow democratizing your coffee and bringing it to the whole world. “The idea is to open more stores. We are specialty coffee roasters and we only serve our own. The more the merrier, ”says the CEO, who has Firm expectations of reaching ten stores by the end of 2021.

By not having terraces or tables on its premises, the closing of bars and restaurants has done little harm to Syra Coffee, because the concept of the brand already focuses on take away. “We have maintained the product offering, with 100% arabic specialty coffee as one of our benchmarks “says the owner, who has achieved his goal:” To achieve a middle ground between a classic specialty cafeteria and a mass cafeteria “. Syra Coffee also has an online ecommerce platform for the consumer to buy other types of seasonal coffee, in addition to coffee makers, filter methods and all kinds of accessories. Being an architect, Yassir also carefully designs his small premises for an enriching experience for his clients.

The renovation of the house has been on the minds of many people during the lockdown. Hemi Roma, the co-owner of the Kvik franchise with her husband, is aware of this and, since the de-escalation began, comments she has not stopped receiving orders: “There was a boom to remodel kitchens and bathrooms in the summer and now it has stabilized.” Although it has not been easy for them, because they have suffered economic havoc for pay the rent of their other two stores in L’Hospitalet de Llobregat and in Carrer de Balmes, as well as the new one in Passeig de Sant Joan 47-49, which they signed two weeks before closing, and with the majority of workers in erte.

Despite the difficulties in opening the new premises, with the one-month grace period offered by the owner, with the design of the premises to be done in May and with the works started in July, Hemi sees that the opening is working. “Since the day we open (October 23) already we have many closed kitchens worth more than 70,000 euros ”. The success factors are attributed to three reasons: “We are the novelty in the neighborhood, the Eixample is a location in constant renovation with many old flats to reform and it is an area where many people live “. However, she is cautious for when the curious effect ends. With four people in the new Kvik store, they offer mid-range Nordic kitchens for all audiences.

This personal project by Gloria Rodés arose from a final degree project and from a trip to the United States that inspired him: “I saw that the fast food business model worked and that it would have a lot of potential in my land if we added the component of healthy food.” With the help of his family and with great enthusiasm, he managed to open his first store in 2019, in the heart of Barcelona on Carrer de l’Avenir in Sant Gervasi. A year later, the young woman from Barcelona has expanded her business to 209 Provença street. She signed the rental of the new premises in January and the opening was delayed until the end of September due to the extension of the works. In Eixample, Gloria explains the centralization of her kitchen: “We have built a large kitchen centered to absorb the production of our two businesses “.

Like Syra Coffee, the closure of bars and restaurants has affected him, but the DNA of his company already carried the stamp of take-out food. The investment has taken it to the digital field to give visibility and outsource its business and the result has been an exponential growth in orders, both on its website and in the Glovo service. First of all, “The business works very well” says Gloria, who has hit the mark by combining fast food with real food. “The idea is to keep growing and create a chain of restaurants in Barcelona and even expand it to Madrid “ the young woman concludes.