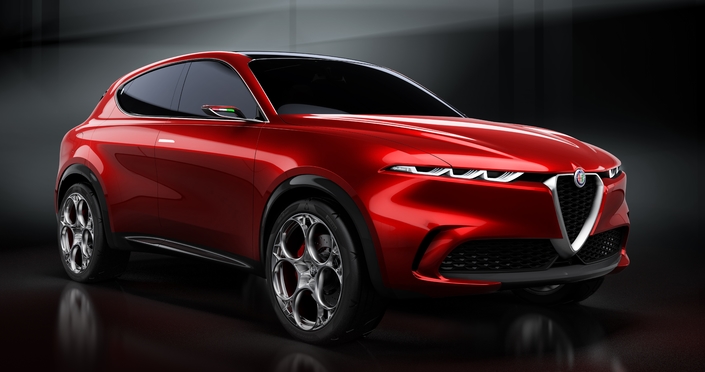 Alfa Romeo still in trouble. The brand had taken on colors, thanks to the Giulia sedan and the Stelvio SUV. But their launch dates from 2016 and 2017. Since then, the renewal and enlargement of the range have been stopped. Unsurprisingly, the sales curve started down again, with barely 100,000 vehicles sold in 2019. Alfa, however, maintains hope, with the promise of important innovations, including the Tonale SUV.

The Alfa Romeo launch calendar until 2022

This time, it is recorded. The Giulietta, launched in 2010, will leave the range by the end of the year and will not be replaced directly. Instead, Alfa will finally offer a compact SUV, the Tonale. It will be launched next year. To keep the customers patient, the manufacturer had presented a show-car at the 2019 Geneva Motor Show. We therefore already know the main lines of the model for the exterior and interior.

Of course, this is a concept, and the series version will be wiser … and above all less fine. Clearly, headlights and lights will be larger and less worked. We must also add more conventional door handles, at least at the front, and real mirrors. We still expect to have an attractive final result, with beautiful curves and delicate muscles.

About 4.40 meters long, the Tonale will share its underside with the Jeep Compass. It will be Alfa’s first plug-in hybrid vehicle. Logically, the technical package will be the same as that of the American model, which receives a 1.3 petrol at the front and an electric block at the rear, all delivering a maximum power of 240 hp.

The Giulia and Stelvio took advantage of a small update at the start of this year, notably with new equipment. But the “real” mid-career restyling, it is planned for 2021. However, we should not expect a big overhaul. The design will be revised in small touches, surely with elements taken up in Tonal, such as the strip of lights on the trunk or the front light signature in three parts. The interior will be refined once again. On the technical side, no big change either, Alfa has not planned to offer a rechargeable hybrid mechanism.

It’s a bit of the chef’s surprise. Alfa has long planned to launch a large SUV over the Stelvio, but the project has been shelved. However, a third backpacker is in the works, this time on the other side of the range. In its latest product plan, Alfa has indeed added a B-segment SUV, rivaling the Nissan Juke and Renault Captur.

Little information has been given yet, apart from the planned launch year, 2022, and the fact that a 100% electric version is scheduled. With this model, Alfa will considerably increase its coverage of the European market. A small SUV represents a very strong sales potential on our continent, which makes it a crucial vehicle for the survival of the label. The model should surely share her underwear with the little adventurer that Jeep is preparing for his part.

The return of the abandoned GTV and 8C

On June 1, 2018, Sergio Marchionne unveiled yet another stimulus plan for Alfa, with the umpteenth promise of an avalanche of new products. Among them, two vehicles typed “passion” which were to revive legendary names: GTV and 8C. The GTV was to be a high-end coupe, probably based on Giulia, with a hybrid block of more than 600 hp. The 8C was to be a supercar of over 700 hp with a carbon fiber structure. But at the end of 2019, Alfa announced that these projects had been abandoned. The recovery hoped for in 2016 with the Giulia and Stelvio has not borne fruit. The brand is therefore forced to save money. It must focus on projects with strong commercial potential.

There are therefore no more models outside the traditional categories, since the 4C has just been stopped. To keep a foothold in the sports model market, Alfa still designed a new Giulia GTA.