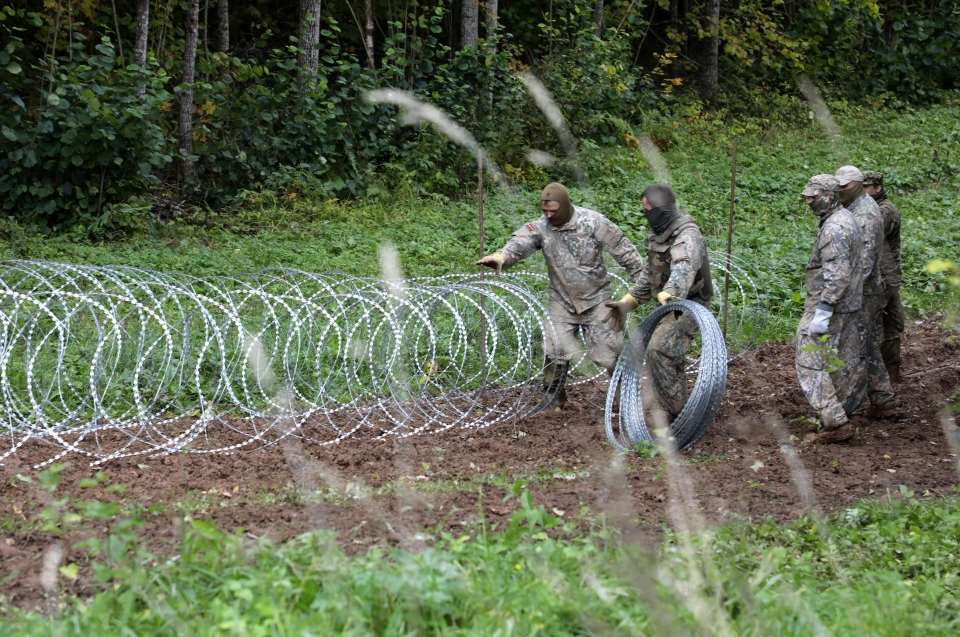 Initially, the company will provide strip preparation, removal of overgrowth, bushes, grass, hogweed and assembly of posts. The fence site will be prepared for the State Border Guard in priority stages, using a technological solution that will significantly complicate border crossing attempts.

Mārtiņš Šteins (“Development / For”), Parliamentary Secretary of the Ministry of the Interior, said that when signing the contract for the supply of barbed wire, a fence will be installed in the next two weeks – in October – in the priority phase.

Wendy Pikše-Kuchma, a representative of the State Security Agency, informed LETA that the contract for the supply of barbed wire for 37 kilometers was concluded for 275,650 euros without value added tax and Aimasa must deliver the barbed wire within 15 days from the date of concluding the contract, ie by October 14. .

The contract for the installation of a temporary fence with Aimasa was concluded for 2,035,394 euros without value added tax.

According to “firmas.lv” data, the largest owner of the construction company “Aimasa” is Sandris Apsīts – 50%, 40% of the shares in the company belong to Ainārs Cakars, but the remaining 10% – to Jānis Dreimans. The company has not yet submitted last year’s report, but in 2019 it had a turnover of 40.5 million euros and a profit of 2.7 million euros.

On the other hand, the Minister of the Interior Marija Golubeva (“For Development / For!”) Noted that it should be ensured that the permanent engineering structure could be put into operation after the completion of works and that there would be no situation on the Russian border when part of the fence is must be rebuilt.

The Ministry noted that intensive work is currently underway to ensure the construction and commissioning of the Latvian-Belarusian border as soon as possible by 2024. Necessary amendments have been made to regulatory enactments in order to continue implementing border construction works. Companies that have previously participated in the construction of the border are no longer working. Criminal proceedings are currently underway in connection with the construction of the border on the Russian-Belarusian border, as a number of violations have been identified and a possible waste of public funds has been identified.

National security agency decided not to continue cooperation with the company “Brief” on the supply of barbed wire fence for the protection of the Latvian-Belarusian border, as it inability fulfill the order. The Agency organized a re-procurement.

It is planned to build a temporary 37-kilometer-long barbed wire fence on the Latvian-Belarusian border. This will cover the most critical border areas. Already imposed Slovenian as a giftfor you, which was enough for a 1.7-kilometer stretch. Current there is still a price inquiry for another type of 74 km long barbed wire.

The commissioning of the permanent fence on the Latvian-Belarusian border is planned no later than by 2024. The Minister of the Interior has previously emphasized that commissioning takes time, but the fence itself will already be built sooner.

The government, taking into account the number of detected cases of illegal crossing of the Latvian-Belarusian border and its rapid increase, previously decided to declare a state of emergency from 11 August to 10 November in Ludza, Krāslava, Augšdaugava districts, as well as in Daugavpils.