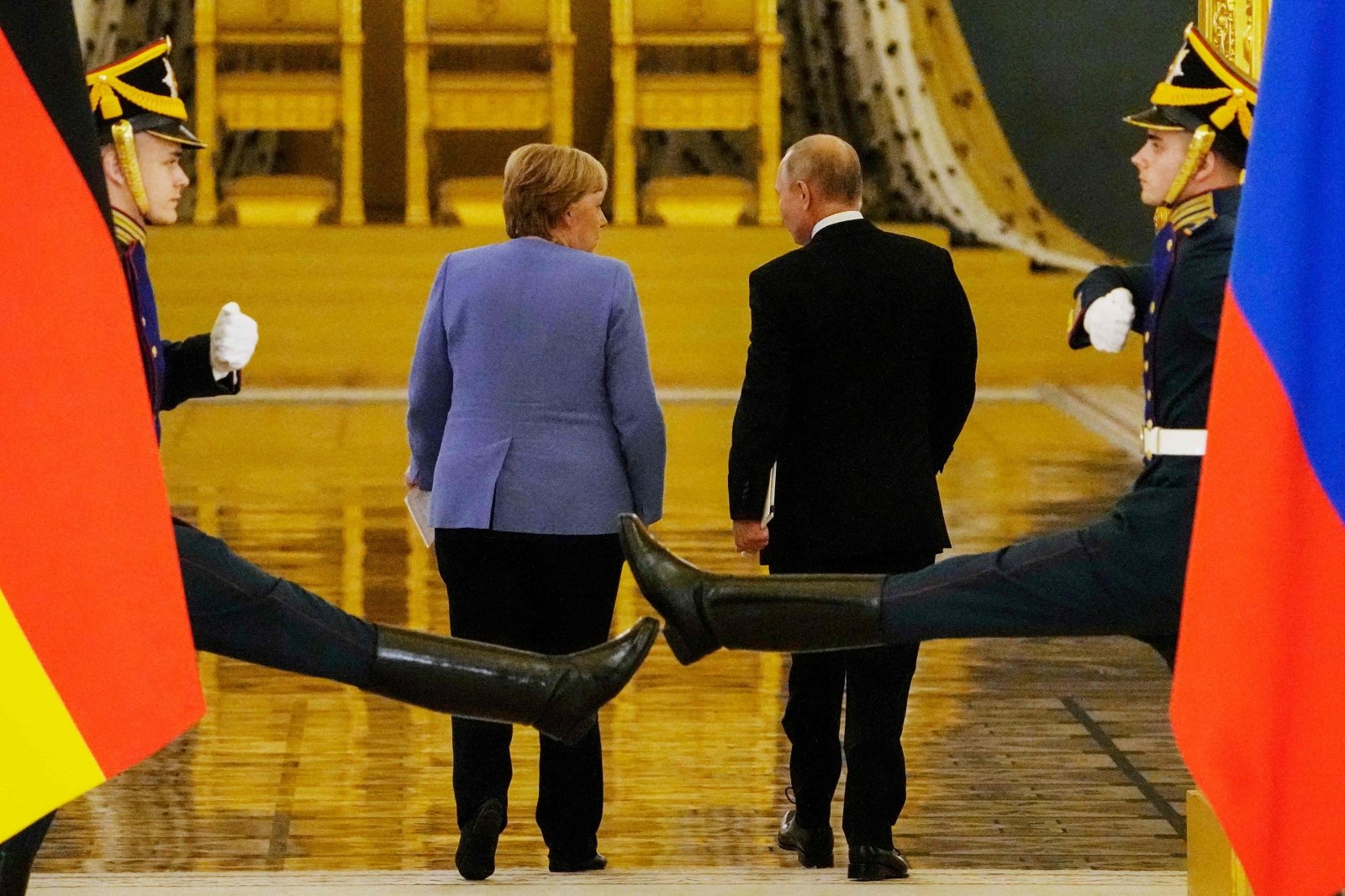 “This is due to a variety of reasons: ongoing repairs on the Norwegian continental shelf, weak imports of liquefied natural gas (LNG) to Western European terminals, below-average-filled underground gas storage, and record high emission and permit prices (coal). demand in electricity generation).

Well, and messages like “Nord Stream 2“Postponing the start of operations until the beginning of next year, thus contributing to this,” he noted.

It was previously announced that Nord Stream 2 could start operating on October 1, but later the start has been postponed to at least the beginning of 2022.

At the same time, Russia’s Gazprom is restricting its gas supplies to Europe. According to Lithuanian Minister of Energy Dainius Kreivis, this may be a kind of pressure on Nord Stream 2.

“Russia has slowed gas supplies and depleted storage facilities from Italy to Germany in order to influence and put pressure on EU member states, especially Germany, to speed up the launch of Nord Stream, which also affects gas prices.” he said.

A group of MEPs who have called on the European Commission to investigate Gazprom’s role in rising gas prices are also seeing possible manipulation by Russia. For their part, the Kremlin explained that the rapid launch of Nord Stream 2 could solve the problem of natural gas shortages in Europe.

The director of the Center for Eastern European Studies has no doubt that Russia uses energy raw materials as a means of geopolitical pressure Linas Kojala.

“In this context, even seeing systemic issues such as a pandemic, rising consumption, it is difficult to deny that the calculation ultimately lacks some targeted action by the Kremlin, pressing on Western countries.

At the same time sending a signal that the very recent announcement of an agreement between Germany and the United States to supposedly help Ukraine remain a gas transit country (and the West will press Russia if this is not done) has virtually no potential, as Russia is already clearly sending a signal that it controls supply and has a lot of leverage, which is very sensitive for European countries, ”he told Delfi.

Kojala said he agreed with the assumptions that Russia was restricting gas by thinking about Nord Stream 2.

“Especially based on past events, Russia’s treatment of energy raw materials. It is not the only factor in the gas market today, but it is an important factor, “he said.

The political scientist also said that it is still difficult for Russia to assess the results of the elections in Germany. “Because there is no government yet, it is not yet clear who will form it,” he noted.

“I think there are quite different potential attitudes on these issues, as would the Socialist-led government, which is always inclined to have a more open dialogue with Russia, and the krikdem government, which, especially under pressure from the Greens, could possibly change their attitudes compared to as it has been for the last 4 years.

At the moment, such differences, but still the main thesis valid today is that these elections and their results, whatever the coalition, probably do not promise any significant changes in Germany in relation to Russia, “L. Kojala discussed.

How to get gas

LithuanianAmber GridAccording to the data of the exchange Baltic Get Baltic, at the end of September 2020 the average price of a gas megawatt-hour was about 10 euros, and on September 27 this year, the average number of transactions was about 50 euros.

According to L. Zadarackas, Ignitis’ natural gas portfolio is diversified and the company receives this raw material under short-term and long-term contracts both through pipelines and through the Klaipėda LNG terminal. Part of the gas is also stored in the Inčukalnis gas storage facility in Latvia.

“The prices of the contracts concluded by the company are directly linked to the price indices of the European gas exchanges, so if prices rise there, they also rise in Lithuania. At present, the rise in gas prices recorded throughout Europe is directly reflected in the Lithuanian gas market.

This can also be seen by observing the price dynamics on the Get Baltic regional gas exchange, where prices are strongly correlated with the European TTF (Title Transfer Facility) index, ”he noted.

In Lithuania, only Ignitis provides natural gas to households. At that time, the business is supplied with gas by nine other suppliers, seven of which also participate in the Get Baltic exchange.

Natural gas is bought on this exchange and Vilnius heating networks (VŠT). According to Rasa Gudė, the company’s Chief Financial Officer, natural gas consumers (buyers) and natural gas sellers not only from Lithuania, but also from Latvia, Estonia and Finland participate in the Get Baltic Exchange.

“Both parties provide natural gas purchase / sale orders at a certain price acceptable to them. When the expectations of the buyer and seller of natural gas coincide (ie the price of the buy order is greater than or equal to the sale price), the transaction takes place. The parties to the transaction are anonymous. The trading activity of the Get Baltic gas exchange is from 7 am to 8 am to 7 pm. in the evening. The company’s employees monitor gas prices at 12 noon. 24 hours a day, 7 days a week, without holidays and public holidays, and tries to buy gas at the most favorable time, when prices are the lowest, ”she said.

R. Gudė said that according to the legislation, at least 50% of the must consume the consumed gas through Get Baltic.

“Bilateral transactions are also possible, which can be concluded at a price not exceeding the average price on the stock exchange during the relevant period. VŠT initiates public procurement on the basis of bilateral transactions in an effort to purchase gas at a lower price than the exchange price, but does not always receive suppliers willing to participate in the tender. The purchase of natural gas announced on August 23, 2021 for the fourth quarter of 2021 did not take place because no bids were received, ”she noted.

The representative of VŠT also said that the supply contracts concluded with the suppliers on the natural gas exchange are anonymous and valid until the day of execution. Bilateral purchase agreements are concluded with other suppliers who offer the most favorable gas purchase price.

“Gas is purchased at the current market price. The average exchange price is close to the price of the European Gaspool and TTF exchanges, but sellers participating in the Get Baltic gas exchange often apply a margin to this price, which consists of gas degassing, storage, transportation fees, suppliers’ profit share, etc. Currently, the price of natural gas on the Get Baltic Exchange fluctuates around 48-49 Eur / MWh, but in October, taking into account the emerging prices throughout Europe, growth is expected to reach 70 and more Eur / MWh, ”R. Gudė pointed out.

The interlocutor also pointed out that the storage capacity of natural gas is very limited.

“For some time, they can be stored at the Klaipėda LNG terminal if they are delivered by gas pipelines, but there are losses of natural gas during their evaporation. Another option is to store natural gas in the Inčukalns storage facility in Latvia, but there is a lack of storage capacity and storage costs, which increase the price of natural gas. Natural gas storage is most commonly used in an environment of low gas prices.

Natural gas reaches the company through the gas transmission networks of the natural gas transmission operator. Natural gas is used mainly during the heating season to cover the significantly increasing peak demand for heat production in the company’s gas water and steam boilers at the Vilnius CHP plant and in the district and small boiler houses. This summer, only biofuels were used to prepare the hot water for the needs of Vilnius residents. During the heating season, the fuel ratio is 60 percent. renewable energy sources and 40% gas, ”said R. Gudė.