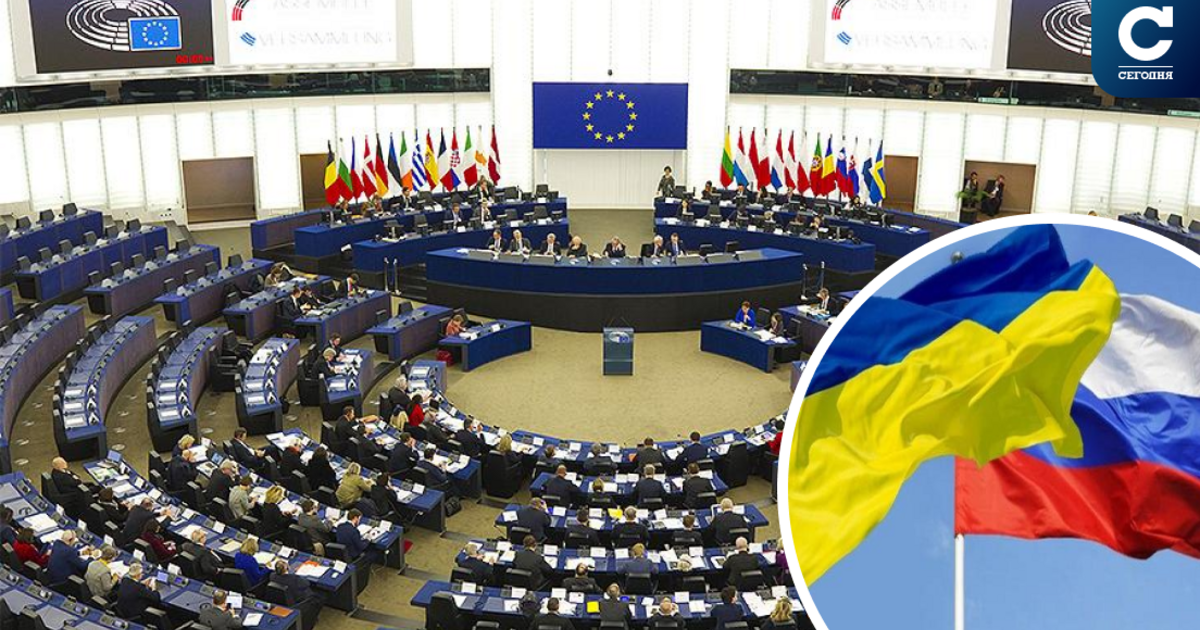 In the EU, the Kremlin regime has been called a stagnant authoritarian kleptocracy led by a president-for-life surrounded by oligarchs

Ukraine is satisfied with the EP’s report, but not very much in the Kremlin. Collage “Today”

The European Parliament (EP) recommends not recognize parliamentary elections in RussiaIf they pass with violations, European deputies consider Russia itself the biggest challenge to European security and called for support of Ukraine.

This is stated in the adopted report on the future of relations between the EU and the Russian Federation, which was supported by 494 votes against 103.

Assessing the state of relations between the EU and Russia, the European Parliament made it clear that the European Union separates the Russian people and the Putin regime. MEPs designated the current Russian government as “a stagnant authoritarian kleptocracy headed by a president-for-life surrounded by oligarchs.”

Also in Brussels, they call for reducing the EU’s dependence on Russian gas, oil and other raw materials while Putin is in power. A European Green Deal and an increase in new resources will play a critical geopolitical role in achieving this goal.

The EP is concerned on the eve of the parliamentary elections in the Russian Federation. In this regard, the report contains a recommendation not to recognize the Russian parliament if it is elected in violation of democratic principles and international law. (By the way, if Crimeans and residents of the so-called “L / DPR” participate in the elections, it will already be illegal.)

“Russia can be democratic, and defending the principle of ‘Democracy First’ in EU-Russia relations is our first task. The EU and its institutions must proceed from the assumption that change in Russia is possible. to the Kremlin regime when it comes to protecting human rights – this is the essence of strategic interaction with the Russian people. It is about ending internal repression, returning the choice to the people and freeing all political prisoners. “– said the speaker, MEP from Lithuania Andrius Kubilius.

Ukraine is satisfied with the report

Foreign Minister Dmitry Kuleba positively assessed the document of the European Parliament and called it good.

“It is very important for us that the document notes the impossibility of returning to normal cooperation, what is called business as usual, until Russia stops its aggressive policy and hybrid war against the EU, the Eastern Partnership countries, which include Ukraine, and the territorial integrity of Georgia, Moldova and Ukraine will not be restored within the internationally recognized borders “, – he said on briefing.

What they say in the Kremlin

Press secretary of the President of the Russian Federation Dmitry Peskov, as expected, criticized the report of MEPs, report Notifications.

“The essence of this document can only cause regret. Unfortunately, there is no talk about the need to establish a dialogue, about the need to resolve existing problems and disagreements through communication at various levels and through various channels. that this is a document that is purely advisory in nature “– he declared.

Recall that earlier we wrote how Zelensky reproached the EU and the US for exerting little pressure on Russia… The issues of Donbass and Crimea should be on the radar of international diplomacy, experts say.