The European Union closed its market temporarily for Argentine citrus

The European Union yesterday decided to temporarily ban citrus imports from Argentina. This is due to the appearance of Mancha Negra (Phyllosticta Citricarpa) mainly in the shipments of lemons that are produced in the Argentine Northwest. Weeks ago, that sector had already limited itself and stopped exporting. Now the measure will impact shipments of oranges and mandarins, which are produced in Entre Ríos and Corrientes.

This measure will mainly affect the export of oranges from the NEA, since it is in the middle of the commercial season and this disease has not yet been detected in shipments dispatched from that area in European ports.

From this situation, both the Chancellery, the Ministry of Agriculture, Livestock and Fisheries and the Health and Food Quality Service, are negotiating with authorities of the European bloc to unblock this situation, informed Infobae health agency sources.

As stated in the measure adopted by the European Union, “these recurrent interceptions show that the phytosanitary safeguards currently in force in Argentina are insufficient to prevent the introduction of the specified pest in the Union. Therefore, there is an unacceptable phytosanitary risk due to the presence of the pest in the specified fruits, and that risk cannot be reduced to an acceptable level ”.

“As a result, the introduction into the Union of the specified fruits should be temporarily banned, regardless of whether they are intended exclusively for industrial uses to process into juice or not. This temporary ban should apply until April 30, 2021 to address the current risk of introduction and spread within the Union of the specified pest ”and“ allow Argentina to update its certification system and be audited by the Commission. That date should be revised as necessary, based on the audit findings, ”the measure explains. The ban will take effect two days after the measure is published in the Union’s official gazette on Sunday. 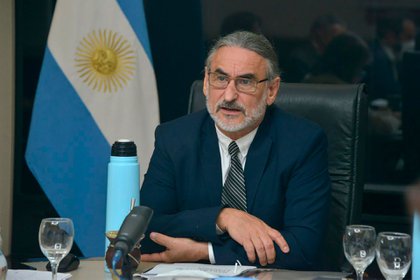 The Minister of Agriculture, Luis Basterra, is one of the officials leading the negotiations to reverse the decision of the European Union (Ministry of Agriculture, Livestock and Fisheries of the Nation)

However, Senasa sources consider this decision as “unilateral and without prior notice. The reasons expressed by the European Union have to do with the phytosanitary risk related to the Black Spot disease”.

Thus, the sources commented that the European bloc “ignored the request that we made from Argentina to apply the concept of regionalization, excluding from the suspension sweet citrus fruits from the NEA region that have not had any interception of the disease. The decision was rushed since from the international sanitary normative point of view the laboratory tests of the interceptions made in lemons and oranges were not carried out. Therefore, there is no scientific endorsement of laboratory tests ”.

Likewise, from the agency they hinted that this adopted measure can also respond to commercial rather than health issues and that “to this are added the proposals made publicly by the Spanish citrus sector on tariff issues. This translates into a more commercial problem than a real health one ”.

Yesterday, the Coordinator of Organizations of Farmers and Ranchers of Spain (COAG) asked the European Union to take “additional and effective measures” in citrus imports and indicated that the operation that takes place in the sector of the lemon and imports from countries such as Argentina, which “accumulates almost 60 interceptions of quarantine pests, well above the data from previous years,” reported the Europa Press agency.

In this sense, the entity claimed that “the measures must be immediate, forceful and effective to protect our crops from irreversible damage caused by pests or diseases and also must be maintained for future campaigns, as long as it is not ensured that there are no problems , both from this and from other origins “.

For its part, Senasa authorities are doing an internal audit and are looking at a change in the control process that was generated during the previous management, since they suggest that coordination was transferred to the monitoring entity of the Northwest Argentine Phytosanitary Association (AFINOA ).

Share
Facebook
Twitter
Pinterest
WhatsApp
Previous articleAccidentally drops a small black object while taking a shower, this woman is in shock when she finds out the facts behind it, it turns out that her friend’s husband’s husband accidentally installed a hidden camera
Next articleNearby monstrous star Betelgeuse experienced dramatic eruption

Minor who disappeared in Bello is already with his family

To kill the coronavirus, Russian researchers claim to have developed a gas emitting UV

“We know the viruses, we know what they need” – Science

In the fight against the corona virus, the search for drugs and a vaccine...
Read more

Coronavirus in Argentina: authorities warn that the number of daily cases could continue to increase