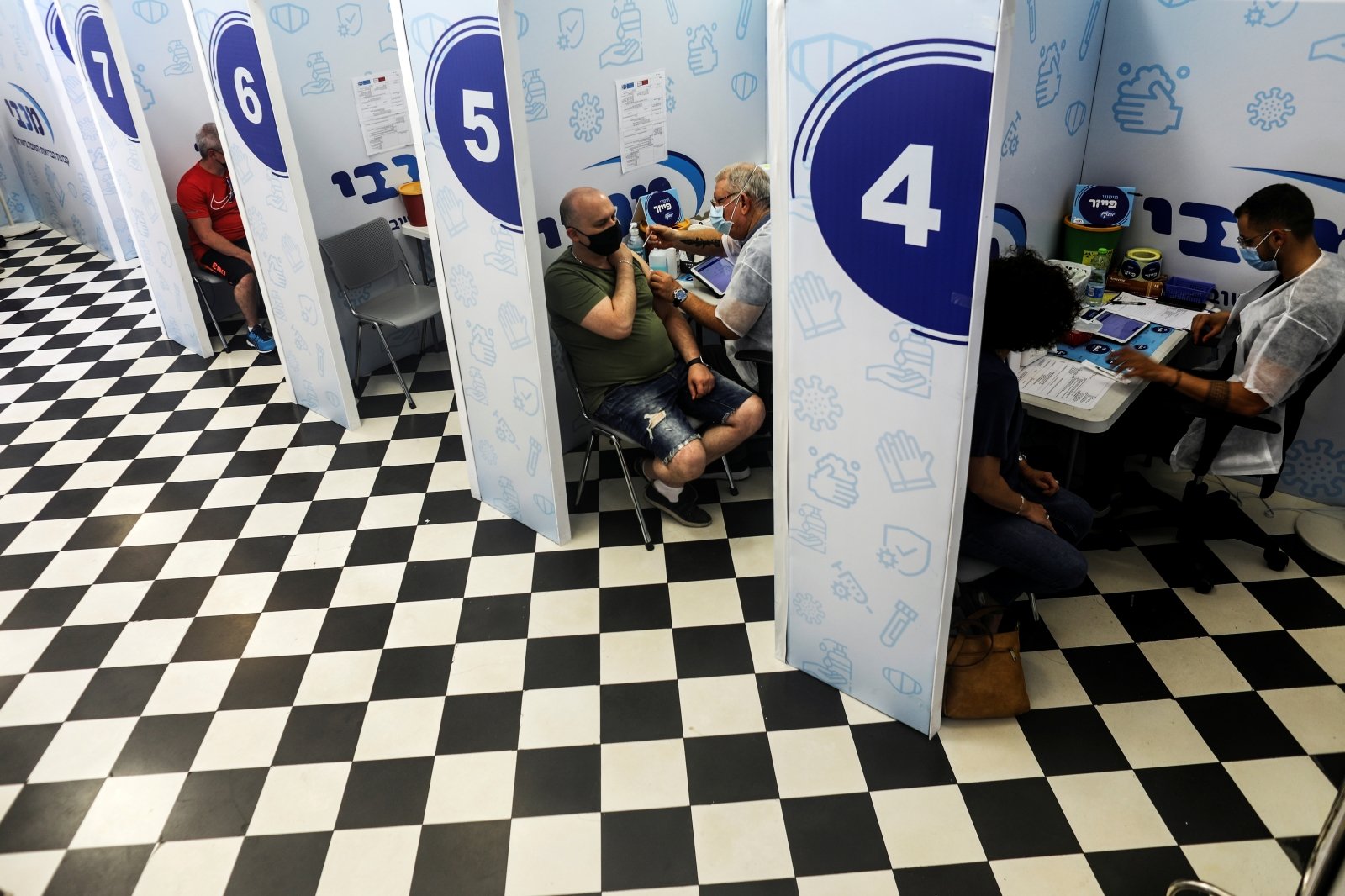 Approximately half of the 600 people currently hospitalized in hospitals in the country who developed severe COVID-19 received two Pfizer-developed vaccines doses. Given that 5.4 million have been fully vaccinated. The Israeli population appears to be at low risk of developing a severe form of COVID-19 after two doses of the vaccine, Reuters reports.

Most of these patients received two doses of the vaccine at least five months ago, are over 60 years of age, and have chronic conditions that worsen coronavirus infection. For example, diabetes, heart and lung disease, cancer and inflammatory diseases treated with immunosuppressants were reported by 11 doctors, healthcare professionals and officials interviewed by Reuters.

Israel additional doses of COVID-19 vaccine began to be offered in July (for those aged 60 years and older) and eventually expanded the age group. The United States (USA), quoting data from Israel and other countries, recently stated that from September, all Americans will be able to receive additional doses of the vaccine.

Other countries, including France and Germany, are currently planning to vaccinate only the elderly and people with weakened immune systems.

“Infected, fully vaccinated patients are elderly, sick, often bedridden before they became ill with coronavirus, immobile, and already in need of care,” said Noa Eliakim, head of the ward for coronavirus at Rabin Medical Center in Petah Tikva. Raz.

Conversely, “Unvaccinated COVID-19 patients are young, healthy, able-bodied people, and their health is deteriorating rapidly. Suddenly they need medical oxygen or a respirator, ”she said.

The Israeli Ministry of Health has issued a new alert: a report by the ministry says the effectiveness of the Pfizer vaccine in protecting against a serious form of the disease has fallen by more than 90 percent. to 55% for people 65 years of age and older who received the second dose in January.

Disease experts say it is not clear how representative these figures are, but agree that they are worrying, especially given the evidence that the protection provided by the vaccine against infection is weakening.

Experts do not know whether this is due to the time since the vaccine, the ability of the highly contagious delta strain to avoid the protection provided by the Pfizer vaccine, the age of the vaccinated people and other health problems, or all of these factors.

Health trends have been reported by health officials in the United Kingdom (UK) and the US, the other two countries with high vaccination rates and an increased incidence of delta strains.

About 35 percent. In recent weeks, people hospitalized in the UK infected with the delta strain have received two doses of COVID-19 vaccine. According to federal data, nearly three-quarters of cases in the U.S. where fully vaccinated people end up in hospital or die were found in people aged 65 and older.

According to U.S. officials, their plan for additional vaccination is based on fears that the protection afforded by vaccines against the severe form of COVID-19 will diminish over time, including in younger adults.

“We are closely following developments in other countries and are concerned that we will see the same situation in Israel as in America, with worsening infections among fully vaccinated people over time,” Rochelle Walensky, director of the Centers for Disease Control and Prevention (CDC), told a news conference.

The World Health Organization (WHO) has repeatedly urged rich countries not to rush to receive additional vaccines because poorer countries have not yet received COVID-19 vaccines at all.

The Delta strain, first detected in India, has become the dominant version of the SARS-CoV-2 virus worldwide and has accelerated a pandemic that has already claimed more than 4.4 million lives. lives.

With the advent of the delta strain in Israel, the number of new cases per day has increased from single digits (June data) to about 8,000. About half of those infected are fully vaccinated, but many have mild to moderate symptoms.

Highly at risk are vaccinated Israelis, including those 60 years of age and older. Before the delta strain appeared in the country, it was possible that some people’s immune systems were weakened, and that people with other diseases might not have responded to the vaccine at all.

“In some cases, the vaccine did not elicit an immune response, and such people did not develop antibodies to a specific disease or immunosuppressive drug,” explained Dr Mevorach, head of the ward for coronavirus patients at Hadassah Hospital in Jerusalem. He provided several examples of co-morbidities: chronic lymphocytic leukemia and lymphoma.

Of the 3 million. clients of the vaccinated Israeli population, Clalit, the nation’s largest healthcare provider, have had a severe COVID-19 form since June 600. About 75 percent. they are over the age of 70 and received the second dose at least five months ago, said Ran Balicer, Clalit’s chief innovation officer. By the way, almost all of them suffer from chronic diseases.

“We practically do not see young vaccinated people with severe COVID-19,” he added.

According to UK doctors, they also face fully vaccinated patients of a similar age who develop a severe form of COVID-19.

“Given their age and comorbidities, the vaccine given to these people is expected to be less effective than other age groups,” said Tom Wingfield, a clinical lecturer at Liverpool School of Tropical Medicine.

See also  "Corona virus will disappear after the elections"

The U.S. delta strain has caused a new wave of morbidity and mortality, especially in states where vaccination rates remain low. The delta strain is also infected in people who have been completely vaccinated, but it is likely that older people are more likely to have a severe form of the disease.

Texas 92 percent. cases of COVID-19 infection and death in fully vaccinated populations were reported in people over 60 years of age, and 75% the victims had a comorbidity that exacerbated the course of COVID-19, a spokesman for the Department of Public Health reported.

Preliminary data from Israel suggest that additional doses given in the last few weeks reduce the risk of coronavirus infection in the elderly compared to the population that received only two doses.

In addition, Israeli doctors say fully vaccinated patients recover faster even without receiving an additional dose of the vaccine.

The vaccine does not prevent the infection, but facilitates the course of the disease, said Alex Rozov, head of the ward for people with coronavirus at the Barzilai Medical Center in Ashkelon.

“According to our conservative estimates, vaccinated patients recover faster – treatment is more effective if there are antibodies in the body,” he added.