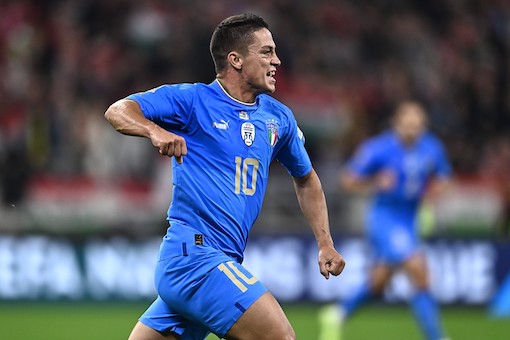 Everything will change. The attention on its place in the field as the media treatment. The story of the young and inexperienced team no longer holds up

There are many angles from which to observe the explosion of the Raspadori phenomenon today celebrated by all as the new center forward of the national team. Sconcerti approaches him to Del Pierothe classic term of comparison remains Paolo Rossi. Virtually no one talks about Immobile. From the Neapolitan point of view, the absolute novelty is that the national center forward is a Napoli player. If Italy had gone to the World Cup, most likely he would have been leading our attack: Schillaci thirty years later. It is yet another confirmation of the terrific transfer market signed by De Laurentiis and Giuntoli. A session that will be talked about for a long time. And which will be the subject of many papers on the management of football companies.

But moving on to more strictly technical aspects, Raspadori’s media growth is wrapped in a package that says “handle with care”. Without prejudice to the authenticity of the 22-year-old footballer who had sparkling eyes already at the medical examinations at Villa Stuart. That dreamy expression as if he didn’t seem real to be there. But the balances change quickly, even for the so-called good guys. It was played in Glasgow just two weeks ago. In front of the cameras Spalletti pampered him as if he were his own creature. And it is also true, he strongly wanted him in Naples, to the point of convincing De Laurentiis to sign a contract for 32 million euros. He was able to choose with apparent ease whether or not to deploy him from the first minute. And Raspa with Napoli played three games from the beginning: with Lecce (he was replaced at the end of the first half), with Spezia (which was the turning point, with the goal in the final and Spalletti who kept him on the field despite a performance until unconvincing there) and in Milan. In the Champions League he only played the 13 minutes in Glasgow, in which he scored the splendid 2-0 goal.

Obviously Spalletti will continue to make his choices. He has a deep and strong squad available at the same time. Napoli can count on three strikers who would be holders in many Serie A formations, even at the top. What will change now will be the reactions. Of the environment, the environment, and above all of the media. So far, commentators and journalists have credited the narrative also espoused by Spalletti and that is that Napoli were the young team set up after the tumultuous summer marked by departures that would have left an unbridgeable emotional and above all technical void. Now this storytelling is starting to show signs of obsolescence, it has been outdated by the evidence. As for Kvaratskhelia and Kim (remaining only to new arrivals). And now also Raspadori. Who will no longer be treated as a young man from the provinces who went to gain experience in the city but as the predestined one.

We talk about excesses, we know. Journalism, the media universe – especially football – thrives on excesses. There is an inordinate need for cover men, let alone after the disappointment of the World Cup. And now that cover footballer is Raspadori. That the football nation lives as the man capable of solving the age-old goal problem, after years spent between Immobile (very strong in the league but sterile in the national team) and Belotti. Also and above all the tactical position of him in Napoli will be the subject of discussions. Excessive, bizarre, out of place, but there will be. Because today we are talking about the one who was crowned the new 9 of Italy (even if he played with 10). And in Napoli he is not a center forward, at least not always. Just like him, he is not always the owner.

Raspadori emblem of a change of attention towards Napoli. An obligatory metamorphosis for what is in effect a great Italian football team. Who tore Liverpool apart. Who won at Lazio and Milan. Which is first in the standings. Who has overcome without difficulty the absence of the one who is considered his point man: Osimhen. Who has fished on the market an authentic jewel like Kvaratskhelia and a defensive column like Kim.

Napoli will no longer be treated as a young, novice team. It is a fairy tale that no one drinks anymore. Let’s say you had a short but intense adolescence. Now Spalletti’s team will be treated and judged by a mature, solid formation, with high-quality players, a very prepared coach who is at the same time an expert and an innovator, and a club that in Italy has not followed the path of zero parameters but has known to fish very well in little-known markets. Raspadori’s benches will now be viewed and judged differently. It is the price of success.