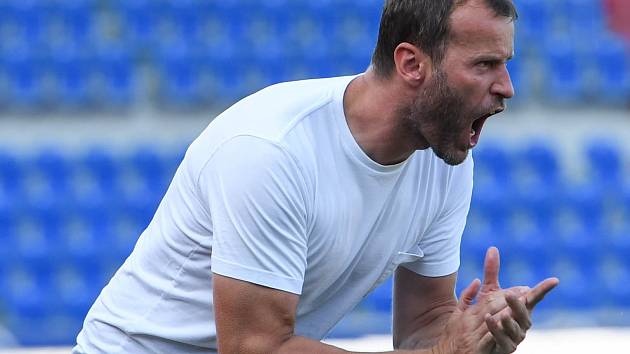 What was it like for you to be accompanied by a film crew during the first first league coaching steps?

I won’t lie, in the first phase it was a bit of a shock for me. For the first time, it was in that match in Příbram, where I had the premiere in the form of a standoff for one match for coach Kozel. I wanted to help the boys at all costs, it was a test for me too, because suddenly I found myself on the first league bench and I felt a great responsibility. And suddenly I learned that there would be a camera in the cabin. It was already a somewhat stressful situation, and suddenly there was supposed to be a crew with a camera that you have in front of you, guarding every word. But I wanted to endure the situation, I had to put it behind me. I said to myself that if I want to train and be there in the future, I have to learn to handle these situations as well.

Did you notice the camera near you?

Gradually, I completely pushed her out of my perception. There were so many responsibilities around preparing for the match that I forgot about the camera after a while.

I’m used to her. I took the staff almost as part of our team, just as I take our PR staff. You get used to it over time, I think it was mutual. We stopped dealing with the present camera, the film crew again understood where it would be the least obstructive.

Has there been a mutual crisis situation?

Not at all, there was no crisis. Sometimes it happened that I crashed into them, for example, sometimes I had to send them to a corner, so that they wouldn’t get stuck where they didn’t. Somewhere the locker rooms are really small and there was not much space, but they learned over time. At first they were so godly, they went exactly where they wanted and sometimes interfered, but gradually they also found their places, they began to be so warehouse, so they could be with us in those areas, but they did not shield.

How about a lot of that team intimacy on the screen now?

With that, everyone went for it, and with that knowledge, I accepted the camera as well. Maybe he won’t give someone what they see and hear in complete context. Not everything will fit in the film, so some statements may be a little out of context, but if the viewer understands which statements fell in which situation, they will understand. At times, of course, a sharper expression flew, but that belongs to the cabin. Audiences in the cinema get to places they can’t normally see. And the world is different.

Are you a fan of such film projects?

I saw Sunderland. I really liked that, even though some situations seemed absurd to me. But these are the Islands, a completely different world, a different mentality of the people. Although this documentary about Baník will show that even here in Ostrava people perceive their club differently than anywhere else in the country.

The lord of Karviná, the end in Baník and Baroš: No war, we have already said everything

The coronavirus interfered with the creators’ plans. So instead of Baník with full stadiums, Baník was caught with fans behind the fence…

Of course it’s a shame. Huge. But even this time brought certain specifics that you will not know anywhere else than in Baník. Maybe the match in Příbram. It was played in the winter, in Příbram, far from Ostrava and especially the situation when the fans were not allowed to go to the stadium. In the same way, several fans went to Baník in these conditions to cheer from behind the stadium, even though they knew they would not see football. But they wanted to be with Baník. You just won’t experience it anywhere else in the Czech Republic, and the film will show this. So even in this respect, the document is unique.

I must say that before I became part of the Miner, I knew that the Miner had a huge impact on people’s lives. It wasn’t until I became a coach that I realized how much people live with this club. And that it goes beyond my original ideas. I received an invitation from the pastor, and I gladly went there. Not out of duty. There were also a few fans and it was an interesting experience for me. And another proof of what I said a moment ago. Miner is truly an extraordinary story.