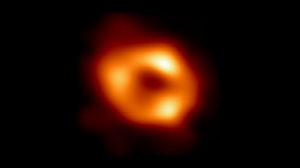 The supermassive black hole at the center of the Milky Way has been revealed for the first time. After the first public appearance of the M87 black hole belonging to the Virgo Cluster in 2019, it is the second successful detection of a black hole in three years. It is expected to unravel the secrets of the universe, such as the proof of Einstein’s general theory of relativity, as well as the formation process of our galaxy.

The Sagittarius A black hole is the closest black hole from Earth that humans have directly observed and is a strong subject for black hole research. It is about 27,000 light-years away from Earth and is about 1/200th the distance from the solar system compared to the M87 black hole. Its mass is about 4 million times greater than that of the Sun. However, since it has a mass 1500 times smaller than that of M87, the gas flow around the black hole changes rapidly, and the image suffers from severe scattering, making it difficult to observe compared to M87.

More than 300 EHT researchers from 80 institutions around the world participated for this study. Domestic researchers also performed various roles. Researchers at the Astronomical Institute performed various research processes in the operation of EHT’s main telescopes, the Atacama Millimeter and Submillimeter Interferometer (ALMA) in Chile and the James Clerk Maxwell Telescope (JCMT) in Hawaii. In addition, data from the East Asian Space Radio Observation Network (EAVN), including the Korea Space Radio Observation Network (KVN) operated by the Astronomical Research Institute, were also used as auxiliary data for interpreting the research results.

Dr. Son Bong-won, Cheon Moon-yeon, said, “The Sagittarius A black hole is the closest black hole among the black holes directly observed by mankind due to collective intelligence.