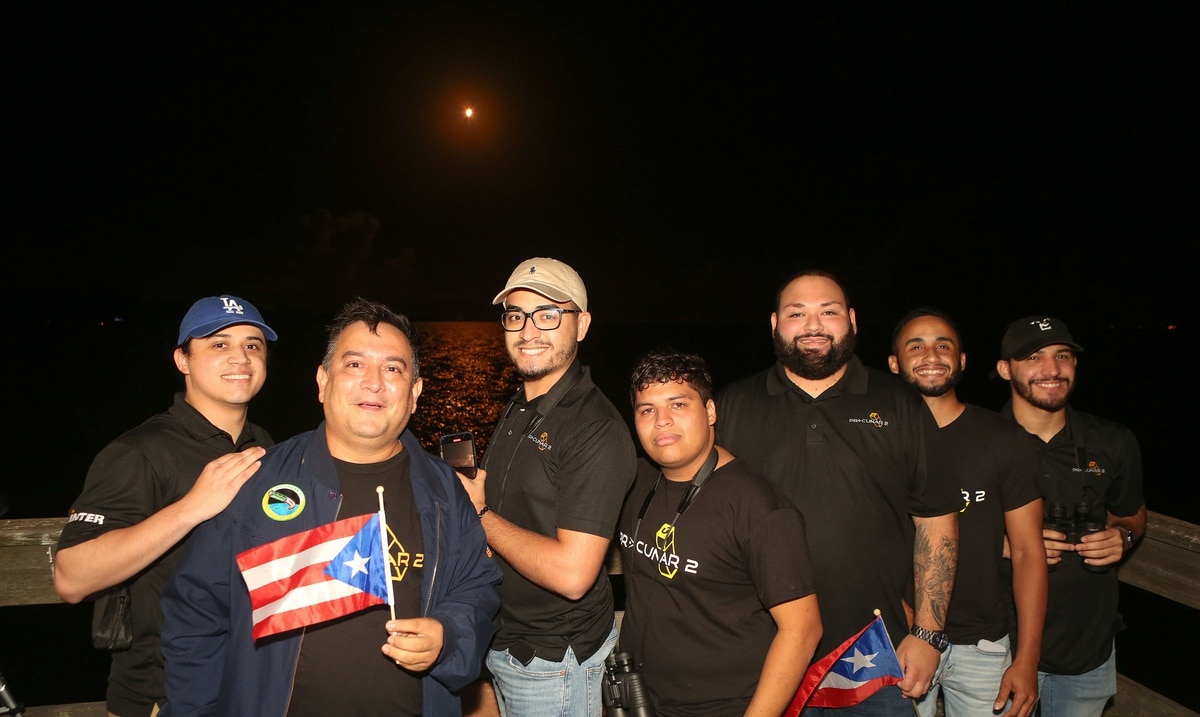 The first Puerto Rican satellite, the PR-CuNaR2, was successfully launched into orbit this morning from the International Space Station (ISS). The historic event was closely followed by the team of students from the Bayamón campus of the Inter American University of Puerto Rico and Professor Amílcar Rincón, who are the creators of the ingenious artifact and celebrated the moving moment with applause and congratulations.

The satellite was put into orbit around 8:30 am, according to the transmission from the ISS that could be seen on the screens of the laboratory of the School of Engineering at the Inter Bayamón campus. From that moment, Professor Rincón explained, PR-CuNaR2 will be orbiting the Earth and, if everything continues to go smoothly as it has been, by Friday it would begin to send the first signals.

“We hope that this is the example that Puerto Rico has talent and we have the capacity to develop everything that we propose. We are a country that, although small but with a lot of talent and a lot of desire to do things. I invite all the youth of Puerto Rico to continue studying, above all, careers that lead us to be a technological country. Let us continue dreaming! He who does not dream never gets anywhere, “Dr. Rincón said excitedly.

The satellite will function as a “floating laboratory” to, taking advantage of the conditions that exist in space, do experiments with “particles of different sizes and different materials” that are inside, and thus be able to investigate theories about the formation of planets , asteroids, and young stars, until it eventually runs out of life and burns up as it enters Earth’s atmosphere.

The professor explained that, once released to its orbit, about 30 minutes later the satellite would start to turn on its equipment, so that it could then carry out its experiments. In parallel, a control system would align it so that its antenna is “facing the ground”, and thus can send and receive signals. Then they would start sending signals from a station in Texas, and there they would receive “10-minute packages, in this case they would be video, and then we compact it and then create the complete video for future analysis” and subsequent publication in various media.

Rincón commented that the project began in 2014, with different stages, which included atmospheric balloons and other satellite prototypes, until it was possible to achieve a proposal that was accepted by NASA, after competing with other proposals that also wanted the aerospace agency to cover the cost and transportation necessary to put your satellite in space.

The achievement of the Inter team has had important repercussions for this university and others on the island. As explained by the professor, they are already working on another satellite project that, if they manage to take it into space, would remain within the ISS. There are also other projects in the pipeline, “because we have already received it, other universities in the United States want us to help them build another satellite. And that has also put professors from other universities, from the UPR (University of Puerto Rico) and private universities, to also collaborate in this phase, because this is an educational project ”.

He mentioned that there are universities interested in collaborating in New York, Michigan, the Central Florida University, “and one even in Turkey, who asked us to be a visiting professor to help him so that this university and others in Turkey can take off in the aerospace area. We have reached the level of Central America, South America, Argentina, Colombia. It has put Puerto Rico on the map in developing technology like this ”.

For his part, Jesús Marrero Colón, a computer engineering student and participant in the project as the leader in the area of ​​software and computers, commented that the launch and launch of the satellite “is great, it serves as motivation. It is a goal set and it motivates us to keep drawing more and more ”.

He added that in addition to the area of ​​computer engineering, students of electrical engineering and mechanical engineering also participated in preparing the PR-CuNaR2. In total, about 25 students were involved, although if the previous phases are counted, there have been about 65 participants.

PR-CuNaR2 was launched into space in the Falcon 9 rocket’s Dragon Capsule from Cape Canaveral, Florida, as part of SpaceX’s Mission 23. The next day, the Dragon Capsule made its docking at 10:40 am on the ISS, where the Puerto Rican satellite was until this morning.

The PR-CuNaR2 weighs 5.6 pounds and measures four inches wide by four inches long and 12 inches tall. It began development three years ago as part of NASA’s ElaNa 37 project. During its development, about 25 students from various engineering programs at the Interamerican University of Bayamón have participated. However, the first prototype of this microsatellite was built in 2013. From the creation of the first prototype to the completion of its construction and development, approximately 65 students, between women and men, have been part of this project. The satellite is constructed of aluminum, photovoltaic cells, batteries, and other materials that have been approved for use in space.

The satellite is ready to orbit for two years, but it could stay in space for longer. By integrating photovoltaic cells, the satellite charges its batteries, which are what provide it with the energy to function. Since PR-CuNaR2 has no propellants, it will be drawn into the atmosphere and disintegrate without creating space debris.

As part of the entities that have collaborated in the effort to develop this project are the NASA Puerto Rico Space Grant Consortium, the Central Florida University, the University of Michigan, the Florida Space Institute, the Aerospace Corp. company and the local companies Engiworks and Precision Experts.