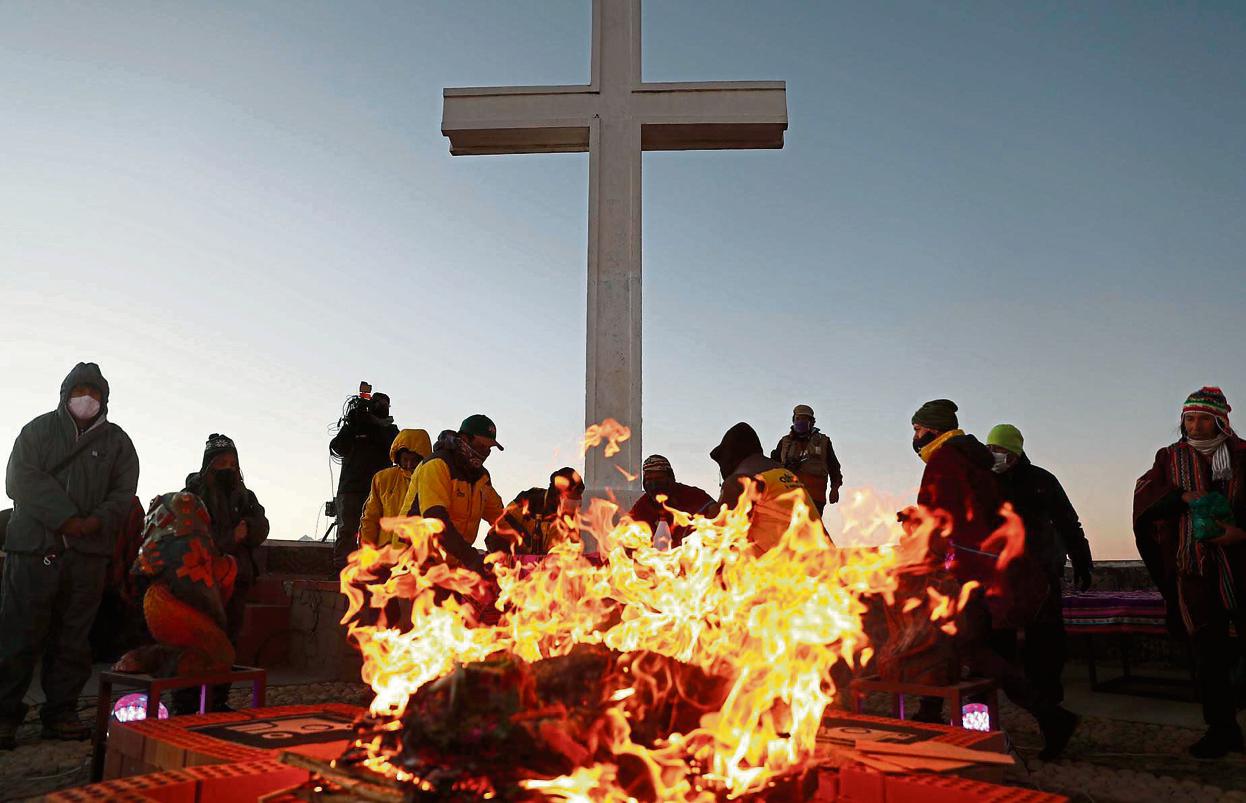 The Bolivian presidential plane, a Falcon 900 trimotor still adorned with the rainbow of the indigenous flag despite the change of regime, briefly last week became the latest front in a war of baseless accusations, false news and post-truths between Evo Morales and the de facto president, Jeanine Áñez.

According to a breakdown of the movements of the presidential plane FAB 011 prepared by the flight tracking company FlightAware based in Houston (EE.UU.), the presidential plane has made no less than 25 flights to Brazil since the resignation of Evo Morales in November of last year. FlightAware even identified a flight to Brasilia on November 11, just 24 hours after the resignation of the indigenous president.

The news first given in the Argentine newspaper Page 12 It seemed another indication of the involvement of the government of the far-right president Jair Bolsonaro in what many describe as a coup in Bolivia. Morales tweeted it from Argentina, where he has gone into exile to avoid an inevitably politicized trial in Bolivia.

But it remains unclear whether the flights detected by FlightAware – which has the world’s most comprehensive ADS-B satellite aircraft identification system – are real or phantom. The Air forces Bolivian women “categorically” denied the information and announced that “there has not been a single flight abroad in the current presidential administration.”

Perhaps it is a hoax of followers of the former president or the team of Luis Fernando Camacho, the ultra leader who, after leading the popular rebellion against Morales, has lost prominence. But FlightAware insists that “the flights that we have sent to the client are for an airplane with an identifying signal FAB-011”, as it affirmed, in an email to which it has had access The vanguard , FlightAware Director Myles Din. Although he added that “we cannot be 100% sure that all flights are from the same plane.” The mystery remains unsolved.

Six months after the resignation of Evo Morales, it is not known when there will be new elections in Bolivia


Days later, the Áñez Government, which is going through a serious popularity crisis due to a criticized management of the Covid-19 pandemic, returned the ball. A deputy minister, Israel Alanoc, accused Morales of having used the FAB-001 illicitly. The former president “has no morals; he used the presidential plane 147 times from 2010 to 2017, ”he announced.

An average of two flights a month did not seem like an accusation that would make the headlines even in the media most akin to Áñez. So Alanoca offered something juicier. Morales had flown to Punta Cana, in the Dominican Republic, in FAB-001 – he announced – accompanied by his young chief of staff, Patricia Hermosa. “What is (…) a secretary of his excellence doing accompanying the president on trips to Punta Cana?” The vice minister suggested.

The answer was easy for anyone seeking it to find. Morales, Hermosa and other members of the then presidential team flew to Punta Cana on January 24, 2017 to attend the V summit of the multilateral organization Community of Latin American and Caribbean States (Celac).

The false insinuation of Alanoca he had another target besides Morales. Hermosa was jailed on January 31 on charges of sedition and support for terrorism. The crime: processing the papers for the candidacy of the former president to the Senate elections (the electoral court vetoed Morales’ candidacy because he does not live in Bolivia …).

Pregnant upon entering jail in February, Hermosa had a miscarriage and has reported police harassment. She has not yet been summoned to testify. It is one of a series of cases of persecution against the allies of the former president in the new front of the legal war of the Latin American right.

Alejandra Claros, former Morales chief of staff, dismisses the accusations about the irregular use of FAB-011 by the former president as false news. “Evo Morales only made official trips on the presidential plane; instead, I suspect that the interim president has let her relatives move in the FAB-001, ”he said in a telephone conversation.

The scuffle over the presidential plane is one more example of a toxic political environment in Bolivia. The pandemic forced the postponement of the elections that were to be held on May 3. Last week, Congress, where Morales’ party, the Movement to Socialism (BUT) has a majority, set September 6 as the electoral deadline. He constitutional Court and all the candidates except Áñez support this calendar. But the president has refused to ratify it until a health report ensures that there will be no danger to the health of voters.

According to the latest polls, the MAS would have a chance of winning the next elections in the first round.

Meanwhile, there are more indications that the last elections should not have been annulled. There are already four independent studies that question the conclusions of the inspectors of the Organization of American States (OAS) who denounced evidence of fraud already on the same election night. The latest study conducted by three experts from American universities in collaboration with The New York Times “It has shown that the analysis of the Organization of American States contains errors,” according to the US newspaper.

Although some irregularities existed, “there is no evidence that these have been significant enough to change the result,” he explained to The vanguard one of the authors, Francis Rodriguez, from U

niversity de Tulane in New Orleans. Morales won in the first electoral round after registering the necessary difference of 10% against his rival, Carlos Mesa.

Despite US reports, the Supreme court Boliviano has just started criminal lawsuits against those allegedly responsible for the alleged fraud.