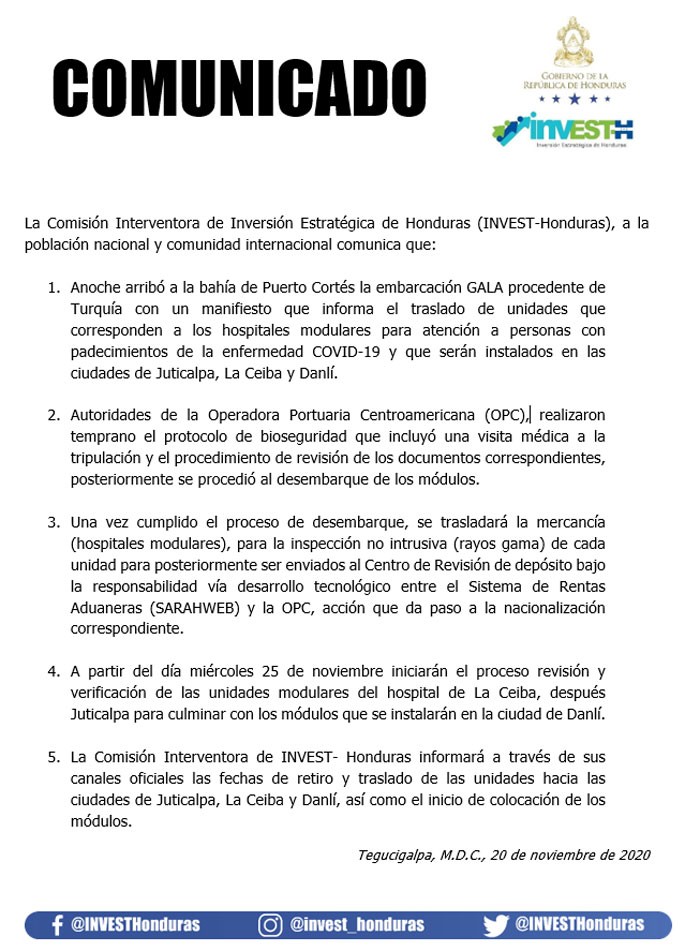 Tegucigalpa – In the last hours, the Gala Ship arrived in Puerto Cortés, northern Honduras, with the remaining three mobile hospitals purchased by Strategic Investments of Honduras (Invest-H) from Turkey, as detailed by the Audit Board of that State purchasing office , through an official statement.

The Gala ship that brought the mobile units is already in Honduras, it arrived in the country, after a long journey across the Atlantic.

At the end of October, Elmed Medical Systems Inc reported that mobile isolation hospitals in the cities of La Ceiba, Danlí and Juticalpa were already en route, according to a statement from Inversión Estratégica de Honduras (Invest-H).

Now that they have arrived at the port, the last three mobile hospitals of the seven purchased must pass the inspection process by the Public Ministry (MP).

In the letter published by Invest-H it is announced that as of next Wednesday 25 the verification process of the modular units will begin.

The reactions Regarding the dubious process of purchasing the seven mobile hospitals, they have not been long in coming, businessmen and some critics of the medical union, as well as other sectors, raise the urgency that the Public Ministry of continuity to the lines of investigation and justice is applied to those responsible for this new case of corruption as evidenced by the National Anticorruption Council (CNA).

Honduras acquired seven mobile hospitals through the intermediary Axel López, who in turn bought them in Turkey. The payment was made in cash since the end of April and to date only one of the sanatoriums works, the remaining six are in the process of installation and others have just arrived.

Invest-H paid 48 million dollars (1,200 million lempiras) in cash to businessman López, in an obscure transaction that so far has not registered charges in the courts of the Republic. LB