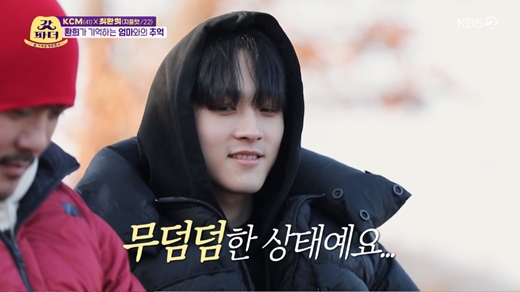 In KBS 2TV’s ‘Godfather’, which was broadcast on the 12th, KCM and Hwanhee Choi put a stamp on the family relationship certificate and formed a father-son relationship.

On this day, KCM left for fishing with Choi Hwan-hee. KCM, who arrived at the fishing spot, said, “My brother and I went fishing a lot when he was young. I think it was when he was in his first or second year. He went fishing for the first time and caught a very big one. It was so much fun.”

KCM showed Hwanhee Choi a picture of her childhood and a picture of her deceased father. He said, “(Dad) passed away early when it was very fun. From then on, I started exercising. I really don’t want to lose. I have two sisters at home and my mother is alone. As a son and a man, I tried to protect my family.” did.

He continued, “I always had my sisters at home, so I purposely wore shoes that were two sizes larger. I wanted to think of an adult.

Choi Hwan-hee also showed KCM a picture in his cell phone, saying, “I have something too.” A face-to-face photo with my mother when I was a child. When KCM asked, “Do you have any memories like this?” Choi Hwan-hee replied, “I have many memories (with my mother), but it’s been too long now, and I’m just in a dull state.”

In an interview with the production team, Choi Hwanhee said, “There are more memorable places than the last place I went with my mother. Swimming in the sea and swimming in the pool. I seem to remember those things.”

After that, KCM and Choi Hwan-hee stamped the family relationship certificate. KCM said, “It was strange. What was that piece of paper?” Choi Hwan-hee also said, “It just feels weird. It’s not really a family, but now there’s something on the papers, so it’s like a family. I think we’ve gotten closer.”