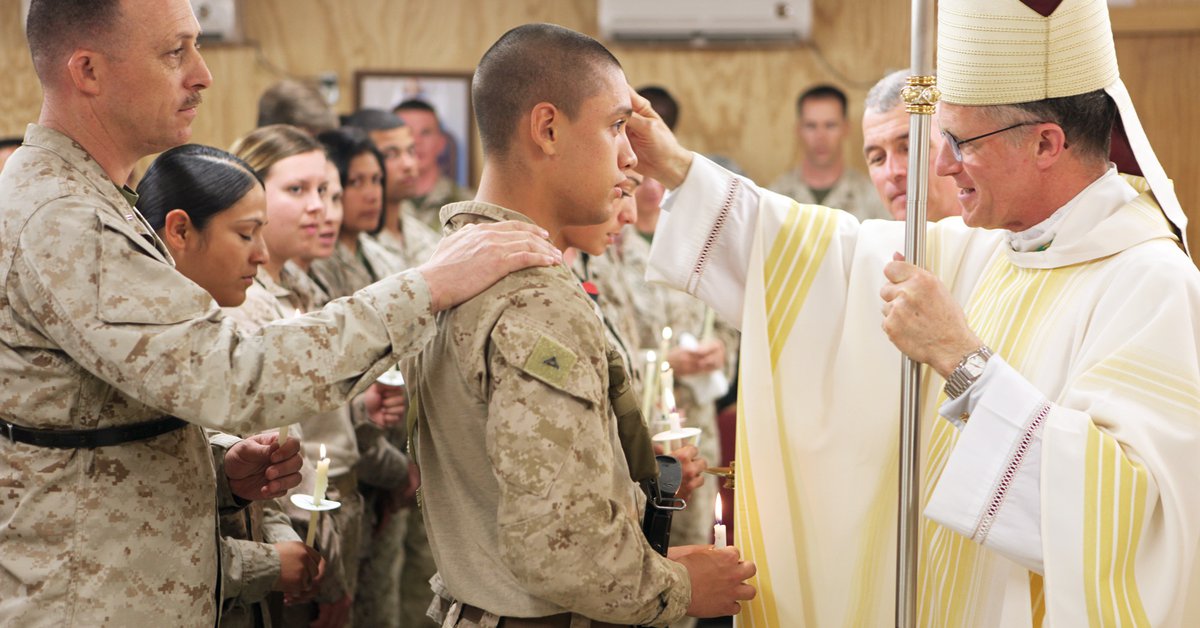 Archbishop Timothy Broglio, who is in charge of pastoral care within the US Armed Forces, during a baptism ceremony at Camp Leatherneck, Afghanistan (US Marine Corps photo by Cpl. Joshua Young)

(Chicago, special for Infobae) – The military archbishop of the United States armed forces endorsed the position of tens of thousands of Catholic soldiers who refuse to vaccinate against Covid. Maintains that Catholic troops should not be forced to receive the vaccine against coronavirus if it “violates the sanctity” of your consciencewhen there are hundreds of thousands of active duty service members who remain unvaccinated even though it is mandatory.

Archbishop Timothy Broglio, a conservative appointed by Benedict XVI in 2007, said in his written homily released this week that while the highest doctrinal authority in the Catholic Church has determined that getting vaccinated is not a sin, US troops may refuse vaccination on religious grounds. And he quoted Pope Paul VI, who wrote that a man “should not be forced to act contrary to his conscience.” He added that “despite the moral permissiveness of these vaccines, the Church treasures its teaching on the sanctity of conscience.”

Broglio heads the Archdiocese for Military Services, created by the Church in 1985, which serves more than 1.8 million service members and their families spread over 220 military installations worldwide. And while the decision to force or not to vaccinate the soldiers is made by the central command of the Pentagon or directly by President Joe Biden, the opinion of the highest authority of the Catholic Church within the armed forces underpins the position of the ultraconservatives who refuse to be immunized because they erroneously claim that vaccines “have a compound of human cells taken from aborted fetuses.”

Within the US armed forces, there is strong opposition to the Pentagon’s mandate to be vaccinated against Covid on a mandatory basis. KC Wilsey / FEMA

Broglio’s letter addresses the subject in an ambiguous way. It begins with an explanation of how the Pfizer and Moderna COVID-19 vaccines that were tested using a “cell line derived from abortion” are not yet considered sinful by the Catholic Church because it is “Remote material cooperation with evil.” “The Congregation for the Doctrine of the Faith examined these moral concerns and judged that receiving these vaccines ‘does not constitute formal cooperation with abortion’, and therefore it is not sinful, ”says Broglio’s letter. However, the Johnson & Johnson vaccine “was developed, tested and produced with cell lines derived from abortion,” the archbishop said. And he added that Catholics can still accept that vaccine, but only if no others are available and they make their moral objections known.

Broglio’s statement comes as there are still hundreds of thousands of US military service members who refuse to vaccinate or are only partially vaccinated. In August, President Biden ordered military leaders to make full Covid vaccination mandatory by December. At that time there was still 2.1 million soldiers without immunization. Since then, 90% of active members of the Navy, 81% of the Army and 76.5% of the Marines have been vaccinated. The units of lhe National Guard and Army Reserve, which make up a quarter of total military personnel, are the most problematic and has a low percentage of immunized despite having suffered among its ranks 62 deaths from the disease. About 250,000 service members were infected with the virus since the beginning of the pandemic, according to Pentagon data. In the last three months, with the appearance of the Delta variant of the virus, infections, hospitalizations and deaths among uniformed men increased.

Broglio’s position is opposed to that marked by Pope Francis. The Vatican imposed a vaccination mandate on its own territory and the Argentine pontiff described getting vaccinated as “An act of love” and “a simple but profound way of promoting the common good and caring for others, especially the most vulnerable.” The archbishop’s statement is also significant in the American political context because it comes at a time when there is a heated debate about religious exemptions for the vaccine. And it happens when The Biden Administration tries to impose the obligatory nature of vaccination before an ultra-conservative, religious sector that supported former President Trump who opposes being immunized. On Tuesday, a federal judge in New York ruled that New York state could not impose vaccination mandates on healthcare workers unless employers were allowed to consider religious exemption requests.

Archbishop Timothy Broglio received by Pope Francis. He was appointed to the military post by Benedict XVI and faces the opinion of the Vatican that supports universal vaccination. (Vatican photo)
See also  The worst day for Florida and the United States. Two die in Miami-Dade from the coronavirus - El Nuevo Herald

The funny thing is that Archbishop Broglio changed his position in recent weeks. In August, he was cited by the Catholic News Agency as supporting the Pentagon’s vaccination mandates. He said that the church, including Pope Francis, “He had recognized the morality of the vaccine.” But, as he acknowledged in his homily, he backed off after some service members requested exemptions through the Religious Freedom Restoration Act and questioned whether the Church encourages troops to get vaccinated. The law was enacted in 1993 and in recent years has been invoked by conservative Christians who say it protects their rights. Along these lines, Broglio expressed his preference for the troops to receive the vaccines from Pfizer-BioNTech and Moderna, instead of the one from Johnson & Johnson, because the latter contains human cells “extracted from aborted fetuses.” According to the Department of Health and Human Services, the vaccines developed to combat Covid they do not contain fetal cells. The version that was disseminated on Trumpist and ultranationalist Internet sites, as well as on social networks, it is a typical “fake news” based on the fact that some vaccines developed in the 1970s and 1980s did contain fetal cells. Since then, the cells “grow in the laboratory.”

The truth is that Broglio adhered to that erroneous theory in his homily and invoked both legal and moral reasons. “The denial of religious accommodations or the adoption of punitive or adverse measures for staff against those who raise serious and conscientious objections, would be contrary to federal law and morally reprehensible”Broglio wrote, pointing to the religious protections of the First Amendment to the US Constitution. However, he clarified that those who remain unvaccinated should maintain the use of masks and practice social distancing.

The homily of the military archbishop caused concern in liberal sectors in Washington and in scientific circles that promote vaccination as a way out of the pandemic. They fear that their message will be imitated by ultra-conservative religious leaders from other churches. This could further agitate the extreme social and political divide that reigns today in the United States and much of the rest of the world.