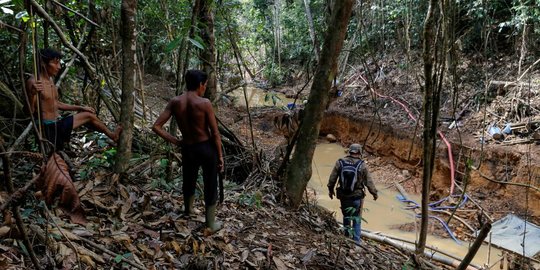 Merdeka.com – Police Brazil’s federal government said yesterday it was still investigating the alleged rape and death of a 12-year-old Yanomami girl by illegal gold miners, but cast doubt on the veracity of the allegations.

Officer police who led the investigation, Daniel Ramos, told reporters interviews with members of the community of Aracaa village in the northern state of Roraima yielded contradictory information, raising doubts about the case.

“The nature of the complaint does not match the concrete and concrete facts,” Ramos said at a press conference in the state capital Boa Vista.

Reports of rape and death made last week by the Yanomami Condisi health council, which said miners had kidnapped the girl, were followed by reports the village was burned to the ground and its inhabitants had disappeared.

Ramos said Yanomami residents had moved to another village. Representatives of the natives said the villagers fled into the forest to get away from the gold miners after the girl died.

The Yanomami people live next to the border with Venezuela in Brazil’s largest nature reserve which has been attacked by thousands of miners seeking gold illegally, causing river pollution, shooting incidents and other abuses.

The massive mining effort has brought disease, violence and gross human rights abuses on the Yanomami people, according to a recent study blaming high gold prices and tacit support from the government.

The hunt for gold in the protected Yanomami lands intensified under President Jair Bolsonaro who backed legislation to allow commercial farming, mining and oil exploration in indigenous reserves.

The Federal Police said in a statement that while investigating the death of the Yanomami teenager, it destroyed the supporting infrastructure of a nearby gold miner, including the burning of 17,000 liters of fuel.

See also  After Failing to Destroy, the West Turns to Terror against Russia

No arrests were made.

In Brasilia, human rights activists gathered outside the government’s customary affairs agency Funai to protest the lack of state protection for the Yanomami people.

The prosecutor working on the case did not respond to a request for comment. [pan]

Read also:
Portrait of Brazilian Rural Women Demonstration Calling for Protection and Rights
Indonesian Fashion Designer Allegedly Ordered Human Organs, Police Contact Brazilian Police
Hundreds Died and Nearly 200 Missing When Floods Hit Brazil
Floods due to heavy rains hit Brazil, thousands of people were forced to evacuate
For the sake of giving a Christmas present, Santa Claus is willing to walk along the Amazon River
Hundreds of Rafts of Illegal Miners Dredge Gold in the Amazon River
Deforestation in the Amazon is 17 times the size of New York City, the worst in 15 years
Brazil investigates suspected cases of mad cow disease in humans