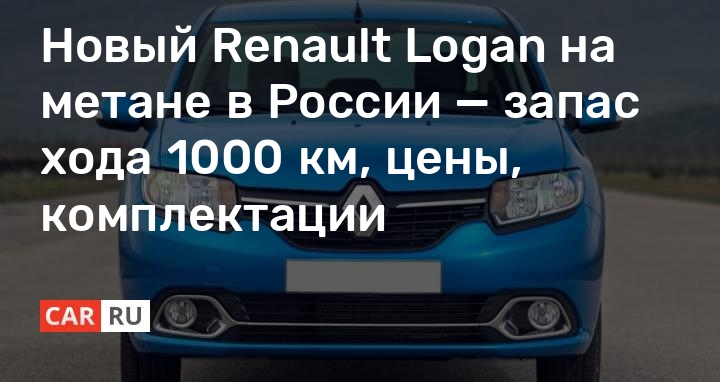 The first information about the dual-fuel modification of Renault Logan appeared at the very end of 2021.

And right at the beginning of 2022, they began to talk about the car as a profitable option for buying. While mass production will only be getting better in Tolyatti, it’s time to talk about the features of the car and its prospects.

Initiator of Logan dual-fuel solutions. The development of the Renault Logan CNG project was a company that had previously shown itself in the “gasification” of Lada models. The CNG index was once received by the Largus and Vesta models.

The enterprise of the ATS Group of Companies took the Renault Logan model with an 82 hp engine for revision. The gas cylinder was placed in the luggage compartment, and at the same time they did not specify how many liters the additional equipment took away from the indicator of luggage capacity.

Technical features. The installed cylinder in the luggage compartment holds up to 90 liters of methane. In conjunction with a 50-liter gasoline tank, the autonomy of the course will be at least 1,000 km. It is unlikely that such an indicator is relevant for Logan from the standpoint of a family trip, but the frequency of refueling for commercial use of the car will decrease.

Factory installation of equipment for operation of the engine on gas engine fuel ensures reliable operation. Fuel consumption is in some cases 3 times lower compared to gasoline.

When starting the power unit, gasoline is used, and after that, work is automatically transferred to the consumption of compressed (compressed) natural gas. The remaining gas in the cylinder is reflected through the light indicator. This allows you to prevent excessive consumption of gasoline, and replenish the supply of methane.

The transition to work from one type of fuel to another is carried out, including manually. The button with a tape of indicators of the used fuel and the remaining gas is located in the area of ​​u200bu200bthe ignition switch.

It is reported that only the Logan Life modification will be used for conversion. Options for this version of the machine include:

Nothing is specified on the color preference of models for conversion. For example, such white cars are most popular in taxis.

Instead of a conclusion… On the prospects. The greatest demand for Renault Logan CNG is expected from corporate transport. And the motive here is clear – reducing fuel costs during daily operation.

In addition to taxi services, the service sector for the delivery of ready-made food products and products is now actively developing. It is not excluded the revival of demand for the model and on the part of individuals, if the annual runs of the car are high.

The price of the car will become known with the start of its production. Orders for the car will begin to accept in January 2022. If we take into account the price of Renault Logan in the Life version, then the demand for the car is provided, provided that the car does not transfer after the initial 839 thousand rubles psychological barrier of 1 million rubles. And then we can confidently say about the steady demand for a car for the next few years.