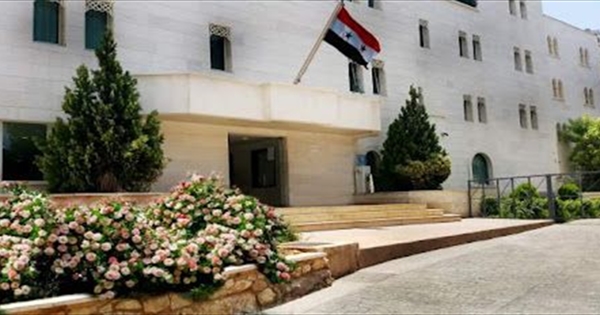 Accusations by Syrian opponents of their country’s embassy in Beirut of kidnapping five activists “who were lured to the embassy building east of Beirut” sparked confusion in Lebanon with the embassy denying the news, and the denunciation of Lebanese political parties, before it became clear that the five were arrested by the Lebanese army on charges of “stealth entry”.

Asharq Al-Awsat learned that the young men were stopped at a Lebanese army checkpoint near the Ministry of Defense, a route that the Syrians take to go to their country’s embassy, ​​and are subject to checking their identity papers due to the sensitivity of the security site.
Syrian opposition websites had indicated that five young Syrian activists entered the Syrian embassy in Beirut and did not leave. They are Tawfiq Al-Hajji, Ahmed Ziyad Al-Eid, Ibrahim Majid Al-Shamri, Muhammad Abdul-Ilah Suleiman Al-Waked and Muhammad Saeed Al-Waked.
According to the opposition websites, the kidnappings were carried out by luring the “victims” to the embassy to receive passports, and as soon as they arrived at the embassy, ​​security men in uniforms attacked them and arrested them inside the embassy premises.

The Syrian ambassador to Lebanon, Ali Abdel Karim Ali, denied the news. He said in a television interview: “The news of the disappearance of 5 Syrians is not true, and no one was arrested inside the embassy.” Ali pointed out that “there are exaggerations, and he will follow up on the matter.” “We are in contact with the Lebanese army and, God willing, we will get an answer,” he said.
Later, the Intelligence Directorate of the Lebanese Army announced that it had referred two Syrians to the General Directorate of Public Security, based on a reference by the Military Public Prosecution, for their surreptitious entry into Lebanese territory and their illegal presence there.
The Intelligence Directorate in the Yarzeh-Baabda area also arrested four Syrians who had illegally entered Lebanese territory with the help of smugglers. The “Progressive Socialist Party” had warned of the “recurring cases of Syrian citizens’ disappearance when they visited their country’s embassy in Lebanon without any justification, without any explanation or clarification of the legal situation, and without clarifying their fate, in a step that is least said to be a violation of all international covenants and norms. the laws in force, the Lebanese sovereignty, and the principles of human rights.” Considering that this “worries about the extent to which the Lebanese official institutions adhere to the relevant resolutions that require the protection of those fleeing from killing and destruction, and raises legitimate questions about the fate of the various Syrian opponents who entered Lebanese territory in various ways to escape arrest, torture and death.”
He warned against “passing such violations under the misdemeanour of the heavy crises experienced by the Lebanese.” He asked the Ministry of Foreign Affairs what it would do about this serious violation of the sovereignty of the Lebanese state on its lands, and said that this raises the question of those who demand the return of Syrian refugees to their country about the model that such The dangerous phenomenon of the supposed “safe” return.
The party put the incident of the disappearance of five Syrian youths when they went to the Syrian embassy last week “in the form of local and international human rights institutions, and in the form of the Lebanese General Security, which is entrusted with the implementation of official decisions not to deportation in a coercive manner, and to draw the Lebanese state or what remains of it, which is required to prevent such humanitarian violations no matter what. The conditions were.
Subsequently, the General Directorate of Public Security responded to the Progressive Socialist Party, declaring that “all the return trips organized by the Directorate during the past years were unremarkable, and no incident was recorded with any Syrian citizen who returned to his country under the auspices of Public Security and under the supervision of the United Nations agencies operating in Lebanon.” .