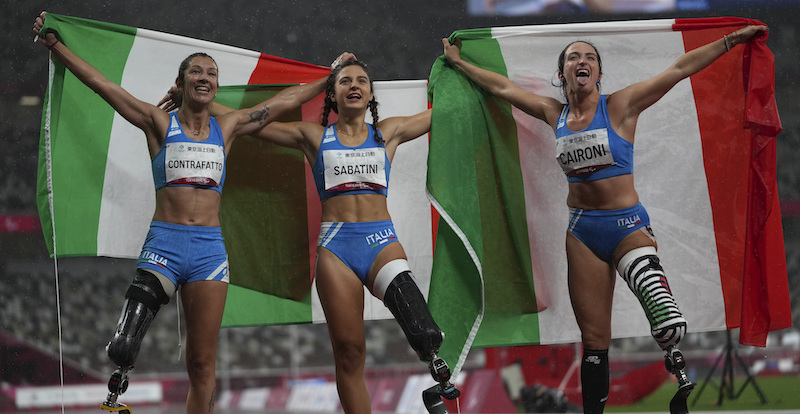 Today, Sunday 5 September, the closing ceremony of the sixteenth edition of Summer Paralympics, which began on August 24th. Italy participated in the Tokyo Games with its largest delegation ever: 115 female athletes and athletes, including 69 rookies. And 69 is also the number of Italian medals obtained in this edition of the Paralympics, the second best result ever for the number of medals received in an edition.

Italy finished in ninth place in the medal table. In first place came China, with 207 medals, followed by the United Kingdom and the United States, respectively with 124 and 104. The Italian record of medals won at the Summer Paralympic Games is that of the very first edition of Rome 1960, in very different times, when Italy came first by winning 80 medals: 29 golds, 28 silvers and 23 bronzes. Before the Tokyo edition, the second best performance ever was that of Seoul 1988, when the medals obtained were 58.

Italy won its last three medals from the Tokyo Games on Saturday 4 September, during the eleventh day of the Paralympics, and it was not an occasion like any other. Ambra Sabatini, Martina Caironi and Monica Contrafatto have indeed won all three medals of the podium in the women’s 100-meter athletics competition in the T63 category, dedicated to athletes whose legs have been amputated above the knee. Sabatini, who won the final setting the world record with a time of 14.11 seconds, finished ahead of Caironi, who in turn had won gold in the same race at both the London 2012 and Rio 2016 Games. Contrafatto had also won bronze in Rio.

For the Italian delegation, great satisfaction came from various sports, including athletics, cycling, fencing, archery, table tennis and dressage, an equestrian discipline in which the horse and its rider must perform exercises and figures with grace and precision. The discipline in which it has distinguished itself the most is swimming, in which Italy has won a total of 39 medals: 11 golds, 16 silvers and 12 bronzes.

Not just names, but a source of daily inspiration: 69 medals, Thanks Azzurri ????#Paralympics pic.twitter.com/YC7SjvX4tK

The first Italian medal at the Paralympic Games she arrived right in swimming with Francesco Bettella, who on Wednesday 25 August won the bronze medal in the 100 meters backstroke category S1. A few hours later, the twenty-year-old from Turin Carlotta Gilli won the gold in the final of the 100 meters butterfly category S13, the first Italian gold, setting the Paralympic record of the discipline with a time of 1 minute and 2.65 seconds. The silver medal of the same race went to another Italian, Alessia Berra.

From the first day of competitions, various medals arrived every day for the Italian delegation, in particular from swimmers who in most cases have won more than one medal: among these, for example, Arjola Trimi, who won two golds and two silvers, or Giulia Terzi, who like Gilli won two golds, two silvers and a bronze in the races in which she competed. The most awarded swimmer of all was the 23 year old from Veneto Stefano Raimondi, who won a total of 7 medals: one gold, four silvers and two bronzes.

In addition to the 11 golds obtained in swimming and that of Sabatini, the highly anticipated one in the women’s individual foil with the 24-year-old fencer also arrived Beatrice “Bebe” Saw, one of the best known and most influential Italian Paralympic athletes. Vio, who among other things the day after the victory told of having recently risked the amputation of an arm, also won thesilver in the team competition together with teammates Andreea Ionela Mogos and Loredana Trigilia.

On Thursday 2 September another gold arrived from the team handbike race thanks to Luca Mazzone, Paolo Cecchetto and Diego Colombari, who dedicated their medal to former Paralympic rider and athlete Alex Zanardi, who in June 2020 he had been involved in a serious accident near Siena during a handbike race.

– Read also: Bebe Vio said she risked having an arm amputated in April

Saturday’s ceremony concluded with a short speech by the president of the Tokyo Games Organizing Committee, Seiko Hashimoto, followed by Andrew Parsons, president of the International Paralympic Committee. The flag that symbolizes the Paralympic Games has been lowered and folded, while the flag of France, the country that will host the next Games in three years, has been hoisted next to the Japanese one. At around 15.00 Italian time the Paralympic brazier was turned off and the Paralympics were declared over.

See also  Battlefield 6 is to ensure a great war. First leaks about the new DICE game