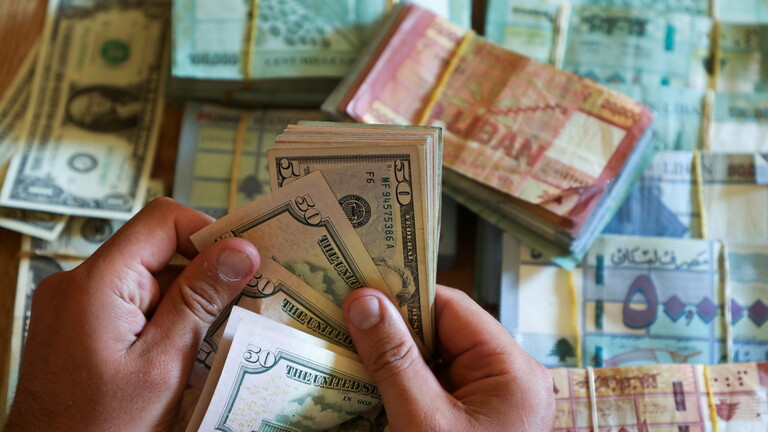 The Lebanese pound and the dollar

It seems that the pressure on the Bank of Lebanon from the Ministry of Finance and the Finance and Budget Committee to raise the dollar exchange rate for monthly bank withdrawals according to Circular 151, whose effects expire on the 30th of this month and is set at 3900 pounds, will not bear fruit, according to the odds.

The data changed today with the formation of the government and the dollar exchange rate fell from 19 thousand pounds, knowing that “the increase in the exchange rate must happen inevitably, but not today, and it may be at another time after controlling the uses, not on paper, but through payment cards that require incentives for points of sale.” The former head of the Banking Control Commission, Samir Hammoud, confirmed to “Nidaa Al-Watan.”

Hammoud added: “The Governor of the Banque du Liban, Riad Salameh, may be waiting to see if the government will be able to put in place a general framework to address pricing, exchange, and the banking “issue” even in its broad outlines, and not to pre-empt matters,” knowing that the increase in the exchange rate will increase losses for him because the “Central Bank” He buys the dollar in the central bank at a price that exceeds 1500 Lebanese pounds, then pumping the Lebanese pound into the market will put pressure on the money supply and increase pressure on money changers to buy dollars.

Regarding the incentives that can be given to points of sale, Hammoud suggests that they be “by opening accounts for those points to collect payments via cards that can be used to buy dollars through the BDL platform.”

After the Central Bank initiated the Finance and Budget Committee to conduct a study on the effect of the actual and practical increase in the exchange rate on the monetary mass, and the inflationary implications of this matter and the rise in the dollar exchange rate, and after the absence of attendance for the two previous sessions, the Committee will hold a meeting today at eleven in the morning, to continue listening To the Ministry of Finance, the Banque du Liban and the Association of Banks regarding setting the exchange rate for monthly withdrawals from banks, according to Circular No. 151 issued by the Banque du Liban.

It is expected that the quorum will be completed today, with the Central Bank of Lebanon, as “Nidaa Al-Watan” learned, the fourth deputy governor of the Banque du Liban, Alexandre Moradian, who had previously warned of the inflationary repercussions of raising the ceiling of 3900 pounds to the bank dollar. If the quorum is not reached within the specified time, the committee shall hold a second session at half past eleven before noon of the same day.

In a clarification of the atmosphere available to the Finance and Budget Committee about the outcome of the session, its Chairman, Deputy Ibrahim Kanaan, explained to “Nidaa Al-Watan” that the attendance is supposed to be completed, and the committee is awaiting the studies of the Banque du Liban that it promised over the past month on what he called the risks of inflation and its impact on the exchange rate. Note that the Ministry of Finance confirmed its insistence on the necessity of amending Circular 151 in relation to the monthly withdrawals, i.e. the 3900 pounds.

See also  Scientists: no football and festivals until the end of 2021 Inland

Regarding the inflation rates that could be caused by the option of raising the exchange rate of monthly withdrawals or raising them with the splitting of payments between cash and a credit card, Kanaan said: “We are waiting for the studies of the Banque du Liban, but all consumer goods have risen in prices and therefore it is supposed to absorb this increase (…) The most important thing is to secure the rights of depositors with their deposits in dollars, and this needs the central bank to set a future vision, not to continue to increase the number of exchange rates.”

But does he lay down a banking vision before starting negotiations with the “International Monetary Fund? Kanaan answers: “The future plan is required before and in parallel with the start of negotiations, as this situation cannot continue.”

So, the depositor who did not benefit from Circular No. 158, that is, did not get part of his deposits “cash dollars” and part according to the price of 12,000 pounds, he will remain a victim of the depletion of his life’s earnings under the umbrella of unregulated “haircuts”, by receiving his deposits in foreign currencies, in cash In Lebanese pounds, according to the exchange rate of 3900 pounds to the dollar, i.e. a loss of about 76%, if we calculate the exchange rate on the black market according to its price yesterday, which amounted to about 16,500 Lebanese pounds.